At the Vancouver Art Gallery, the strength of the work in “Residue: The Persistence of the Real” was often lost in the shuffle. Lee Plested reviews. 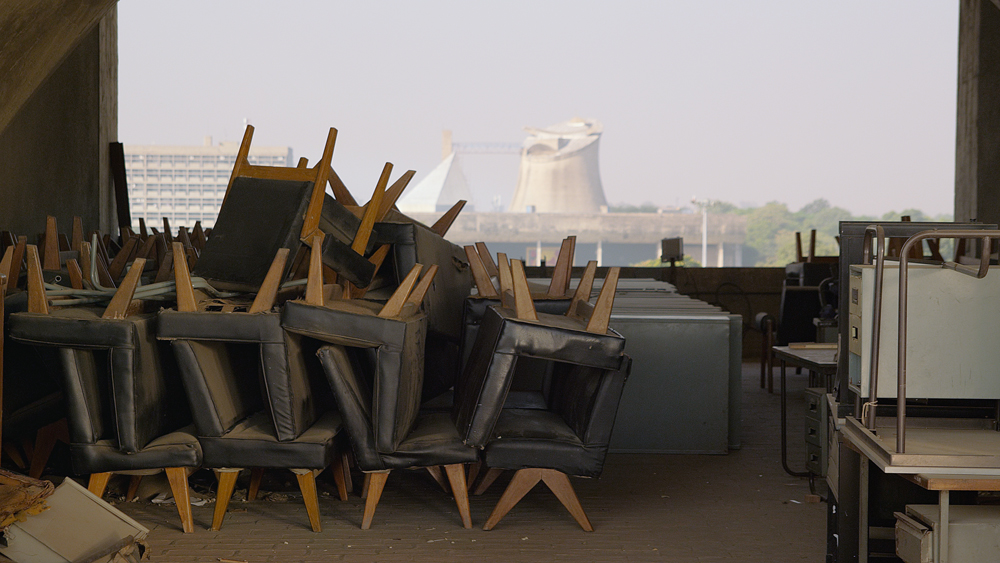 Describing the documentary impulse of his exhibition “Residue: The Persistence of the Real,” Vancouver Art Gallery curator Grant Arnold identified a common interest in the artists’ use of historic photographic methods to articulate a present truth. Foregrounding the philosophical problem of picturing the “Real,” he explained that, since the early 20th century, art found itself “in modern and ‘post-modern’ paradigms in which its role was to contest rather than reproduce or directly reflect reality.” While maintaining that the exhibition didn’t propose any generalized account of its artists’ methods, he explained it had been organized as a presentation of contemporary art “in which meaning is amplified through the proximity of the different bodies of work.” This emphasis on placement and associated connotations became central to my experience of the show.

The standout research documentary here is Amie Siegel’s Provenance. This luscious video traces the contemporary movements of the furniture that Pierre Jeanneret and Le Corbusier chose for the city of Chandigarh, India, Le Corbusier’s only constructed, fully planned city. Thoroughly European in its Modernism, the city was commissioned in the 1950s, and local artisans made the furniture, sourcing Indian teak and luxury upholsteries. As with other Modern architectural masterpieces (Arne Jacobsen’s SAS Royal Hotel in Copenhagen, for example), elements of this fully designed environment are being sold off to make way for the new. The dislocated chairs become near-pornographic figures full of exotic, reclined elegance. Some are marked in gold Arabic script, others simply numbered. All the powers of Hollywood are evoked in Siegel’s captivating revelry. Siegel further marks the chairs’ desirability with analytical footage of them being conditioned, documented and scooped up at auction for exorbitant prices.

The economic journey in Provenance is postscripted by the film Lot 248, which documents the sale of Provenance (one from an edition of five) at Christie’s, and was projected on the backside of the same freestanding wall. It peeled away additional layers of value and exchange in this global epic. In a third related piece, Proof (Christie’s 19 October, 2013), Siegel took the printer’s proof of the auction-guide page featuring Lot 248 and froze it in thick lucite. Unfortunately, this jewel-like, conceptual nugget was difficult to recognize as an artwork—the understated piece was hung in such close proximity to the wall text that I mistook it for a diagram. Friends who had seen the show couldn’t remember it or didn’t realize it was art. Overhanging is such a persistent mode for the VAG that I’ve wondered if they work to quota. Hypothetically, I am not against this: the critical problem is when it suffocates the aesthetic experience of art.

In a neighbouring gallery, Robert Burley’s The Disappearance of Darkness mordantly documents the closure of redundant film-photography facilities. One of the Kodak labs was imploded, and Burley’s images capture the trigger-happy fans snapping away at the scene. The project documents each location with a progression or grid of photographs that are hung at the VAG cheek by jowl like gig posters on the street, left merely to communicate their event. I longed for the clear and ordered methods of the Bechers, a classical conceptualism based on exposing the world through stripped-down aesthetics in elegantly proportioned grids of images.

The cramped install reached a fever pitch with Catherine Opie’s phenomenal photographs of Elizabeth Taylor’s home and possessions. Opie was introduced to Taylor by their shared accountant, and inverted the Warholian precedent in documenting her by turning her camera to the actress’s material concerns. These are some of the most painterly works I’ve seen by Opie. Details from Taylor’s wardrobe are enlarged and run in sequence as blocks of colour and texture, rich and saturated. Together they communicate the power of a large Pop painting, made from the layered signs of American spectacle and wealth. Equally artful is the non-focus she uses to realize the emotional refractions of desire in her blurry-eyed close-ups of Taylor’s famous jewels. These impressionistic portraits are printed large and hold their walls; they are documentary photography as painting. Handfuls of auxiliary images from the 700 Nimes Road portfolio, however, while absolutely interesting and useful for expanding Taylor’s story, were hung in distracting volume and proximity.

Stan Douglas’s Luanda-Kinshasa recreates a hypothetical jazz-fusion session at the Church, Columbia Records’s famed studio on 30th Street in Manhattan. Douglas harnesses his usual depth of research and exacting production methods. In his pans of the studio, he employs outtakes and alternate views, another signature of his work, pointing our attention beyond the central narrative. Yet within this exhibition I found myself focusing more on the objects of the recreation than the symbolic potential of the free-jazz stylings being “discovered.” This aspect was possibly amplified for me by encountering Luanda-Kinshasa after a room of Babak Golkar’s reconfigured commodities from The Return Project. Here, Golkar buys objects from chain stores (say, Winners), documents them and then artfully reconfigures his purchase (taking a portion away to become a sculpture that he shows with the finished photographs), re-documents the altered commodity and finally returns the mutated object to the store with his original receipt. I was unable to shake off their fetish appeal and think abstractly through Douglas’s complex work, which utilizes materialist history to reveal social shifts, rather than enact a Möbius strip of consumptive behavior. Douglas’s thoughtful historic consideration became a well-decorated musical break rather than a marker of potential social change.

Brian Jungen and Duane Linklater’s film Modest Livelihood tracks the artists on a series of moose hunts in Northern British Columbia. The work is silent, with Jesse Cain’s cinematography capturing one rich vista after another. This subtle film was neighboured by Geoffrey James’s documentation of Kingston Penitentiary, including pictures capturing the prison’s designated “Aboriginal Grounds.” Within these images, James shares a moving and intimate material culture, yet, crowded into an overpopulated display these photographs of the inmates’ traditional rites read like documents of institutionally directed therapy. The inclusion of these Indigenous images may highlight these realities and bring attention to their respective issues, but for me the dialogue between the works came off as tokenistic and left room for viewers to lapse into racist generalizations that only perpetuated common misunderstandings of Indigenous oral history and ritual.

In the end, a general lack of attention to the abstract and aesthetic qualities of these works impaired their presentation. If by “residue” the show means the insistent presence of real-life problems in works of art, this grimy spectre appeared as a preoccupation with the didactic elements of near-documentary artworks. The lack of careful consideration to their autonomy and artfulness led to the foregrounding of social issues as their prime concern, leaving the works unable to communicate their full power. If art is to survive the insistence of addressing our time, it will need to affirm a little more space for its aesthetic form of debate.