An interview with the photographer who spent six months shooting one of Canada's most notorious prisons for a new book and exhibition. 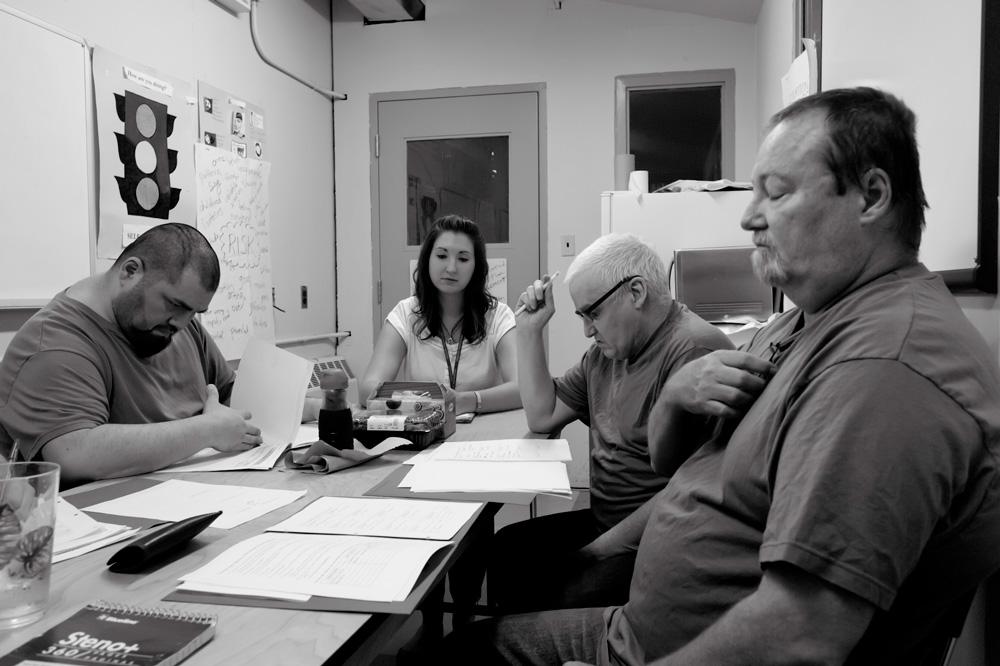 From Piranesi’s famed 1700s etching series Imaginary Prisons to Netflix’s second-season 2014 finale of Orange is the New Black, fictional images and narratives of imprisonment have become part of the vis-cult zeitgeist. But views inside actual prisons and incarceration facilities are much rarer, and much harder to come by. That changes in Geoffrey James‘s new book Inside Kingston Penitentiary, out October 1, and in James’s related exhibition at the Agnes Etherington Art Centre in Kingston until December 7. The Kingston Pen, of course, closed in 2013 after some 180 years as one of Canada’s most notorious maximum-security facilities. (Before closure, in fact, it was one of the oldest prisons in continuous use in the world.) Here, Geoffrey James speaks with Rosie Prata about his unprecedented images of the jail, his interactions with inmates and officials there, and his unexpected learnings along the way.

Rosie Prata: You spent the spring and summer months of 2013 documenting the “enclosed world” located within the walls of the Kingston Penitentiary, just before it closed in September of that year. What drew you to investigate this notorious institution?

Geoffrey James: I decided to try to photograph the prison when I read it was closing. There has been little photography of the institution in its 178-year history—not even the guards can take cell phones in (although that broke down at the end)—and I figured it was important to have some kind of record of it as a working institution.

RP: How did you gain access to the prison?

GJ: I went to Jan Allen at the Agnes Etherington Art Centre because I respect her professionalism, and also because I thought it would be good to have an institution behind me. We took our time preparing a serious proposal, and luckily the new regional commissioner, Lori MacDonald, had been at the Prison for Women when it closed and had seen how the institution became something quite different when there were no inmates. The warden told me that they were flooded with requests, but that mine was the only one that had no agenda.

RP: Who was responsible for pairing you with the inmates and officials you met? Did they meet with you of their own volition, or did you seek out specific representatives of groups/cultures within the prison community?

GJ: I was always accompanied, but had pretty much free access to the whole institution, with the exception of the administrative segregation wing, which housed people such as Paul Bernardo and Russell Williams. I couldn’t go into the ranges, as they call the cellblocks, when the inmates were out of their cells. Early on I photographed on one of the ranges when everyone was locked up, but it seemed wrong and inappropriate.

RP: As evidenced by your essay, you also conducted intensive research into the history of the prison, as well as the history of punishment and incarceration in our society. Your revelatory findings are equally shocking and compelling. Did you do your research before you started visiting the KP and meeting with prisoners and prison officials, and, if so, did this guide your artistic investigation?

GJ: I did some reading, but I am not one of those people who over-prepare. I work very much in the moment, although I decided to do the text myself, and later did quite a bit of research. In a way, I wanted to write what I couldn’t show.

RP: What was the mood like inside a maximum-security prison?

GJ: It’s hard to convey how complex a maximum-security prison is. Not an easy place to be, and when I would go out for lunch or supper, the disjunction between inside and outside gave me an idea of what it must be like to be a drone pilot. Everyone admitted as a prisoner (a term no one uses anymore—there is a distinct slide to euphemism in the official language) is given a lot of psychological and background assessment, and the ranges become distinct communities—some with terrifying levels of testosterone and aggressiveness—and others where people just put themselves quietly to bed every night.

There was a staggering range of people in that prison—with all kinds of problems, and I found quite a range of attitudes on the part of the correctional officers who accompanied me, too. There is so little to do there. A lot of inmates do janitorial chores for $5.80 a day, and there is quite a bit of emphasis on programs addressing violence and sexual offences, but very little to prepare people for the outside world. As more than one officer said, it’s basically a warehousing operation, with TV and PlayStations being the pacifiers, although there is a great number of inmates taking psychotropic medication. There is a strange tension to the place.

RP: Do you feel that you remained an objective observer throughout the course of the project?

GJ: I went in with no real knowledge of the subject and a host of unexamined preconceptions. What I learned was how complex the whole question is—and how little most people care to think about what happens when we incarcerate human beings.

RP: Did the experience of being privy to the inside workings of prison life change any of your feelings about the system in place, or the nature of incarceration in general?

GJ: I went in with many of the clichés and preconceptions that you get from the movies. But KP wasn’t like that all, although I got the sense that there is a kind of low-grade civil war between inmates and officers. You get to realize how difficult the job is, boring, unpleasant, tense and with moments of danger, and I found some corrections officers who were quite remarkable. Others, less so. The culture on both sides seems to be ingrained. It was disconcerting to do the historical research, and figure out how long-standing and intractable these problems are. I went in with the kind of morbid curiosity that many people have about prisons. As with most projects I do, when I get to the end, I have enough knowledge to start again.

RP: Many interesting aspects of the KP are revealed in your project, but most interesting to me is the artworks made by prisoners that decorate almost every surface available to them. I am only familiar with the interior life of prisons through film and television, and never anticipated the extent to which inmates are given the freedom to express themselves in this way–especially in a maximum-security facility! On TV, the only marks that I’ve seen prisoners make are the tallies indicating time spent inside that are secretly scratched onto the wall. Did you meet any of the prisoner-artists responsible for the work depicted in your photographs, or glean any knowledge as to whether this behaviour is permitted, encouraged or regulated?

GJ: I was lucky in that I was able to photograph a lot of the cells the day they were vacated—they were kind of like a corpse where the facial hairs are still growing. They were the most tiring photographic days of my life, but I was happy to have captured all these tragic messages and drawings and murals, which were something of a surprise. I think it gives a voice to the inmates and gives us some intimation of the claustrophobia of the spaces.

I was particularly struck by a lot of the work by Native inmates, where some of the drawing is remarkably accomplished. And they didn’t go to art school. I think one of the most rewarding moments was when I was able to photograph the Change of Seasons ceremonies of the Aboriginal inmates in their own space in one of the compounds. This is when they have a day when they can cook elk stew and arctic char and bannock—I even had cedar tea—and there is the spiritual leadership of the elders, something that I think many of them never had outside. I was able to have some interesting exchanges.

My great regret was that I was out of the country when eight or so inmates had their graduation ceremony. They get to choose either cake or doughnuts, and wear their gowns and mortarboards, and there was even a valedictorian.