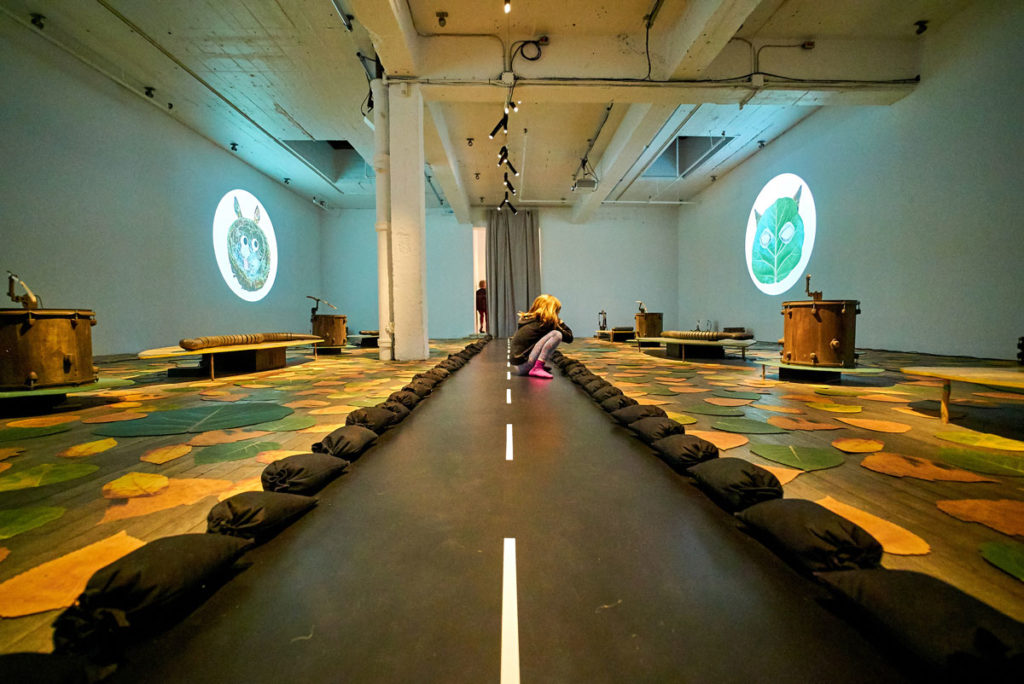 Rita McKeough’s immersive installation “Veins,” currently on view at Oboro in Montreal, is experienced via a central L-shaped road, a pre-ordained trajectory that is artificially smooth underfoot and hemmed in at both sides by small sandbags. Like walking into a supernatural toyshop at night, a flurry of rhythmic activity begins when you enter. Tree trunk drums fitted with twig-like drumsticks that beat out a staggered rhythm are set against an underlying soundtrack of urgent drumming, layered whispers, high-pitched humming, bird calls, growls, barks and the odd decipherable chant—“slow, slow, slow.” Added to this soundscape is the mechanical clacking of a miniature train making its Sisyphean journey between two piles of tinder, and the rattle of articulated snakes writhing on oversized leaf platforms—leaves that mirror the green and golden-veined aspen leaves blanketing the floor. On the walls, four projections of hybrid creatures—a leaf-owl, tree-stump elk, wolf-bear and nest with googly eyes—preside over the space, blinking judgmentally. Perhaps the only silent bodies in the room are the miniature pump jacks, dutifully bobbing.

In a recent interview, McKeough talks about the search for a rhythm that might palpably communicate urgency. Set against the more playful aspects of the exhibition (experiments with scale, craft-inspired collage), the show’s percussive heartbeat offers a dose of intensity. The drumming acts as an interspecies assertion, a direct message from wildlife to stay in our lane. Combined with the pump jacks and arterial theme, it also draws attention to the steadfastness of anti-pipeline movements, which are only gaining strength and hammering into public consciousness.

“Veins” is unambiguous about its environmental concerns. Although I am skeptical about art’s ability to affect measurable change—in this case stemming the flow of oil—McKeough’s persistent, ominous drumming does work toward conveying a nonverbal state of crisis. The show coincides with a moment of public upheaval over Kinder Morgan’s plans to expand the Trans Mountain pipeline project in British Columbia—a proposal that infringes on Indigenous land rights, endangers wildlife, compromises water quality, and leaves surrounding communities and ecosystems vulnerable to the possibility of oil spills.

While the cynic in me questions the exhibition essay’s promise that “Veins” will create a space for crucial political conversations, I admit McKeough has engineered a resonant call to action. By calling forth the perspective of the land and its animal inhabitants under siege the artist conjures a distinct compassion in her audience—a necessary first step to engendering environmental justice. 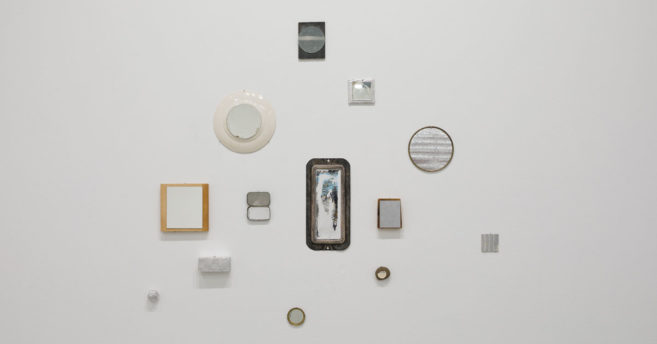 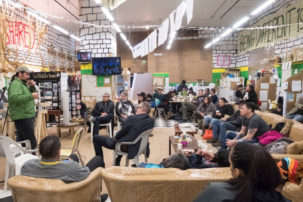