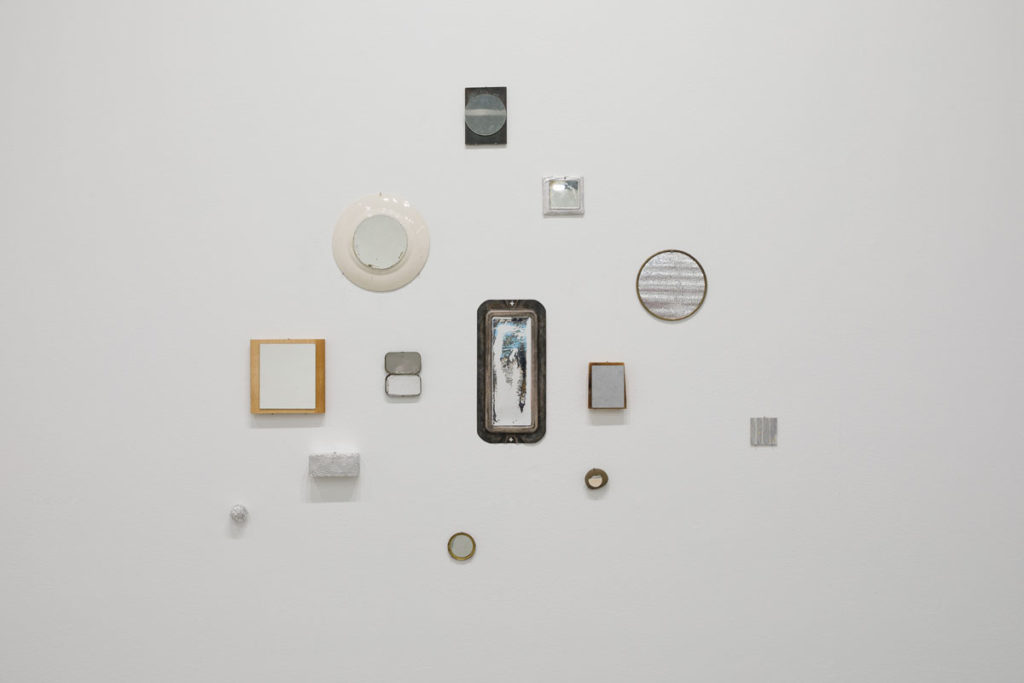 Works by Maggie Groat, Joar Nango and Leya Tess. Installation view, “We Built a House Out of the Things We Had Gathered” at Or Gallery, Vancouver. Photo: Dennis Ha.

“We Built a House Out of the Things We Had Gathered” at Or Gallery locates us somewhere between paradise and desolation. Curated by Laurie White, the exhibition features artists Maggie Groat, Joar Nango and Leya Tess, whose skillful engineering holds together invention and necessity in tenuous circumstances.

The exhibition presents an ecological framework, smartly subtending critiques of capital and colonial politics from the ground up. Joar Nango’s European Everything (2017) is a narrated video that traces the artist’s journey with a few companions from the Arctic tundra to the Mediterranean Sea. The travelogue recounts the 5,000 km expedition in reverse, but our viewpoint remains fixed in scrapyards, stuffed with the results of overproduction. Drone-like vistas of filing cabinets, couches and polystyrene unfold while the narrative places us elsewhere. In stark difference, we hear the careful assessments of the travelers as they pitch and strike camps, pensively evaluating what they have, what to gather and what to leave behind.

While Nango contemplates nomadic architectures, Leya Tess’s drawings bring language and legend to the surface through alterations of found Canadian Hydrographic Service maps. Inky tendrils coil around the writing on the maps, indiscriminately crossing over land masses and Pacific waterways to encircle text such as “DISCOVERY” and “CALM,” or “SWANSON” and “JOHN.” In They took all the agates away from Agate Beach (2018), motley glyphs ingest colonial place names and words to alter our cartographic interpretation of coastal ecology.

As ecological inevitabilities appear bleakly concretized, the artists’ works offer a welcoming space to temporarily inhabit. Maggie Groat’s Moonlight Reflectors or a Proposal for Returning Moonlight Back to the Moon (2011-ongoing) is an arrangement of antique mirrors, balled foil and silvery lozenge tins said to store energy absorbed from the full moon. The warbled reflections offer glimpses of elbows, noses and ears. Bodies appear in non-contiguous relations in which flesh can be considered within more expansive, celestial constellations.

The improvised solutions and piecemeal strategies of the artworks collected for this exhibition are not subordinate to the blueprints of some master plan for achieving environmental justice: they are legitimate and meaningful tools to help us construct more accommodating and sustainable relations, and allow us to shoulder the burden of care while creating support structures with the other-than-human world that surrounds us.

Caitlin Chaisson is an interdisciplinary artist, writer and curator based in Vancouver. She is the founder of Far Afield, an artist-led initiative that supports rural and regionally-connected artistic and curatorial practices.