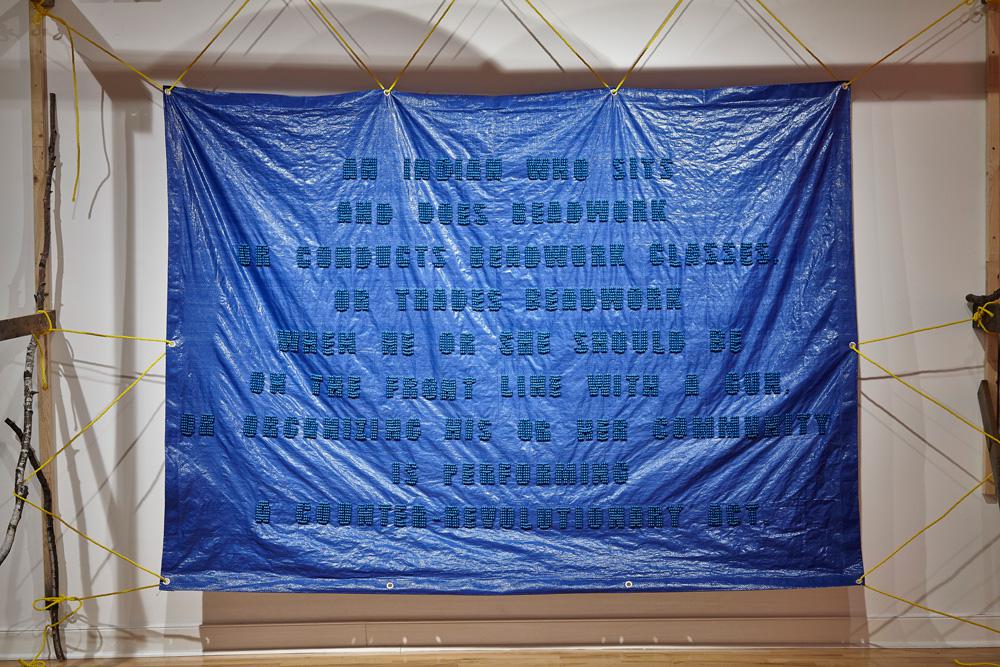 I was reminded of the game Rock, Paper, Scissors while touring through Audain Gallery’s “Geometry of Knowing, Part 2” group exhibition at Simon Fraser University last spring. Included in the exhibition was Brian Jungen’s Fore Revolver Reverse (2011), where the artist covered the seat portion of an Eames shell side chair with elk hide, while in the video Smashing (2004), Jimmie Durham attempted to crush objects brought to him by residency participants with a rock. Although scissors were not among Durham’s smashed objects, they were evoked through their affiliates and, once conjured, were felt at the trimmed edges of Josef Albers’s prints, Dawn Johnston’s photograph and Brent Wadden’s weavings.

Rock, Paper, Scissors was again on my mind at the opening of the Kamloops Art Gallery’s “Custom Made/Tsitslem te stem te ck’ultens-kuc” last month. Curated by the KAG’s former Aboriginal curator-in-residence, Tania Willard, this group exhibition differed from Willard’s earlier “Beat Nation” extravaganza in its emphasis on skill-based methods of assembly (beadwork, basketry, carving and quilting); organic and manufactured materials; and how the resultant artworks “embody concepts of cultural knowledge(s), sustainability, global production and politics in experimental forms.” Of these methods, materials and manifestations, the most recurrent is the wrapper.

In the context of the gallery, Rebecca Belmore’s magnificent Ayumee-aawach Oomama-mowan: Speaking to Their Mother (1991) is less a megaphone (at one time situated on the steps of Parliament Hill) than a horn of plenty; not strictly a wrapper in the way paper covers rock, and thus trumps it, but its opposite: a creation medium, itself a mother, and an encouraging start to an exhibition that has wrapping operating dialectically, generatively.

Less overt instances of wrapping are found in works by Brian Jungen, Jeneen Frei Njootli and Amy Malbeuf.

For The Men of My Family (2010), Jungen took circles (another recurrent motif in the exhibition) cut from elk hide and both strung and stretched them over a metal form, which he then placed atop a plinth-like freezer where meat from a kill is stored. To characterize this work as a representation of the tensions that both divide and combine families would be an understatement.

In a more playful vein, Frei Njootli’s I couldn’t start that skidoo but I made this (2015) takes a familiar roadside attention-getting device—the inflatable nylon dancing figure—and, through its alternating pulses, reminds us that with every breath held, with every tension carried, there is the potential for its release.

At a more political level, Malbeuf beaded a 1974 quote attributed to Durham onto a stretched blue tarpaulin. In what could be construed as a monochromatic critique (and poeticization) of Durham’s statement (“AN INDIAN WHO SITS / AND DOES BEADWORK, / OR CONDUCTS BEADWORK CLASSES, / OR TRADES BEADWORK / WHEN HE OR SHE SHOULD BE / ON THE FRONT LINE WITH A GUN, / OR ORGANIZING HIS OR HER COMMUNITY / IS PERFORMING / A COUNTER-REVOLUTIONARY ACT.”), Malbeuf opens the door further to a critical conversation among First Nations artists on the topic of First Nations art (and gender), while at the same time leaving a door open to questions concerning historical context and the tensions that might account for the extremity of Durham’s position.

In what is arguably the exhibition’s ultimate instance of wrapping, Ursula Johnson provided an opening-day performance where she wove herself inside a basket form, only to break from it in advance of the evening’s songs and speeches. That Johnson emerged from her self-imposed imprisonment without the use of scissors did not occur to me at the time. Nor did I find myself missing them.