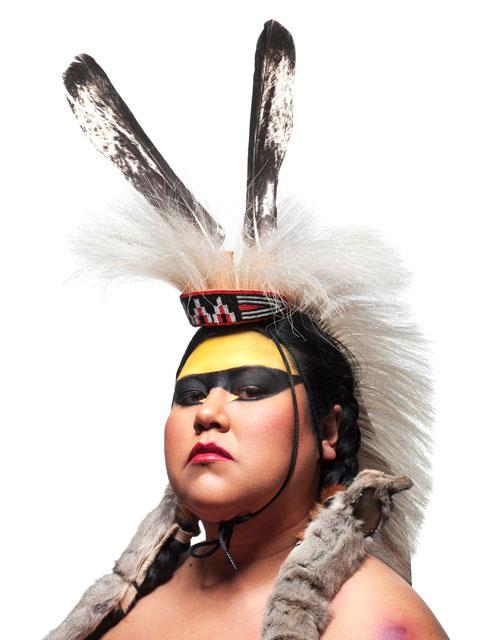 During its recent run at the Power Plant in Toronto, the exhibition “Beat Nation: Art, Hip Hop and Aboriginal Culture” won national and international coverage. But that large exhibition came from humble beginnings—namely, an online-only project co-curated by Tania Willard as part of a Canada Council Aboriginal Curator residency at Vancouver artist-run centre Grunt Gallery in 2009. Now, Willard has taken on a new CCAC residency at the Kamloops Art Gallery, which opens “Beat Nation” on June 29. In this interview, Willard talks about the origins of that unexpected blockbuster, the possible one she’s working on next, and the need to expand art thinking beyond the white cube.

Leah Sandals: “Beat Nation” is opening at the Kamloops Art Gallery this week. So far, it has had rave reviews at the Vancouver Art Gallery and the Power Plant, and received international blog coverage. How does that compare to your original intentions for the show?

Tania Willard: When it started at Grunt Gallery, it was with a very artist-run-centre approach—very immediate and somewhat more flexible and never really intended to be what it is today.

We never thought it would be a large touring show. But it’s been amazing to see the response—it’s a pleasure to see the work take off and see people respond to these artists.

LS: How did “Beat Nation” begin and develop?

TW: Beatnation.org was the original project, suggested by Glenn Atleen at Grunt in 2008. We had been working together previously at Redwire, which generated newspapers and other media about aboriginal arts and culture. Through Redwire, we were working with youth and could see hip hop’s influence through what we were doing.

So Glenn asked me and Skeena Reece to bring together something on hip hop as aboriginal culture for the sole purpose of an online gallery.

Then, there was an interest to bring some of the work to Saw Gallery in Ottawa as part of BC Scene. And then, when we launched the site, we did a small exhibition at Grunt, and there was a great response.

A while later, Kathleen Ritter, who had helped curate a music program related to “Beat Nation” at the VAG, said, “We think the ideas are really current and really strong—do you want to expand to the second floor of the Vancouver Art Gallery?”

And I thought we would just do that. Then a tour was planned out of the VAG exhibition. There is a trade-off with a tour in terms of my closeness to the project, but there is now a huge logistical component, so I’m glad to be removed slightly.

Overall, I wanted to do a show that played with ideas of traditional and contemporary, and that showed how tradition and heritage inform artists’ works in a contemporary context. And I’m still interested in that.

LS: When I visited the show in Toronto, a friend asked me a question I didn’t feel qualified to answer, so I’m going to ask you: What connects aboriginal communities connected to hip hop?

TW: You know, I think there is a long history there. I am 36 now; when I was 16, I was working selling fruit for my auntie at a powwow and I remember seeing a group of kids doing breakdancing come through the powwow. That was probably my first exposure to those ideas of what crossovers there could be between what we consider traditional and what we consider contemporary. And that was 20 years ago.

Much of the overlap has come from the conscious hip hop coming out of marginalized black inner-city communities. Native youth were identifying with those politics, and that’s where lots of those connections developed. When we were putting together the online gallery, hip hop definitely came across as a way people were expressing themselves and passing ideas and politics on to others in their communities.

LS: “Beat Nation” came out of your Canada Council Aboriginal Curator residency at Grunt. What do you have planned for your CCAC residency at the KAG?

TW: One thing I’m looking forward to is working alongside some great staff. I think curator Charo Neville has done some great and innovative exhibitions there already.

Another thing I want to do is to work with collections at the KAG. It has a really great collection of printmaking-based work by contemporary aboriginal artists, and I’m interested in pulling together a show out of that.

I would also like to organize a larger exhibition that will revolve around contemporary artists working with what people traditionally have thought of as “native art”—“skill-based work” like basketry and beading. It’s the kind of work people might think of as being connected with the historical native community, but there are ways contemporary artists are turning that on its head; they’re turning around the idea of craft in an ethnographic context.

LS: Interesting. What artists, for example, do you see working in this vein?

TW: One example would be Christi Belcourt. She is an Anishinaabe artist who works in beadwork. For one of her projects, she decided she wanted to bead a moccasin vamp for all the murdered and missing aboriginal women across Canada. Groups of aboriginal and non-aboriginal women came together to help her. She has something like 700 pairs of moccasins now and has created a large-scale project out of that that is touring.

Another artist, Dana Claxton, has a work called Rattle that plays with the idea of taking beadwork, which is often seen in a craft context, and blowing it up to this large installation. She’s talked about wanting to bring this beautiful form and aesthetic into the gallery in a way that contemporary art gallery audiences can perhaps more easily recognize.

So it’s all about this flip—taking some really beautiful work that is really well crafted, and playing with ideas around that and stretching that out. That show should happen in 2015 at the KAG.

LS: There seems to be a real moment happening right now around aboriginal art in Canada given “Beat Nation”’s success and the opening of “Sakahàn” at the National Gallery. How would you characterize the work that has been accomplished and the work that needs to be done next?

TW: I wrote about an artist’s work recently, and I talked about how in a previous generation it was still really about opening up spaces—so having galleries to show work at, having curators of aboriginal backgrounds to interpret ideas in the work.

And you can see that in terms of the National Gallery exhibition, some of that has taken hold. I think some of that is happening, so I would hope that it continues happening.

I think we will start to see more crossover in terms of contemporary art, so that indigenous artists don’t get pigeonholed into doing a certain kind of work, or only showing with other native artists. Definitely we need to see those artists cross over and do more international stuff, as well as more solo shows. The large group shows are great, but it’s important to have major solo shows too.

LS: Is there anything else you would like to add about your work coming up at the KAG?

TW: I’m really thankful to the Canada Council and the KAG for supporting the whole idea, and I’m just so pleased to be able to work a bit closer to home. I now live in Neskonlith reserve close to Kamloops and close to where I grew up. To be able to work and live here and bring more art and ideas here is just so great. I have two young kids and they go to a Secwepemctsin immersion school, so living here just gets me so much closer to culture and origins, and being able to pass that on to my children.

Lately, I’ve been helping with community arts projects in the area—we will have a billboard with a mural painted on it visible from the Trans-Canada, and another project about the order of the salmon. I think art needs to be expanded and be not just in galleries, but in smaller, rural communities and on-reserve. I am not sure if there even is an art gallery in the sense of a public, purpose-built type thing on any reserve community in Canada—and that is a bit surprising, I think.