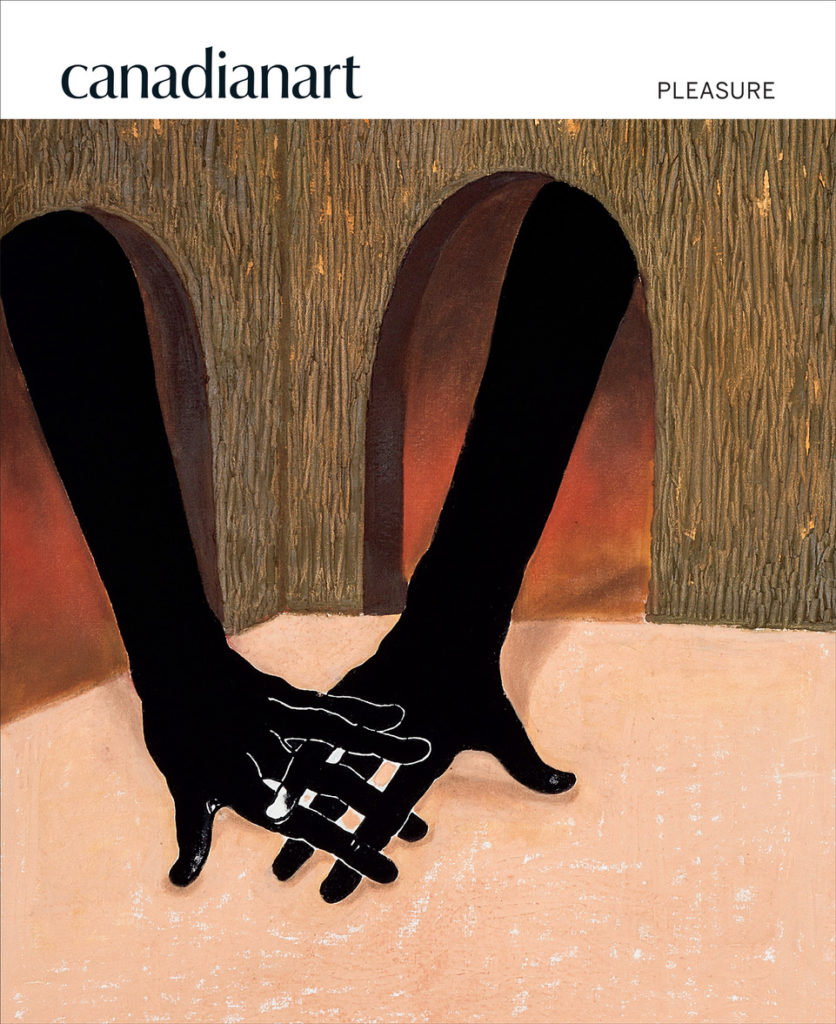 When we asked painter and writer Margaux Williamson to suggest an image pairing for her Keynote text on this issue’s theme of pleasure (“This Work around Me,” page 41), she emailed us more than 30 images, most of them culled from the archiving she had done as image researcher for the literary magazine n+1. These emails began to function for me as weird, graphic subtext for our editorial focus. There was so much to choose from, so many different visual iterations of pleasure—so many artworks that seemed so peculiar, so individual, that we struggled to see what they even had to do with pleasure. One of Williamson’s emails had an embedded JPEG captioned “too bad this one is too on the money,” and attributed to “anonymous canadian”; it appeared to be a painting in a cheap silver frame, a naive depiction of a shipwreck, with a figure of a woman clinging desperately to a stone cross, dragging herself out of a roiling sea that has visibly claimed the lives of all of her shipmates, one of whom reaches pathetically out of the water as if to wave goodbye to the viewer before dying. “I got it at [gallerist] Katharine Mulherin’s brief vintage shop,” Williamson told me over text. “I think she found it at a flea market or garage sale, probably near Crystal Beach. It is my favourite.”

It is a given that pleasure is subjective. Indeed, we faced bigger challenges when compiling this issue: how to speak of pleasure in a time when contemporary conversations tend to focus on how fundamentally complicated it is? Is to write about pleasure to make it instantly not pleasurable? Admittedly, you will not find much unqualified pleasure here, but rather defiant assertions of pleasure after (important) qualifications have been made. In Aruna D’Souza’s “A Feminist Diary” (page 58), she recounts her formative experiences with feminist theory and its suspicions of pleasure: “not a terrible lesson to learn,” she writes, “given how many people in the world seem to derive their greatest enjoyment from the unhappiness of others.” Later in the piece, she explains the lesson’s maturation, for her: to claim and assert pleasure—to take ownership of it, to share it—can be as radically political as outright critique. Paraphrasing artist Howardena Pindell, D’Souza writes, “aesthetic pleasure [is] important now, not just for its own sake, but to revive us, to give us the wherewithal to fight another day.”—David Balzer, Editor-in-Chief and Co-Publisher

So much feminist thinking tells us to be wary of visual pleasure. But for some artists, taking pleasure in the painted surface is as political as it is recuperative

How we encounter art is far more complex than neuroscientists suggest

I Do See Myself

Why the figures in Oreka James’s paintings protect their privacy

When I stopped making clothes, I started exploring textiles in a different way

The Natural History of the World

When Laura Aguilar died in early 2018, she left behind a series of photographic and video works that depict the pleasures and discomforts of her own body

For Love or Money

According to Canada Revenue, an artist is either a professional or a hobbyist—which raises broader questions about how art should be valued

10 Artists Who Use Pleasure to Defy and Subvert

Body alteration, boyfriend tees, and beaded cushions are some of the mediums they work with

This Work Around Me

In 1970s Vancouver, Kate Craig imagined writing an avant-garde sex scene for a video that would never come to be

On the occasion of her first career-survey exhibition, Dana Claxton discusses politics and pleasure with Skeena Reece

For our Winter 2019 issue themed on Pleasure, we asked seven artists: which works of art turn you on?

This year’s Canadian Art School Guide focuses on programs training conservators, curators, museum educators and other professionals who make the work of so many artists possible. To download a PDF of the entire print-version supplement, click here.