I Do See Myself

Why the figures in Oreka James’s paintings protect their privacy 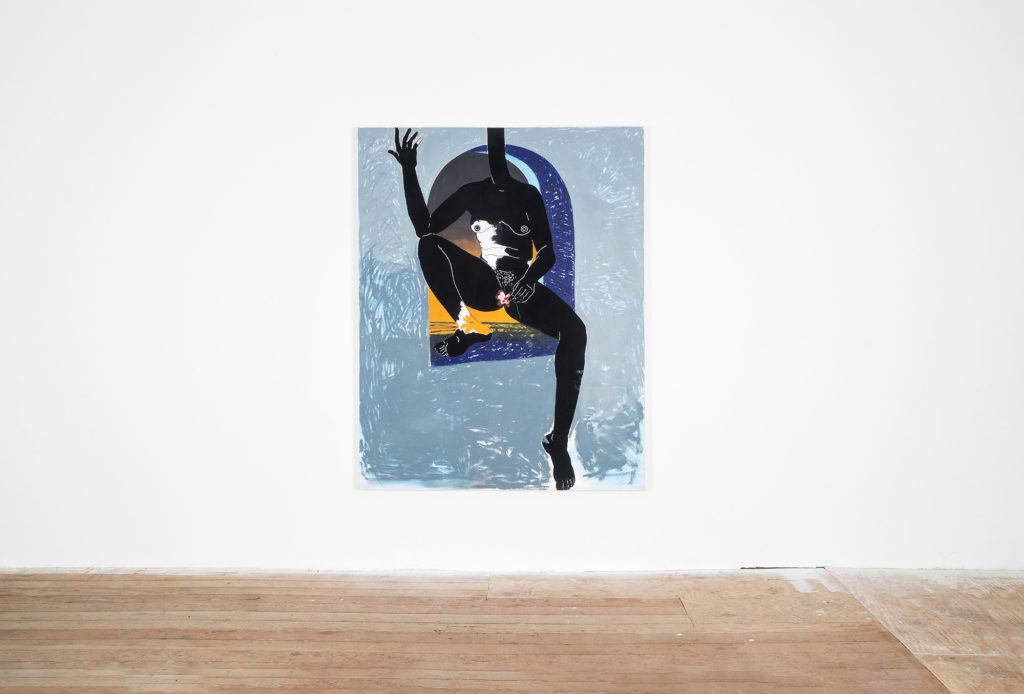 A fingertip, a left ankle, an entire right hand and a breast are all missing colour. Toronto artist Oreka James’s paintings often depict her black figures as washed out or rubbed down with splotches of white paint. Or, is it that the baseline whiteness—of the canvas, of the art industry, of Canadian institutions—is filled in mostly, but not completely, by black paint? Either way, something is off.

This dichotomous thinking is the most banal way to conceptualize this recurring motif in James’s work. Admittedly, it’s also my first way in: through the lens of the 1990s Hollywood-adjacent term “whitewashing,” the process of painting over Black performers, artists and intellectuals with whiteness to deaden their experiences, while at the same time mining those experiences for trauma porn. But these paintings are so much more than cultural schemas. Instead, James describes the motif (showcased, for instance, in her 2017 painting Softly, dusk whispered into my ear, AWAKEN), which started off in undergrad, as a way to visually wrestle with dissociation, the experience of disconnection from reality. “It reminded me of the figure being present but also not being present at the same time,” she tells me over the phone. “It’s something that’s intuitive, that I can’t really explain, but if I had to explain it, I would say it’s mirroring a psychological aspect of being Black in this world.”

Once I digest this relationship between dissociation and James’s work, it becomes impossible to unsee it. Her figures are always headless or out-ofbodied; in an untitled 2017 piece, the figure consists of hands and forearms poking through arched openings, for example. In Tongo Eisen-Martin’s Heaven Is All Goodbyes, which won a 2018 American Book Award, a poem called “Snuck Between Pews Too” reminds me of James’s attempt to grip onto detachment: “You ever sat on the couch while your body was at the window, hands and forehead pressed against the glass? And wondered what that feeling in your chest had to do with the groceries.”

At stake is how the anxious beauty of Black art undermines the sanctity of the self-assured individual, or, to put it plainly, how Black people invent moments of respite. That is to say, dissociation for James is not mere metaphor As a physical and emotional state of detachment from reality, dissociation is understood in mental health communities as a way—and sometimes the only available way—to cope with trauma. James does not want her work to go down easy for others because it does not always go down easy for her—hence the uneasy mix of surrealist environments, mismatched body parts and alfresco tones for interior settings. In my conversations with her, James asks clarification questions and revises theoretical concepts she had previously applied to her work. She speaks, slowly and thoughtfully, as though she is taking care with herself, like she is sewing a complicated cross-stitch pattern. Step by step, I learn, however, that she is building. 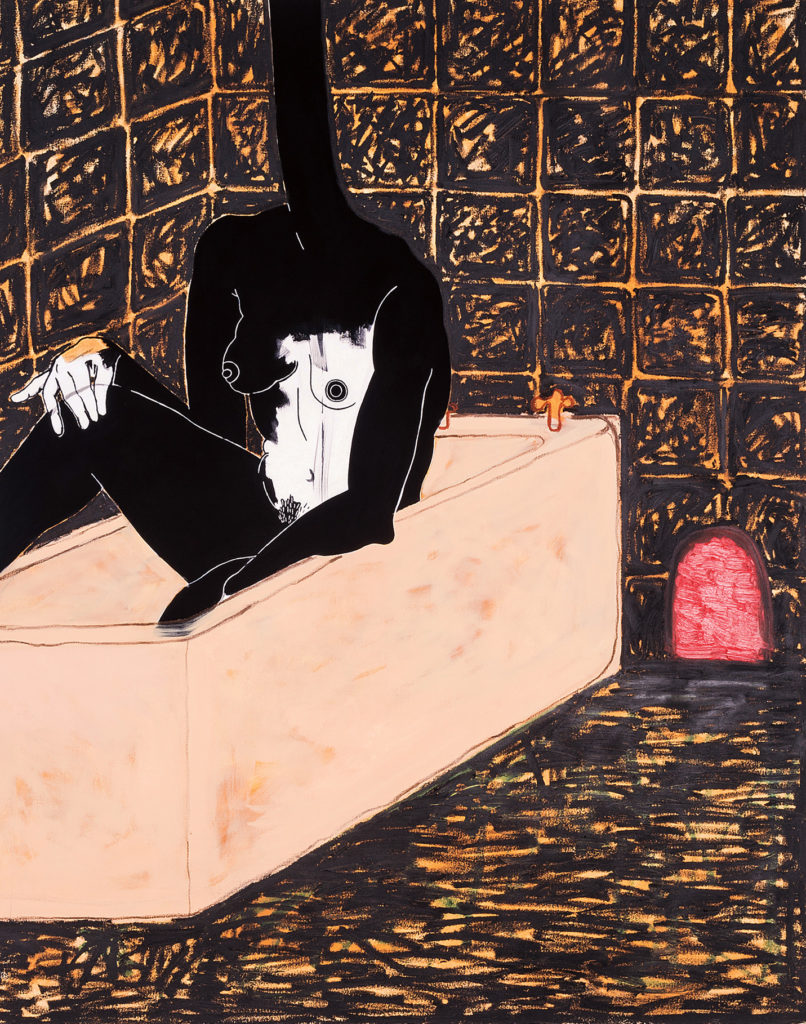 James has been painting “officially” since 2012. She is a member of the GTA-based Black Artists Union, also known as the BAU Collective, and a 2016 graduate of Toronto’s OCAD University, where she tells me she was the only Black person out of 72 students in her thesis year. “When I paint, it takes me so long to even get started,” she says. At her shared studio in Kensington Market, she moves her paintings to the common area because she needs everything to be a certain way while she is painting: for example, she works really early or really late to avoid the noise of the studio, and has to have eaten within an hour before beginning work. “There needs to be this grandeur of something in order for me to paint,” she says. “Everything has to be perfect—the feeling too.” Her artistic practice, which now also includes experiments with photography, sculpture and other mediums, started seriously with drawing before it did painting. “I took line work very seriously—proportion, accuracy and all those Westernized ways of making art. It used to take me hours to do an eyeball,” she says. “But when I started painting I found more freedom. I was learning to let loose.”

“I’m making my work strictly for Black people to enjoy or to understand. If they’re looking for happiness, they’ll find it.”

But even within the more generic questions about process, James is prudent not to depoliticize her everyday scenes. “Existing as a Black woman, I am always surrounded by that [context]. I subconsciously remind myself what I am creating…the deepness, the heaviness,” she says. I ask about how—given the history of the representation of Blackness in the aftermath of the transatlantic slave trade—the Black body in pain is often morphed into a pornographic image for white consumption. James responds: “The room I’m trying to create for pleasure is very limited for people who don’t understand. If you don’t understand the painting, you’re not going to contextualize, or understand, the joy, the love or the pain, or anything.” For James’s ideal audience, the world of interpretation is much more capacious: “I’m making my work strictly for Black people to enjoy or to understand. If they’re looking for happiness, they’ll find it.”

In February and March of 2018, the gallery ltd los angeles presented James’s first solo exhibition “If the other does not see me, I do see myself,” which featured two earlier paintings on stretched canvas alongside five new, unstretched paintings that hovered over the wall. The exhibition text centred the idea of “intentional objectification,” explaining that James “intentionally objectifies the bodies by removing their faces, thus concealing the identity.” I asked James if the concept is hers or the gallerist’s: “The intentional objectification comes from not wanting to disclose all of me, [to not] have my whole identity exposed. So it’s a way of keeping a certain gaze out: a male gaze, a Western gaze, an anti-Black gaze,” she tells me about the phrase, which she contributed to the organization of the exhibition. James’s approach circles around a delicate Black politics of practicing refusal by troubling the line between pleasure and pain, a problematic that takes shape in an untitled painting from 2016 of a headless woman naked in a bath, the setting overtaken by black tiles and punctuated by an unsettling red mouse hole toward the bottom corner of the image. What drove the Los Angeles exhibition was the initial discomfort James felt putting the show together. She went into the show, her first for a commercial gallery, already feeling “exploited and run down” by the art world, and in the wake of experimenting with how to be Black and do Black art in a white art industry that extracts pleasure from the spectacle of Black pain. “Objectification goes hand in hand with a form of pleasure,” she says. Her response to the thin line between enjoying and being enjoyed was to live with racism, to sit with it, but to turn it around strategically.