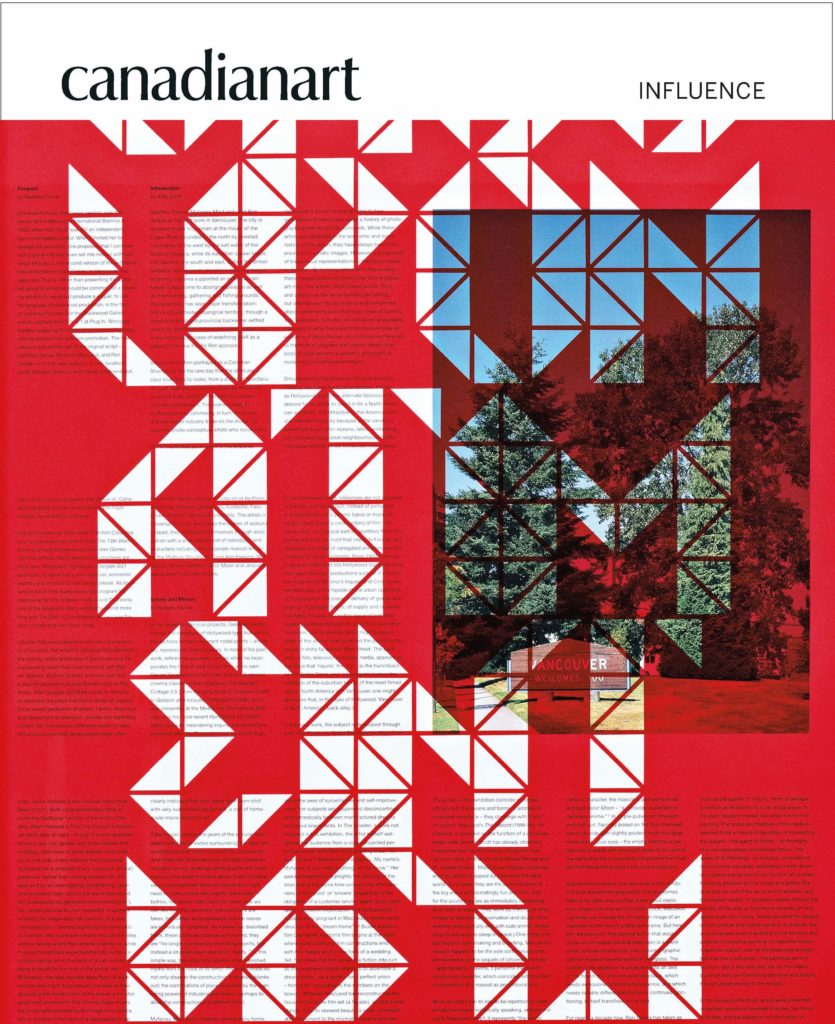 Last spring, Carrie Mae Weems gave a lecture-performance where she related, through language and song, the artists, musicians and writers who had inspired her. It was powerful to hear such an influential artist express her own influences, almost embodying the works that had stayed with her most. “Numerous are the possible structures of influence,” as Yaniya Lee writes in this issue’s Keynote. We can cite sources, name those who came before us, make clear references to the work we love, but influence isn’t always apparent. It’s often ephemeral, shifting in time with changing tastes. Ideas are repeated, tweaked, rediscovered—and the lines between influence and appropriation are thin.

Is it possible to name the force an artwork wields or the emotion a melody carries? Who has the power to determine what is good or beautiful or interesting? Who benefits from how market value can determine cultural and social values? Power is the strong undercurrent of the surfaces and structures of influence. Many artists in this issue address power relations through archival research, work that reminds us that history rarely operates in linear fashion. Influence is muddied, a process of mixing, a set of dialogues bouncing from one generation to the next, spilling over, slightly altered.

For Ron Terada, this issue’s cover artist, the headline culture of mainstream media offers ripe material for considering how power structures what we read, how we think and the ways we interact with each other. ONCE UPON A TIME IN THE WEST (2015) repurposes a 2001 exhibition poster that canonized his own work in the context of Vancouver’s art historical lineage, a wry comment on how drawing connections of influence, even seemingly minor ones, can define culture as much as the machinations of Hollywood do. The idea of the singular artist-genius may long be past, but the networks of influence that produce culture do repeat and are carried forward in subsequent generations.

by Justin Ducharme and Zachery Longboy

A Centenary of Influence

A recent exhibition revealed the early 20th-century social networks whose power shaped cultural production in Canada. But those networks are shifting

by Deanna Bowen and Maya Wilson-Sanchez

The Weight of Inheritance

In the spring of 2016, I was gifted a ton of Joyce Wieland’s marble, and with it a piece of her legacy

Aiyyana Maracle (1950–2016) was an artist, performer and storyteller who worked toward decolonizing gender and centring trans women. What are the politics of preserving her legacy?

ONCE UPON A TIME IN THE WEST

Thirty years ago, a landmark exhibition offered models of collective resistance and refuge for and by Black women

In mining the stuff of the world, two artists untangle beauty from consumption and attraction from complicity

by Sara Cwynar and Elizabeth Zvonar

The Disintegration of a Critic

“We don’t, now, have the 22nd century, an era of great promise, looming ahead of us. You never hear it mentioned; you scarcely ever see it in print.”