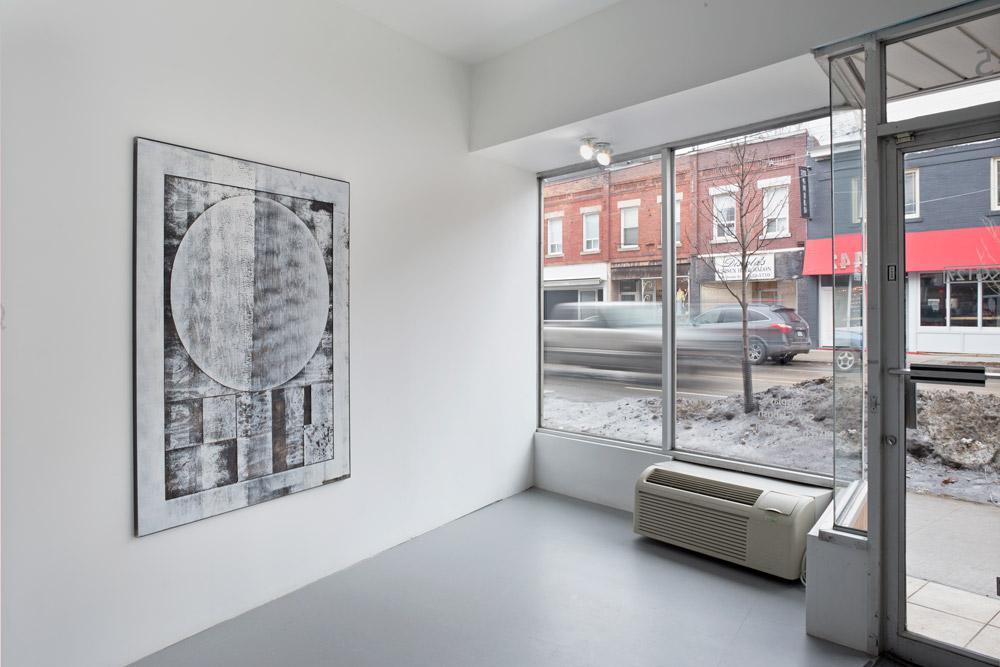 As Carl Jung frequently pointed out in his later career, symbols are concomitant with religion. The reason, of course, is in the very definition of symbol: a concrete thing that stands for something abstract. It is a form of visual transubstantiation. Word becomes flesh and flesh, interpreted through faith, becomes word again.

In this pairing, concept trumps matter, the latter a mere vehicle to transcendence. “Display,” London, Ontario–based artist Sky Glabush’s new exhibition at Toronto’s MKG127, interrogates this binary. His artist statement identifies the motivation of the show within its largest (and eponymous) piece, a beautiful, detailed graphite rendering of a Baha’i booth at the 1963 Canadian National Exhibition in Toronto. “I was moved by the difficulty this image evoked in trying to represent a system of belief,” Glabush writes, “and also by the impossibility of the task, by the failure of representation.”

The Baha’i faith, to which Glabush is connected through his father as well as his father-in-law, the painter and sculptor Otto Rogers, is indeed, as a relatively new religion, an imagistic mishmash. Embracing Judeo-Christian and Islamic beliefs as furthered by the teachings of 19th-century Persian prophet Baha’u’llah, Baha’i has a hybrid symbology. There is both a nine-pointed and a five-pointed star; temples look like Gothic, Islamic and Hindu architecture, many with Modernist or proto-Modernist flourishes.

Modernism, a fixation of Glabush’s, is key to “Display.” Modernism often endorsed forceful cultural cohesion and art for art’s sake, drawing attention to the thing rather than what it signifies, and thereby privileging a secularization of the image and a concrete, rather than illusionist, aesthetics. This is hardly cut-and-dried. Its most successful art-historical iteration might be Russian Suprematism, with its interest in new mathematics and philosophic rationalism. Yet Suprematism was allied with the emerging Soviet state (as well as, through Malevich, the mysticism of P.D. Ouspensky). In other Modernist avant-gardes, one finds even stronger ideologies, from the Italian Futurists and their fascism to the American Abstract Expressionists and their existentialism and, arguably, American libertarianism. In legendary formalist experimentation, one still so rarely finds the thing being just the thing. It is one of Modernism’s grand, inevitable failures.

“Display” begins with a work made of routered plywood, with a tease of a title, Moon. Is this, like Glabush’s previous series depicting midcentury houses in London, Ontario, a landscape? Is it a tribute to fellow Londoner Paterson Ewen’s iconic routered moons and suns? A desire to enter into illusionist space, to see the work’s large circle as a moon, is rebuffed by the grain of the plywood. The nonchalant application of white acrylic with a paint roller is another rebuff, an antidote, perhaps, to Ewen’s characteristically pretty use of colour. If Moon represents anything not present, it is the hand of the artist. Making is its only concept.

This is also true of learning to throw a pot, situated behind the gallery’s reception desk on a series of shelves, and consisting of unfired clay pots Glabush shaped as a novice potter in 2012. The artist’s dubiously successful attempts signify nothing but manipulation, striving. Glabush wants to make concrete the clumsy force of his own making.

Other works deal with the exceedingly Modernist concept of the grid, through screens, graph paper and collage. As critic Rosalind Krauss noted, the grid is meant to “declare the modernity of modern art…It is what art looks like when it turns its back on nature.” The grid wants full autonomy, even from the artist’s hand. This utopianism, of course, constitutes another Modernist failure.

Glabush does not seem interested in turning his back on nature, an act that, as typified by Mondrian, can be tied to mysticism. Glabush’s grids are messy, made of scavenged materials, roughly applied. Patterns and textures of his crookedly scored rectangles could suggest planar extension or spiritual openness, but they also just look like crooked rectangles. The pull is in their provenance as humble things. Two works employing a screen—Topography, which shows a screen’s imprint, and Screen, which uses an actual screen—are unstable, finite. Screen could be contrasted with Agnes Martin’s pristine grids; it is not white, but made of dark ink; its overlaid screen looks like the weathered, discarded mesh from a porch door.

Display, the titular graphite work, is a pointillist grid, made with the help of studio assistants. It rejects a personal, Romantic attachment to its Baha’i subject matter; it also quivers as a collective project, the awkward dots making the sans-serif Modernist font of the booth vulnerable and uncertain. It might be described as potluck photorealism.

One collage in “Display” is a page ripped from what looks to be a chapter in an art-history book entitled “From Classicism and Romanticism to Realism.” The page depicts a work by Richard Parkes Bonington, but the text is about J.M.W. Turner and John Constable; Glabush has named it Lorraine, after the landscape painter by which the three other artists are influenced. The page has been folded and, apparently, exposed to water so that its ink has bled. It has been applied to a panel with plaster. Given “Display”’s querying of symbolism, the work could be a denouncement of art history’s fixation with hermeneutics and trajectories. It is also strangely poetic. I thought of T.S. Eliot’s “These fragments I have shored against my ruins,” from The Waste Land. In its resemblance to a message pulled from a bottle, Lorraine refuses context. It is junk, but it is art; it is art, but it is junk. It gestures towards gesture. In its skepticism, it attains a compromised sort of freedom.