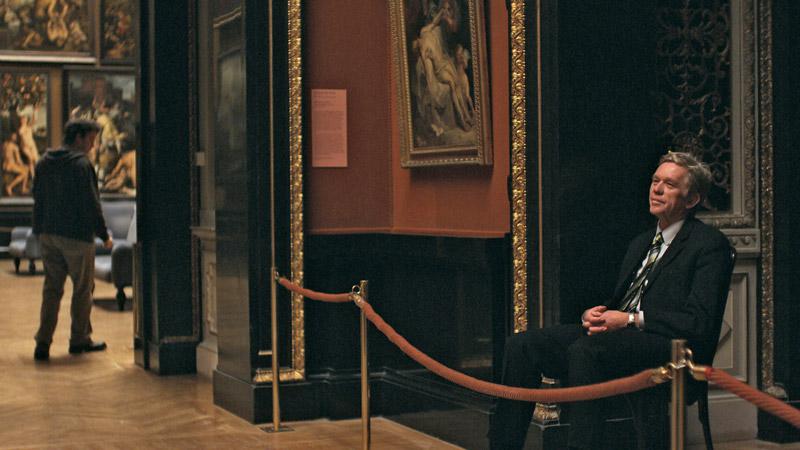 St. Stephen's Cathedral in Vienna as seen in Museum Hours

Another view of Johann (Bobby Sommer) at work in Museum Hours

A view of wintry Vienna from Museum Hours

Museum Hours, currently in limited release across North America, is no ordinary film. I want, first, to recommend it to art-history buffs—a dying breed that rarely gets to see its passions reflected onscreen. But the film’s scope, in contrast perhaps to its deliberately meditative, discursive and quiet tone, reaches much further. Like the institution it depicts, Museum Hours has enormous wisdom to impart if you take the time to see it.

Museum Hours is written and directed by Jem Cohen, a New York artist and filmmaker of remarkable perception. It is quite unlike anything he’s done before, its ambitions broader, its attitude eloquently mature. Still, no one but Cohen could have made the film. Two works of his come to mind as precedents. Chain from 2004 is, like Museum Hours, feature-length, depicting two characters from different worlds, here caught in an America whose rural life is being compromised by the proliferation of big-box stores. As in Museum Hours, there is a yearning for detail and character, a spiritual resistance to a contemporary ethos that by nature flattens out and erases. Another like-minded work is Building a Broken Mousetrap, a 2006 concert film about Dutch punk band the Ex. In my mind, it’s one of the best concert films ever made. Cohen’s camera meticulously registers the gestures of a band so in tune with rhythmic and melodic changes, they become a veritable machine.

Like Cohen’s characters and like Cohen himself, Museum Hours has the sensibility of a scavenger, casting about for beauty and wonder, acute as a scholar yet shrewd as an animal. This attitude is embodied in Museum Hours’s two main (and really, only) characters: Anne, played by Mary Margaret O’Hara, and Johann, played by Bobby Sommer. The story is simple. Anne leaves Montreal for Vienna because an estranged cousin is in a coma and no immediate family is alive or near to tend to her. Anne, listless and practically penniless, spends her time away from the hospital at one of the world’s great museums, the Kunsthistorisches Museum, and while there meets and befriends Johann, a guard, who is the film’s occasional narrator.

Johann is a toughened yet gentle complement to Anne’s bewildered, febrile, almost pre-verbal emotionalism. He is her dual guide, within the museum and without, translating doctors’ diagnoses for her. He draws us in too because, as a guard, he is in the museum but does not speak the rarefied language of the art expert. Like Cohen, he has a personal history as an anarchist punk kid: soon after they meet, Johann tells Anne he was involved in the Viennese rock scene for many years as a bodyguard and tour manager. Throughout his life, then, he has made it a job to be both insider and outsider.

All activity in the museum is seen through Johann’s eyes. Over Cohen’s stirring, moody shots of crowds and individuals, Johann’s voiced thoughts often drift to the experiences of the young—an effort, probably, to grapple with his profession and its attendant institution. Is he, an aging hipster, of any use anymore, or just another forgotten artifact? His meditations provide crucial entry points. In one scene, Johann muses about an intern whom he likes because they share the same taste in music. (The guy wears buttons from the bands he liked back in the day, which Johann finds charming but weird.) Still, the intern, university-educated to the hilt, petulantly disparages the works in the museum as bygone luxury items, obscene remnants of bourgeois over-consumption—“the rap-star videos of their day.” Their resting place in a by-admission building is, he tells Johann, a hallmark of “late capitalism.” Johann appreciates the insouciance, but offers his own: “How did people know it was late? And wouldn’t it be more troublesome if what existed now was early?”

And so it is that Museum Hours takes a relatively earnest view of creative history and of what survives of it in the present. Yet Cohen is always careful. Like the intern, he acknowledges how history can seem difficult, even plague-like, to the contemporary eye (perhaps especially, the contemporary European eye). It hangs everywhere, sometimes hideously irremovable, like the huge concrete flak towers from World War II  that Anne naively asks Johann about at one of the coffee houses they frequent. “They’ve been so massively built, it would be too expensive to destroy them,” he says, effectively explaining trauma. Tied to this is history’s delicate, recondite way of speaking. “They compete to be the most bored and to make fun of the art,” Johann says of the high-school students who visit the museum, curious analogues to the intern. Johann mentions the paintings’ sex and violence, which tend to hold the students’ attention and which, sometimes, shut them up.

But there is a reason why Anne comes to the museum, a foil to the hospital where her dying cousin lies, and of course there is a reason why Cohen does, too: somehow, the works come through. As Anne, Mary Margaret O’Hara is wonderfully naturalistic and sustained. She tells us a lot about the profundity of painting through her face. How to describe Cohen’s shots of her, neck craned and eyes sparkling, staring at images? The expressions suggest the religiosity and sensuality—in general, the enlivenment—that can come from a place we too often associate with a tomb. The film’s centrepiece (literally, for it is placed exactly in the middle of the film as a sort of entr’acte) is an art historian giving a talk in the museum’s famed Bruegel room. It, too, is seen through Johann’s eyes, as if this particular guide provides his most favourite, iconoclastic interpretations. The scene can be juxtaposed with Anne’s childlike looking: the guide begins by warning us that it might not always be apt simply to try to see ourselves in the works—that they can carry the obfuscating patina of history. Nonetheless, she says, they prompt communication. She ultimately picks a sort-of fight with a tour member who refuses to acknowledge that Bruegel has shifted focus, as was his wont, from the religious subject of his Conversion of Paul to, perhaps, a boy soldier, even a horse’s ass. Paintings can be lessons, she implies, but they still depend on radically personal things. Interpretation could be our only time machine, and it’s a mighty rickety one.

It’s also mighty powerful. In addition to the works at the Kunsthistorisches Museum, which Cohen records in gorgeous detail (putting Museum Hours in the slim ranks of the great cinematic depictions of paintings), are the numerous, moody views of contemporary wintry Vienna, rife with quotidian beauty in, for instance, its trashy Naschmarkt. Cohen’s is a delicate dance—because obviously, while watching a film so concerned with looking at art, we will inevitably begin to think about how we are looking at his art. The film is so successful, however, that one ends up not just sympathetically attuned to Cohen’s own “hallucinations of the real” (a phrase the tour guide tellingly uses for Bruegel), but ready to venture out into life—and indeed, into museums—with a newfound hunger, sensitivity and curiosity.