Douglas Coupland Doesn’t Care About You

The Vancouver artist and novelist's new touring survey promises an interactive experience that is deeply contemporary. But how social is the art, really? 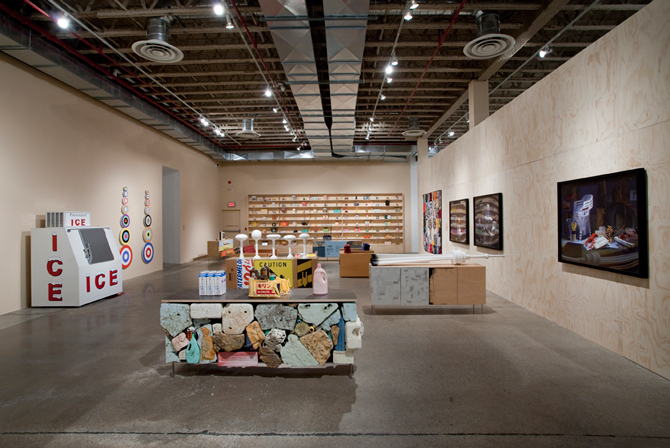 Douglas Coupland, "everywhere is anywhere is anything is everything" (installation view), 2014. Museum of Contemporary Canadian Art.

Douglas Coupland, "everywhere is anywhere is anything is everything" (installation view), 2014. Royal Ontario Museum.

Douglas Coupland, "everywhere is anywhere is anything is everything" (installation view), 2014. Royal Ontario Museum.

I remember writing a review of Douglas Coupland’s Hey Nostradamus! in which I lamented the author’s inability to be genuinely social. His characters related to technology and trends the way Jane Austen’s related to suitors—inquisitive, vexed, yearning. Otherwise there was only distance and irony. This was on purpose, of course, but by 2003 it had become stale. Coupland was older, 9/11 had happened and the invasion of Iraq was underway. Neoconservatism was ascendant, and writers and public intellectuals like Naomi Klein and Noam Chomsky were reviving activist culture. Hey Nostradamus! was about a high-school shooting yet read coldly, its topic seeming selected merely for zeitgeist. (Gus Van Sant’s film Elephant was released in 2003, Michael Moore’s Bowling for Columbine a year earlier.)

Coupland has little attachment to the past, his very sensibility repudiating notions of permanence. One work at his multi-venue survey currently on view in Toronto consists of his own novels chewed up, spit out and formed into wasps’ nests. In a 2014 article for the Financial Times, he wrote, “I think we’re going to look back on the 1990s as a golden age of sorts—a charmed bubble, optimism all around, great music, technology making life cooler by the day, and the pesky forces of history vaporised forever.” The tone is deliberately naïve, glib, current, exclusive. (Who indeed are “we” and where is “all around”?) It’s a ’90s attitude about the ’90s, a knowing shrug, a hipster frisson. In the next sentence, Coupland notes that Francis Fukuyama’s idea of the end of history, applicable to Coupland’s first novel Generation X, is now “phantasmagorically quaint.” And so Coupland’s primary, maybe sole, nostalgia: yearning for a time in which history, a fundamentally social phenomenon, was thought permanently over, trounced by bourgeois, academic, neoliberal theory.

It is thus tempting to imagine a moment in the early ’00s when a disgruntled Coupland, cleverly aware of the turning tide, sought, in the words of Little Edie Beale, the best costume for the day, and that this ended up being visual art. It didn’t happen this way. Coupland graduated from Emily Carr University of Art and Design with a major in sculpture in 1984, showing an installation at the Vancouver Art Gallery in 1987 and continuing to engage in art and design projects throughout the ’90s. His meteoric success as a writer may have distracted him from his true calling. In any case, novels seem the stuff of the ’90s for him, art the stuff of the millennium. It’s apposite that Coupland’s CV on his Toronto dealer’s website lists “Spike” as one of his first art solo art exhibitions, for it opened at New York’s Totem Gallery just days before 9/11.

Yet if Coupland is an (anti)social novelist, he is also an (anti)social artist. There are precedents for this in Pop art. Like Warhol and Koons (the former a declared influence) Coupland is interested in commercialism and kitsch and their relationships with mass engagement. Interestingly, Coupland’s survey—which debuted last year at the Vancouver Art Gallery and is entitled “everywhere is anywhere is anything is everything”—is concerned with what Warhol and Koons, by virtue of their respective ages, couldn’t be: the Internet. Coupland’s paintings from five or so years ago digitize famous Canadian landscapes; around the same time he painted QR codes in the style of Mondrian; more recently he has made a series of portraits recalling the Düsseldorf School in which faces are scrambled to defy facial-recognition software. He has created an installation of text works, Slogans for the Twenty-First Century, with sayings like “FOLLOW FRIEND FAVORITE” and “I MISS MY PRE-INTERNET BRAIN.” (He’s also really good at Twitter, and is currently doing a residency at the Google Institute in Paris at the same time that his survey has been included as part of the Google Art Project.)

Is Coupland among the first Post-Internet artists? Not really, because for him the Internet is not a fact of life, a way of thinking, but other, an anthropological curiosity, an import. (“I MISS MY PRE-INTERNET BRAIN” proclaims this, essentially applying only to those over 30.) Rather than digital culture, Coupland’s sensibility is contemporary art itself and its “art world,” to whose wares he remains intently if superficially committed, and whose language he speaks smartly and fluently. If Coupland repeats Koons’s and Warhol’s boyish, performative, cynical and amoral predilections he is also, like them, a designer and a curator as much as an artist. The presentational aspects of art are not his bane but his boon.

The contemporary curatorial mode fits Coupland well. He has recently befriended Hans Ulrich Obrist, an alliance that does not surprise me. Like Obrist and most star curators, Coupland is hyperproductive, always involved in multiple projects at once; his work is architectural, engaged with installation contexts and obsessed with the aesthetic dimensions of personal and public space; he is an archivist, amassing and cataloguing things like Japanese plastic bottles, Canadiana, hotel stationery, royalty-cheque envelopes and international versions of his own novels; and he is future-oriented, prone to grandiose but also demystifying prognostications, and committed, in a vaguely utopian way, to art’s capacity to question, even transform.

Also like a curator, Coupland is intently aware of how and why art is consumed. His work can be cringingly self-conscious in this respect, desiring to be looked at, to look good, to radiate awareness of being looked at and looking good. (It is, predictably, widely collected.) Coupland encourages public participation, even crowd-sourcing some of his work. At the Royal Ontario Museum, smartphones are part of the art, with certain works completed only when viewed through a screen. At Holt Renfrew down the street, Coupland exhibits Gumhead, a large sculpture of his head to which people are asked to stick gum. Gumball machines are provided adjacent to Gumhead, as well as Kleenex and Purell, presumably because of flu season and germs. The oozing, measles-like appearance of the head with gum is intentional, and in the context of a high-end fashion boutique, hilarious.

Coupland is having the majority of the fun, however. In the ROM’s didactics, movements in art and architecture are italicized with asterisks at their ends (I couldn’t find the definitions to which these asterisks seemed to refer). When a voluble didactic in the exhibition’s most self-indulgent section, The Brain, tells us that a structure is “built in a Brutalist Style*” and contains “scale models of influential 20th and 21st century buildings, as well as numerous corporate mascots painted white,” which “speak of structure and dreams, and the impact of modernism’s sensibility deep in the artist’s mind,” we are not actually learning about anything other than Coupland’s cultural-studies obsessions. Why would we want to? Encountering Coupland’s work can make one feel like a toddler dropped by a negligent mother into a pit of plastic balls at Chuck E. Cheese’s. This is “fun” fun, “funny” funny.

There are times when it is plainly in bad taste. Coupland’s 9/11 works are among the smartphone-activated ones: hold up your screen and see a couple (“the lovers”) or a single figure (“the poet”) falling to their deaths. There is also an Epcot Center–like maquette of the twin towers, an elegy for prelapsarian Modernism. The application of a cold-hearted slacker sensibility to the precise moment when it died might be tragically resonant, but I doubt this is the intention. Coupland seems confident that Pop’s provocative, imagistic detachment is the right approach when all successful 9/11 art proves him wrong: Eric Fischl’s sculptures of twisted bodies as they fell to the ground; Paul Chan’s masterful shadow projection of descending forms; Thomas Ruff’s large-format composite and digitized photographs of Ground Zero; and of course the vernacular art affixed to Lower Manhattan fences during late 2001, commemorating the lost and inquiring after the missing. In all this, there is classical haunting as well as emotional fragmentation.

The “Secret Handshake” section of the exhibition at MOCCA confirms that Coupland doesn’t play well with others. Instead of America, Pop subject extraordinaire, Coupland turns to Canada, contending it does indeed have kitsch, albeit of a subtler sort. (That it needs to have, or is even capable of having, kitsch at all is a central issue unaddressed here.) Several shelves show Canada-only products, such as Kokanee beer, Clik and Cheesies. A foam cast of Terry Fox’s leg reads like some monument but also, in the manner of the shelved products, like some readymade. Most national depictions of Fox are deadly serious. This one has been made with a giggle.

Elsewhere in this section one finds FLQ Hutch, a midcentury hutch with French Pepsi-sign drawers, two makeshift bombs and the funeral of Pierre Laporte flickering on a vintage television on top of it. Another hutch alludes to the Arctic (or rather its conquest?), a narwhal tusk affixed to it like an antenna-cum-hunting-trophy. Didactics inform us that textile works, containing embedded “dream catchers,” speak to the material traditions of First Nations and women artists. I doubt this. Coupland is less flaneur than entrepreneur, acquiring rather than inquiring; he wears the title of “artist” in the style of a “Hello My Name Is” name tag. Indeed, like the Gen X worker he so criticized and immortalized, Coupland’s detachment is privileged, effortful, performative and above all dark. He’s the comic-book-store guy, the record-store guy, the ’90s guy. Sure he’ll talk with you—but only if he absolutely has to.