Maggie Nelson's The Argonauts is the book of the year—a touchstone for 2015's cultural shifts, and an unconventional celebration of art criticism. 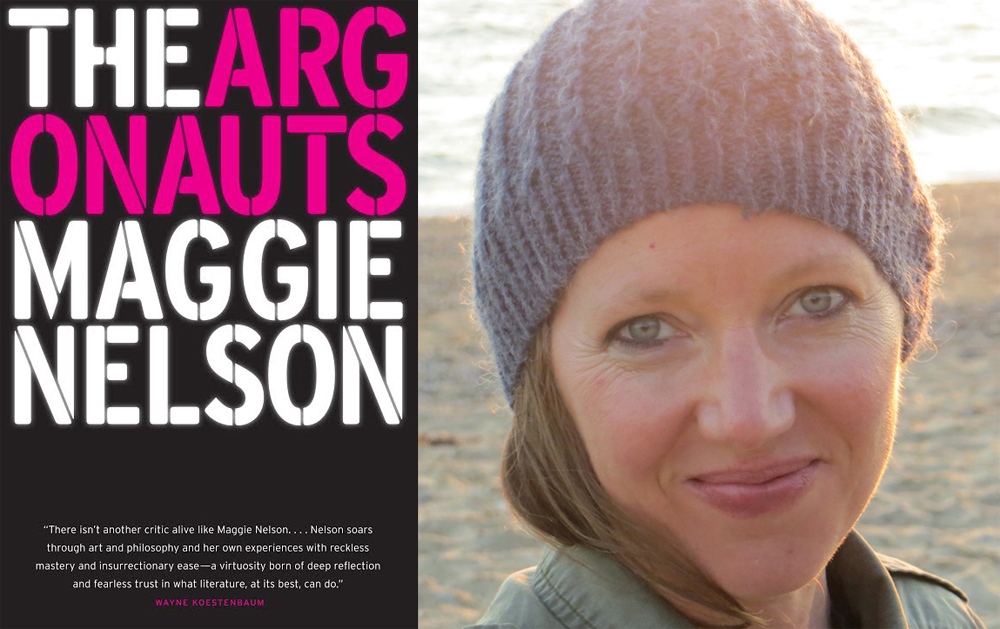 Cover of The Argonauts (left), and a photograph of Maggie Nelson by her partner Harry Dodge. Courtesy Graywolf Press.

This year I fell in love with Maggie Nelson. The California writer’s unapologetically eccentric and warm-hearted book The Argonauts has made a lot of best-of-2015 lists, though I also read two of her other books this year, Bluets and The Art of Cruelty, both equally resonant for me. Everyone I like who’s read The Argonauts likes it. It’s come to mark my tribe. It’s a book that changes you—not didactically but, like all good books, as an encounter, instructing through making a strong impression. It’s a book about love that you fall in love with.

The Argonauts is beguilingly short, at times resembling poetry. (Nelson is also a poet.) Yet it’s also difficult to describe, a long short book. I’ve seen many of its enthusiasts falter in their synopses to blurt out, “Just read it.” Its title conspicuously in tow, The Argonauts seems, to me, heroic, its very nature—brief, queer, challenging to summarize, neither fiction nor nonfiction—contrary to the publishing world’s marketing imperatives, yet still undeniably popular. As an emerging author newly discovering the fortysomething Nelson, I am struck by her example: build it (persistently, uncompromisingly) and they will (probably) come.

The Argonauts is about its author’s real-life partnership with transgender artist Harry Dodge, whose top surgery coincides with Nelson’s decision to carry a child. (Its inscription, “for Harry,” is, in the sweetest sense, comically redundant.) To describe its philosophy on love would necessitate quoting it over and over. (Seriously, just read it.) Informed by the radicalism of critical theory but never enslaved by its abstruse diction, The Argonauts revels in love’s nuances and paradoxes. It has as much in common with Plato’s Symposium, or Cordelia’s speech in King Lear, as it does with Barthes, from whom it draws its title.

Indeed, one can call The Argonauts both deeply conventional and unconventional. It is about where we end up after we’ve committed ourselves (rightly) to questioning and dismantling how humans should be to one another. Love’s concomitants—mourning, sex, family—persist after these efforts, however weirdly. The book’s last image is of Nelson and Dodge’s blended family dancing in their home to Janelle Monáe, one preceded by a gut punch: Nelson’s recollection of giving birth, interpolated by Dodge’s poignant recollection of his adoptive mother’s death. If The Argonauts is gender-queer, it’s gender-queer bourgeois. That’s a compliment. You’ll cry. You’ll want to call your parents after reading it. You’ll want to give it to your parents for Christmas.

The Argonauts makes a brilliant and unusual contribution to how we might understand art criticism as applicable to many things other than art-proper. Nelson begins by implicitly taking on the Jenny Holzer truism, “Words tend to be inadequate,” a view espoused by many conceptual artists, including Dodge, with whom she spars on the subject. “Words are good enough,” she writes. “It is idle to fault a net for having holes, my encyclopedia notes.” Any writer will smile at this.

Later, Nelson writes of a related opposite, an idea that abounds in critical theory: language is violent and hierarchical, asserting where assertion is frequently unnecessary. Again referring to Barthes, who contends that language’s assertions are impossible to completely destabilize through syntactic uncertainty, Nelson rebuts, “My writing is riddled with such tics of uncertainty. I have no excuse or solution, save to allow myself the tremblings, then go back in later and slash them out. In this way I edit myself into a boldness that is neither native nor foreign to me.”

Writing is thus a kind of cutting, a self-harm. It disempowers while empowering, and vice versa. The wonder expressed by the writer (the critic) is at times so inherently selfish as to make her vulnerable to everyone, everywhere (herself included). “Privilege saturates, privilege structures,” Nelson writes. “But I have also never been less interested in arguing for the rightness, much less the righteousness, of any particular position or orientation. What other reason is there for writing than to be traitor to one’s own reign, traitor to one’s own sex, to one’s class, to one’s majority? And to be a traitor to writing.”

A deeper lesson of The Argonauts is that the best critical writing undoes itself, as we all undo ourselves, through living. And it is through this delicate act of undoing that we can become generously self-enabled. The more one qualitatively asserts, the more one questions, this questioning becoming giving. In The Argonauts, Nelson, whose writing has always been characterized by voracious curiosity, moves through life like a (good) critic: everything looks like art to her, from her shits while she’s pregnant (“deformed into Christmas tree ornament–type balls”) to her partner’s body after surgery, rendered by her, through writing, into a beautiful, grotesque sculpture (“You emerged four hours later, hilariously zonked from the drugs, trying in vain to play the host while slipping in and out of consciousness, your whole torso more tightly bound than you’ve ever managed yourself, a drain hanging off each side, two pouches that filled up over and over again with blood stuff the color of cherry Kool-Aid.”) The Argonauts depicts many types of pregnancies, and births.

Ultimately, Nelson’s compassionate, yet coldly sharp, critical eye allows for a pulling in and out of subjectivities, her own and others’. In this way, she both appreciates and makes art—something we all do, something all humans have done, but in 2015, a year of noted discourse and mobilization around transgender identities and rights, something of which we have perhaps become more aware. An awakened contemporary self is informed by how the body and the mind, and thus desire, change—indeed can be authored, both by time (i.e. outside forces) and through will. To author is never to control fully. Passive observation, and surrender, must also characterize aesthetics, and life. “On the inside, we were two human animals undergoing transformations beside each other, bearing each other loose witness,” writes Nelson of her pregnancy and Dodge’s surgery, in one of The Argonauts’ most poignant passages. “In other words, we were aging.”

I end by listing, unranked, ten other things I liked in this particularly momentous year for culture—ones I think are philosophically aligned with The Argonauts.

“You Can Call Me F,” an exhibition by Anicka Yi at the Kitchen, New York

To Pimp a Butterfly, an album by Kendrick Lamar

Clouds of Sils Maria, a film by Olivier Assayas

NoNoseKnows, an installation by Mika Rottenberg at the 56th Venice Biennale

Trans, a book by Juliet Jacques

Summertime ’06, an album by Vince Staples

Art Angels, an album by Grimes

“Flux,” an exhibition by David Altmejd at the Musée d’art contemporain de Montréal