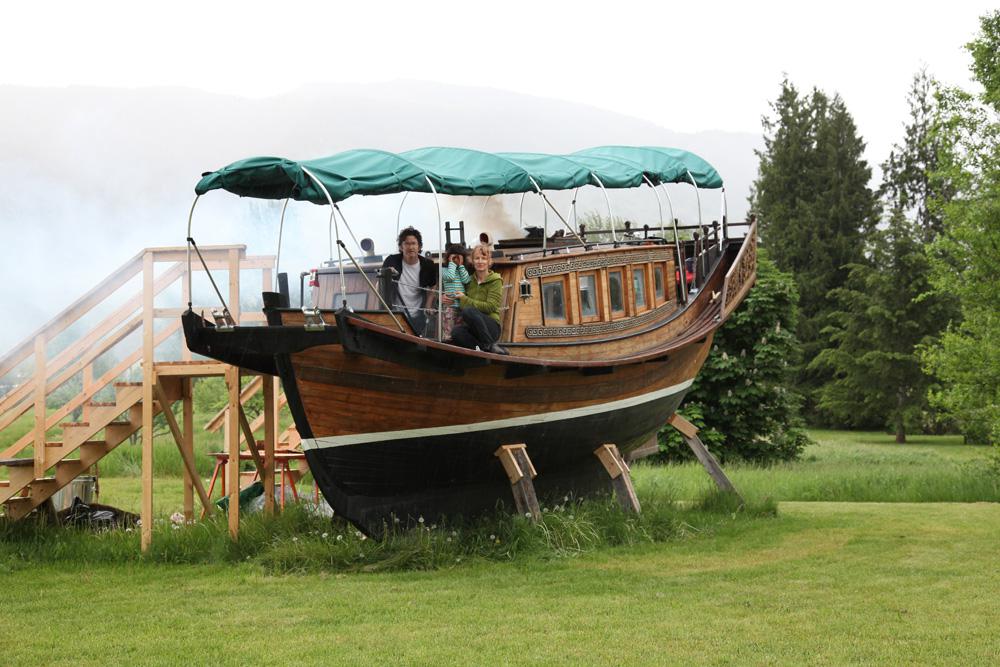 Janet Cardiff and George Bures Miller’s work is confounding and entertaining, fragmentary and wholly satisfying in equal measure. And it is designed this way. The duo’s intention lies almost exclusively in effect, with collaborative pieces like The Murder of Crows (2008), The Paradise Institute (2001) and all of Cardiff’s audio walking tours providing mere cues to narratives—narratives housed in culture, especially genre (such as the gothic)—which can only be finished subliminally, in viewers’ psyches. No successful Cardiff and Miller creation seems incomplete, however; instead it is a vortex, pulling the tangible world into a wild, seemingly endless rotation around powerful concepts and fantasies.

There is an actual vortex, a water funnel in a bottle, amid the many objects in Cardiff and Miller’s latest work, Ship O’ Fools, commissioned especially for Toronto’s Luminato festival. A 30-foot Chinese junk boat placed in Trinity Bellwoods Park near Queen Street West, the piece is, in the Cardiff and Miller tradition, a sculpture viewers are invited to enter and explore. In it, one finds, among other things, root-and-dirt-filled vitrines, dioramas of small, solitary men and women in spare rooms, vintage radios that coo and wail, and makeshift, automated percussive instruments, the sounds of which, for approximately five minutes, rise to a clattering crescendo. There is no missing the titular allegory, one recurrent throughout art history with perhaps its most famous depiction by Hieronymus Bosch. Indeed, Bosch’s painting, itself a fragment of a larger panel exploring (what else?) waste and truculence, provides the best exposition: immersed in a carnivalesque frenzy, the denizens of the boat do everything normal shipmates, with their chains-of-command and strict commercial and colonial courses, do not. They play music, eat cherries, tie a turkey to the mast and drink until they puke.

The difference, of course, is that Ship O’ Fools aims to enchant that which Bosch, despite his aesthetic fascination, condemns. The theme of waywardness is prolific: an upside-down can of chowder spins like a top on a rod linked to whirling gears; a robotic bow spasmodically crosses violin strings. Rube Goldberg, the American cartoonist and inventor known for his convoluted contraptions that perform simple tasks, must have been an influence, except the objects in Ship O’ Fools do nothing. (This is what distinguishes them from those in the artists’ very similar Dark Pool from 1995, a room that reacts to the presence of viewers.) Here, Cardiff and Miller have, as in the audio walks–where, like a confounding film noir, the end comes only to satisfy, not to elucidate–fetishized process. Now, if only they could build a perpetual-motion machine.