Brenda Draney: Thanks for the Memories

Less is more with Brenda Draney. Just as the power of words increases when they are used sparingly, the affect of images receives spartan emphasis in Draney’s pursuit of memory. Following Arabella Campbell and Jeremy Hof, two previous winners of the RBC Canadian Painting Competition, Draney, like her Vancouver-trained peers, demonstrates a sparse approach that focuses more on the idea of paint than its representational capabilities.

In Draney’s new exhibition, “Hold Still,” the Edmonton-based Emily Carr graduate cuts away even more from her fragmented memories, emphasizing absence—or paradoxically, the absence of presence—in her images. Fresh from a residency in Banff, Draney premiered her new work at Latitude 53, where she has boldly chosen to show merely six new paintings alongside two clusters of paper-based drawings and watercolours. With plenty of space in between each work, the presentation of the exhibition reflects how each piece demands more room in order to be realized.

Carrying forward the approach that characterized her award-winning RBC entry Aim Is Important, Draney conjures up a cast of crude characters, often half-formed, blurring out all other context with the vastness of a muted, blank canvas. In Hair Puller, it becomes clear that the isolation within each image is not a snapshot inspired by a literal visual reference; rather, it is a visible formation of the process of remembering. Rendering an uncertain figure of a torso slumped forward, with arms tensely holding onto something, and someone pulling the figure’s long hair, Draney composes a moment in the manner in which we remember—informed by what has not been represented, by what is not known. It’s akin to recounting a story where memories of blue jeans and red hair might stand out, but the colour of a shirt or the make of a shoe remains absent. Hair Puller most effectively displays how absence is able to conjure a stronger impression than presence; the apex of its composition centres on a clown-like figure with arms outstretched, one reaching toward the slumped figure and the other toward an upside-down pink t.

Sourced directly from the fluid realm of personal memory, the works engage more with the act of remembering than with the representation of narratives stored in memory. Forgoing the articulation of a beginning, middle or end, Draney successfully obliterates a linear narrative in favour of an open concept of how memory shifts and changes in non-sequential tangents. The works themselves are difficult to remember once one leaves the gallery, like recalling the details of dreams once one has started one’s day.

Playing with a variety of gesso-primed canvases that add a thin, fog-like layer, Draney’s new series explore sparse clouds of imagery on dark linen, delivering new depth. Though a variety of surfaces, sizes and papers might suggest to some an uncertainty in voice, there is undeniably a specific aesthetic here that hinges on ambiguity and vagueness.

Draney’s artworks are concerned with what is missing; they emphasize the bareness of how we do (and do not) remember. In this way, the scant remains that are visible become that much more powerful. There is no doubt that the artist’s marks are of human figures, marks imbued with sentiment and meaning. With a childlike palette of colours and a simple crudeness to her figures, Draney appears to be drawing on memories from all stages of her life—but their rendering is still one of childhood wonder.

Given that evocation of childhood memories, the exhibition title is reminiscent of being scolded, of being told to “hold still.” But as in all aspects of Draney’s work, there is also the space for open interpretation, for reflecting the inability of memories to stay still. As there is no possible way to differentiate what we knew from what we have come to know, the act of remembering is in fact an active gesture, one that continually morphs itself into existence through each breath and gesture.

Hollywood, Whiteness and the Illusion of Normalcy

Writer Amy Fung draws on the video work of Aleesa Cohene, a story about Alice Cooper and life in LA to reflect on race and visibility 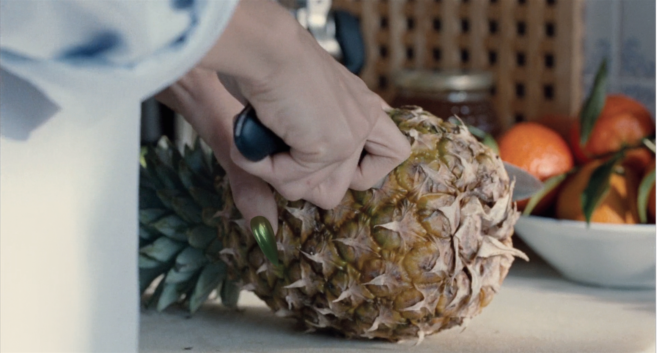