Hollywood, Whiteness and the Illusion of Normalcy

Writer Amy Fung draws on the video work of Aleesa Cohene, a story about Alice Cooper and life in LA to reflect on race and visibility 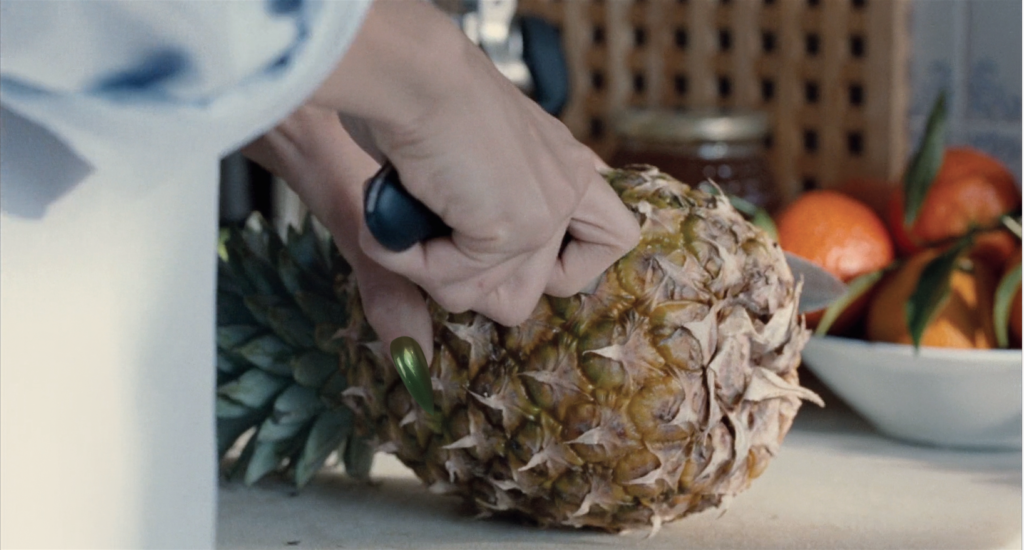 In 1978, musician Alice Cooper was one of nine private sponsors who paid to restore the Hollywood sign. Long-neglected by the city of Los Angeles, the iconic visual landmark had fallen into disrepair and had to be torn down. Signifying an era as much as a location, its presence in the city’s skyline was both a reminder and a celebration of a past golden age, and nine white men banded together to pay for its full restoration. Cooper donated more than $20,000 in honour of his friend and legend, Groucho Marx, who had passed away a year earlier. Cooper’s “shock rock” stage antics earned him an overnight reputation as a “freak” in Hollywood, but Groucho, the king of depressive farce, took a shine to the young man. Watching Cooper’s stage shows, Groucho was reminded of his formative years on the vaudeville circuit. Groucho would invite all his old pals from out of the woodwork, or at least those who were still alive, to see an Alice Cooper show. Jack Benny, Fred Astaire, Mae West—they all came and watched the skinny boys with painted faces hamming it up through corny stage tricks. They found this reincarnation of vaudeville to be hilarious, and saw Cooper as one of their own. No one else seemed to get the joke though: that none of this spectacle was supposed to be real, that the golden age of Hollywood, long since ended, had become a closed-circuit advertisement of its own invented glory.

There’s a moment in Aleesa Cohene’s video work Whoa (1 and 2) (2017) where a car drives away and into the vanishing point, framed directly below the Hollywood sign. On- and off-screen, the ubiquitous nine white letters hang over Los Angeles, but their reality extends into each of our virtual landscapes through the sheer magnitude of Hollywood’s stranglehold on our psyches. We consume American imperialism and we love it. We forget that the construction of narrative takes place inside the film industry—a manufacturer of junk-dreams where ideology buys itself a spot as easily as securing yet another product placement.

When you see everyone else believe and buy into the fantasy, it’s hard to remember that none of this was supposed to be real.

Trapped by the confines of its source material yet pushing against all its seams, Whoa (1 and 2) is composed of more than 500 Hollywood features, dissected and catalogued into gestures and moments. The meta-fictional world of Cohene’s work takes place in Los Angeles, a meta-city always in a state of reinvention and repetition. Complemented by sculptures, scents and photographs in the exhibition “I Don’t Get It,” the video is a pointed observation about the (re)construction of whiteness and blackness, as seen in the movies, and the extension of this construction into our daily encounters. As a continuation of her fastidious editing style, which here breaks down the suture of Hollywood narrative cinema into thousands of repetitious fragments, Cohene pieces the shards of racialized representation back together with derisive precision. In doing so, her process reveals how whiteness is completely interchangeable and formulaic in and of itself.

Carved from the incongruities of Hollywood films made between 2001 and 2016 and presented as a conversation across two screens, a loose narrative of two disgruntled neighbours, one black and one white, emerges from the blur. A black character composite is almost entirely confined indoors. Her facial emotions are afterthoughts, barely discernable as the camera rarely lingers long enough on her features. She is always doing something with her body, as her framing is never centered. She is always busy. When we see her face, she is looking distant, tired and bored.

In contrast, the white character composite moves freely between exterior and interior scenes. She is often just standing there, looking longingly at a distance, with her lips slightly parted. Sometimes there are tears welling up in her eyes, other times her face is just scrunched up, ready to cry. Her multifaceted body moves freely through the city streets. She may look sad and a little lost, but there’s an undeniable semblance of agency.

She cuts into a pineapple the wrong way and it sets a bad example.

Recently, Aleesa and I were next-door neighbours for a month in Los Angeles. For the first week, I try out all the different grocery stores within walking distance. Everyone I know in LA tells me to forget about grocery store produce. “It’s disgusting,” they say. “I just can’t,” they also say. Being a good neighbour, Aleesa drives me to the Hollywood farmer’s market one early Sunday morning so that I can experience the real deal for myself. She knows exactly what she wants, but I need some time. Everything about the hype was true as I joyously lost myself to the variety of freshly cut artichokes and designer avocados in front of me. We spend a lot of time with the nut cheese woman, who lets me try everything and gets me on a cashew tzatziki. Aleesa points out the organic Kokuho rice and I stop at the bread man to pick up some whole-wheat focaccia. In the context of that farmer’s market, I simply gave in to the blur of whiteness. I notice the Japanese man selling free-run roasted chickens. I notice the bread seller, a young black man with a nice smile who easily glides between speaking French and English. He was busy flirting with the woman in front of me, who had apparently been taking French lessons. For some reason, it’s really funny to her when he speaks. Heterosexuality is confusing, so I don’t think twice about it in the moment. I cannot remember any detail about what she looked like, because whiteness was everywhere. What I do remember is that when he spoke to her in French, it made her laugh even harder.

The foundation of critical race theory has been constructed from two material realities: whiteness and blackness. Of the two, one has managed to remain invisible beneath its shroud of default normalcy. So how do you critique something that the majority cannot see? What does whiteness even look like? And in an honest voice, how do you write about whiteness?

a Sunday morning at the farmer’s markets wearing yoga pants and flip-flops?

a sense of outrage and fear at the presence of racialized bodies in approximate vicinity?

an exchange of one-sided feelings over emails, phone calls and face-to-face meetings whose sole purpose is to safeguard the fragility of having privilege and said feelings?

Whiteness sometimes looks back at itself, but this gesture is not readily decipherable.

In more than 15 years as an art critic, I’ve found that when there’s a white artist critically talking about whiteness, suddenly nobody knows what to say anymore. But when a white artist makes culturally appropriative work, then a conversation occurs, as if whiteness itself had no racial history and was a blank default that could assume any race or culture it wanted. It shouldn’t matter if Cohene is a Canadian artist, except it does because she is having an American conversation. Of course you think and talk and live your race in America, but Canada is barely able to witness its own whiteness without trembling. There is an overarching fear that the wrong thing may be said. So the default is to say nothing at all.

Having the privilege to say nothing is whiteness.

Silence perpetuates whiteness as a universal state of being.

Cohene is white, but her white is not quite right. She is not Anglo-Saxon white, which is still the default colour of power in this country we call Canada. She is Jewish and white and queer, and that difference matters if you’re paying attention to the construct of whiteness. Her work is deeply aware of racial divide in a way that only a person who has felt ostracized can see and start to feel this difference.

Please note: being called a racist or simply being a racist is not the kind of ostracizing I mean.

At a recent awards ceremony in Toronto, I watched a group of rich white women celebrate themselves through acknowledging diversity in the arts. They interchangeably used the terms “diversity” and “newcomer” until the end, when they didn’t have to use either anymore since they gave the biggest cash prize to an awkwardly white institution. The cycle of whiteness, from “default” to “saviour” to “self-congratulatory allies” and back to “default,” took only three hours to pedal through.

It is perfectly acceptable to talk at length about a Group of Seven painting without ever talking about the class, race and privilege that led to its creation and collection, while in the same vein, it is perfectly reasonable to only pay attention to black, Indigenous and artists of colour when they make their differences pronounced, available and legible to whiteness. Why? Because like most shallow constructs, whiteness has been taken far too seriously, permeating our psyches and desires with its emblazoned sheen of hollow glory and delusions of past grandeur. 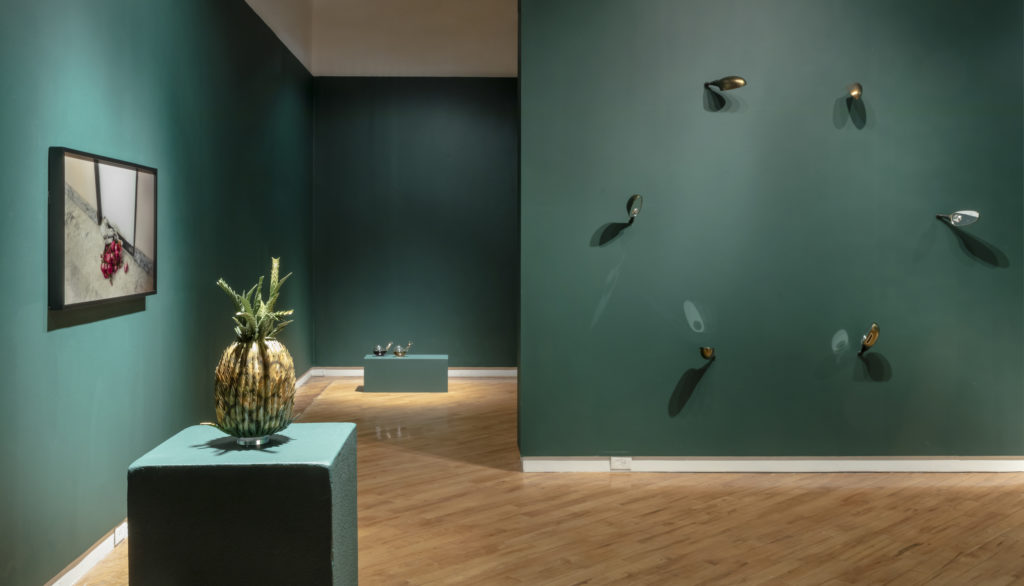 Aleesa Cohene’s “I Don’t Get It” was co-commissioned by Gallery 44 Centre for Contemporary Photography, The Rooms and Western Front, where it concludes its exhibition run on July 27. A publication accompanying the exhibition is available here. 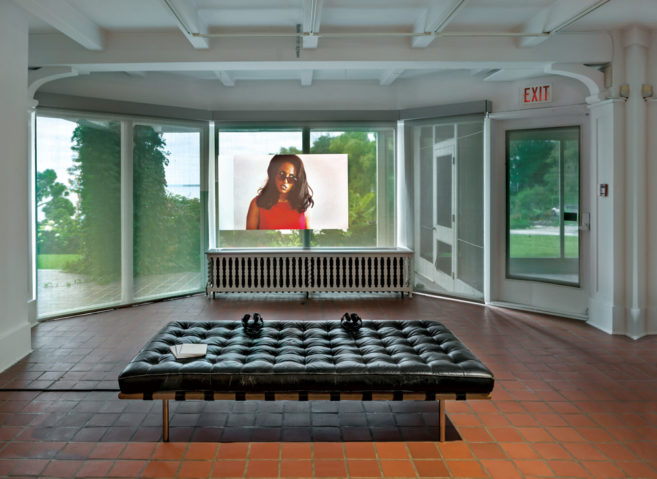 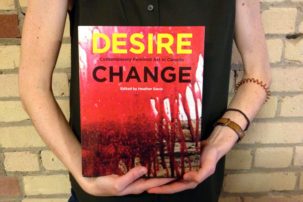 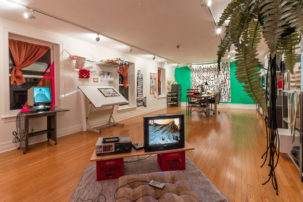 Gay Liberation, Sex Dungeons, Gossip, and What We Want in Art

Writer Amy Fung joins artists Hazel Meyer and Cait McKinney for a deep lez bro down about a project at the Canadian Lesbian and Gay Archives.