In revisiting a lost exhibition of conceptual art, CRUM create a singularly eccentric, yet seamless, show of their own. 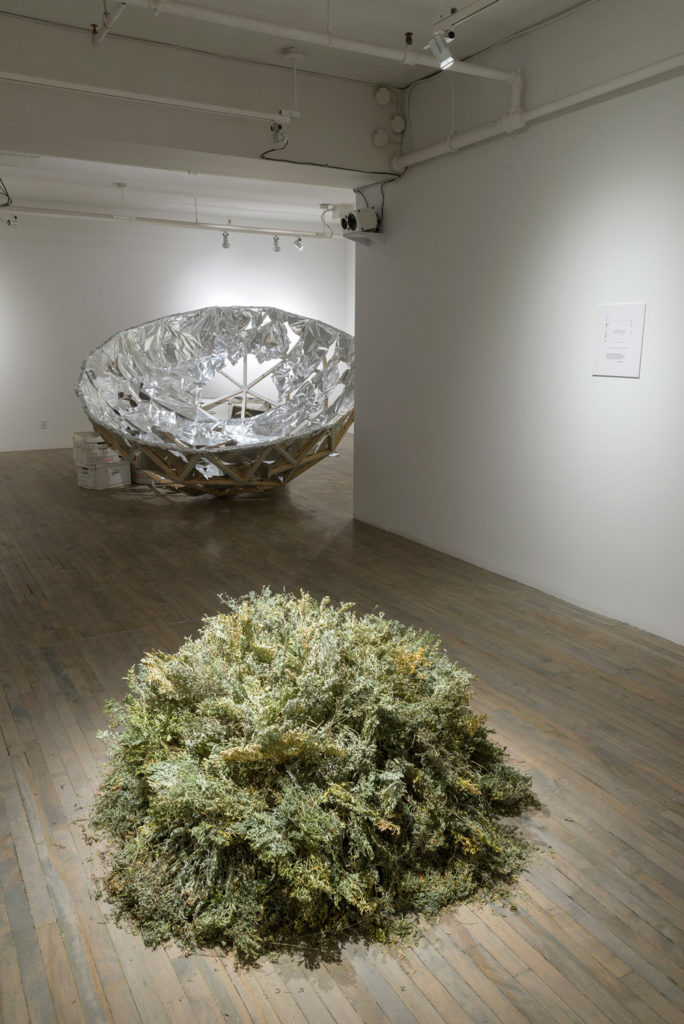 Over the last decade, restaging significant historical exhibitions has become increasingly popular. As part of the 2013 Venice Biennale, for example, the Fondazione Prada presented “When Attitude Becomes Form: Bern 1969/Venice 2013,” a project that painstakingly reproduced Harald Szeeman’s groundbreaking 1969 exhibition, “Live in Your Head: When Attitude Becomes Form.” More recently, the Neue Galerie New York revisited the Nazi’s infamous travelling show of modern art with their exhibition “Degenerate Art: The Attack on Modern Art in Nazi Germany, 1937.” In Canada, this trend is perhaps best exemplified by curator Philip Monk’s 2009 (re)creation of The 1984 Miss General Idea Pavilion at the Art Gallery of York University.

Presented in 1971 at the gallery of the Saidye Bronfman Centre (which became the SBC Gallery of Contemporary Art in 2006) and the Sir George Williams University Art Galleries, “45°30′ N-73°36′ W” featured the work of Canadian and international conceptual artists, including N.E. Thing Co., Gerald Ferguson, Michael Snow, Ian Wallace, Sol LeWitt and Lawrence Weiner. It is generally considered to be one of the first presentations of conceptual art in Montreal. Sadly, due to gaps in SBC Gallery’s archive, almost no documentation of the exhibition remains, apart from an unconventional little catalogue, which comprises a set of index cards featuring written instructions, drawings for the execution of works, and quotes from theorists and cultural figures popular at that time, including Sun Ra and Buckminster Fuller.

This idiosyncratic publication, along with the archival lacuna it symbolizes, served as the point of departure for “119 m Above Sea Level.” But while the CRUM clearly seeks to pay homage to the “spirit” of early conceptualism in Montreal, it appears equally disinterested in restaging the exhibition tout court. Instead, it has produced a complex, witty project that miraculously knits together an eclectic range of subjects, including the cosmic philosophy of Sun Ra; Buckminster Fuller’s hypothesis that telepathy is equivalent to “ultra, ultra-high frequency electromagnetic wave propagation”; electromagnetic radiation generated by radiofrequency (RF) emissions; altered states of consciousness brought about through various means, including the use of psychotropic plant matter; and, last but not least, connections between the preservation of heritage seeds, organic farming and intuitional archival practices. All of this is organized under the rubric of Accurism™, an obscure method invented by the CRUM to deal specifically with the challenges of this particular project.

“119 m Above Sea Level” generates much of its peculiar, yet compelling energy from a tension between construction and destruction, material and immaterial. The exhibition begins with two black-and-white photographs of SBC Gallery’s archive—before-and-after shots of the CRUM’s intervention into that space. The gap in the gallery’s documentation is evinced in the exhibition though the material presence of 27 dishevelled archival boxes propping up an inverted, hand-built geodesic dome covered in tinfoil. This structure alludes to Buckminster Fuller’s design for the US Pavilion at Expo 67, while also evoking a dialectic of transmission/reception and disconnection: the dome’s shape resembles a large satellite dish, while tinfoil is sometimes used by fanatics to block electromagnetic radiation.

At the back of the gallery, a subtly altered Trifield 100XE EMF Meter measures RF waves in the gallery, such as those emitted by text messages. Viewers are encouraged to text a cell phone number displayed beside the meter so they can watch it register this invisible transmission. Not far from the geodesic dome, an elegant pile of wormwood plants grown by a local organic farmer, Emily Board, from heritage seeds cultivated by an activist farmer, Patrice Fortier, conjures notions of communication with history (e.g.: the “spirit” of early conceptualism), mind alteration through spirits like absinthe and the revival of heritage plants as a “séance” with lost biodiversity. Finally, the exhibition space is filled with Carrière’s hypnotic sound work generated from original content and a collection of recorded interviews with Sun Ra.

What is so wonderful about this show, and much of what the CRUM does, is its commitment to a particular kind of conceptualism, one that eschews the stale hermeticism of an overly programmatic approach without devolving into cheap one-liners. Instead, intellectual rigour and politics mingle with a tongue-in-cheek sensibility to create an eccentric, yet somehow seamless exhibition.