Cliff Eyland Returns to the Library in Halifax Project

In a new commission at the Halifax Central Library, Cliff Eyland employs his signature painting format to highlight the institution's changing role. 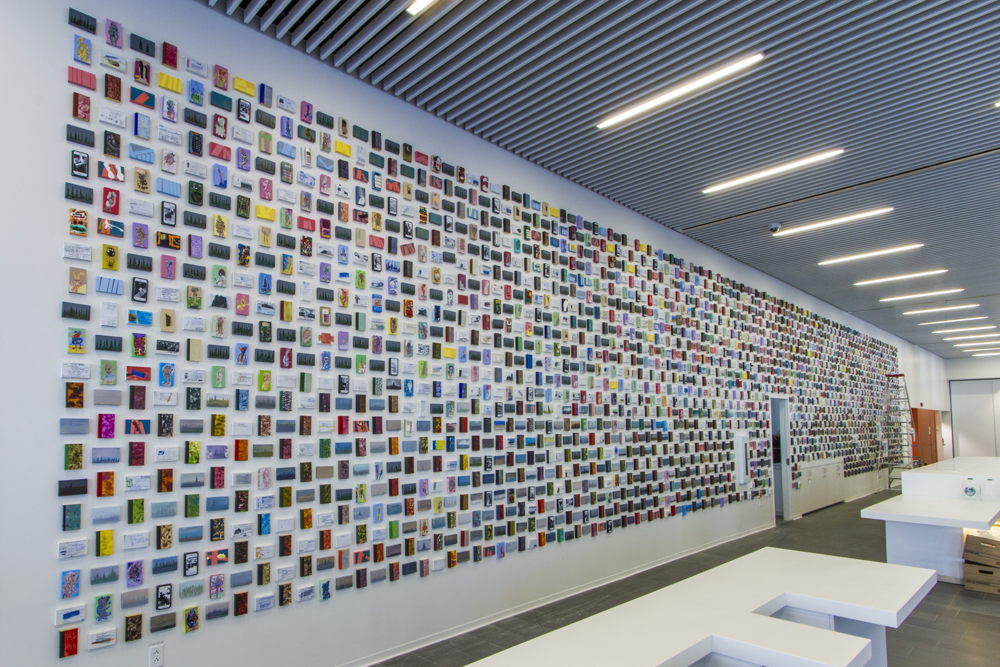 Having patiently watched its construction evolve and take shape over the course of a few years now, the new Halifax Central Library opened its doors this past December to much anticipation. The eye-catching, five-storey structure offers an abundance of curb appeal in its clean lines, bold colours and slick materials, while boasting approximately 120,000 square feet of space, enough to accommodate a reading collection twice as big as its predecessor, the Spring Garden Road Memorial Library. With stairs and walkways crisscrossing the grand space beneath a sun-filled atrium on the interior and, on the outside, a glass-cladded façade that resembles a carefully stacked pile of cantilevered books, the design scheme by firms Fowler Bauld and Mitchell of Halifax and Schmidt Hammer Lassen of Denmark has been met with rave reviews locally, while also garnering critical acclaim in international architectural circles. This initial feedback would suggest that the wait was well worth it and expectations have been surpassed. Adding to the excitement and positive buzz is, arguably, one of the city’s most significant public-art commissions to date: an equally well-received and thought-out installation by Cliff Eyland.

The Winnipeg-based artist isn’t a stranger to these parts. Born and raised in the province, Eyland attended the Nova Scotia College of Art and Design in the early 1980s. While at the school, his exposure to the likes of Robert Morris (see his Card File, 1962) and other artists of the same period—On Kawara and Daniel Buren, for instance—made a lasting impact on the impressionable young student. Interested in conceptual art strategies that embrace elements of language, process and chance operations, Eyland then and there adopted a systematic approach for his own production in the three-by-five inch painting format for which his is now widely known. He hasn’t looked back since. What has resulted in the three-plus decades that have followed is nearly encyclopedic in scope, as evident, to an extent, in the two distinct groupings of Eyland’s signature file card–sized works at the Halifax Central Library.

Library Cards, located behind the front desk on the library’s main level, is comprised of 5,000 unique paintings, collages and drawings. The 1,000 works that make up his Book Shelf Paintings occupy a wall in the “living room” on the fifth floor. Each of these groupings has been arranged on a grid with the placement of the individual paintings themselves “being with and against the organization of books on a shelf,” as the artist says. Whereas the Book Shelf Paintings are all two-colour abstractions of books leaning against one other, the more expansive Library Cards draws upon a diversity of subjects related to notions of place and the site itself: books of a bygone era, dreary landscapes, grey skies, highway scenes, librarians and patrons, green trees, Federation of Nova Scotian Heritage library cards and fanciful cell phones.

In the making of the works that collectively constitute Library Cards and Book Shelf Paintings, Eyland employs a hand that is clearly steeped in a respectful understanding of art history, but, at the same time, appears driven by do-it-yourself ethics and the vast potential that rests therein. The overall arrangement, let alone the minute details embedded in each of its components, is more than visually consuming. His aesthetic choices are far from superficial, though. Evident is a coherent study of the general principles of organization and, more specifically, an even closer examination of those principles as applied by institutions in the past and the present to such cultural documents as books and artifacts (or art objects for that matter, if thinking about museums and galleries). Here, Eyland’s work gives pause to consider the changing function of libraries in particular, from an earlier role of information gathering to centres for a different type of community engagement altogether today.

This certainly isn’t the artist’s first, nor likely his last, visit to a library. In fact, during his undergraduate studies at the Nova Scotia College of Art and Design, he cut up H.H. Arnason’s History of Modern Art into three-by-five inch pieces that were then inserted amongst the file cards of school’s library catalogue. As part of numerous curated exhibitions, he has quietly hidden his drawings in books at the New School’s Raymond Fogelman Social Sciences and Humanities Library in New York, the Art Gallery of Ontario in Toronto, the National Gallery Library and Archives in Ottawa and the Muttart Library in Calgary, to name some. Beyond these and other unauthorized interventions, he has successfully completed previous large-scale commissions at the Winnipeg Library in 2005 and at the Edmonton Meadows Library in 2014. The Halifax Central Library marks yet another chapter in Eyland’s storied relationship with this establishment, one involving the remarkable payoffs of a highly persistent practice for artist himself and, in this case, the broader public, too.