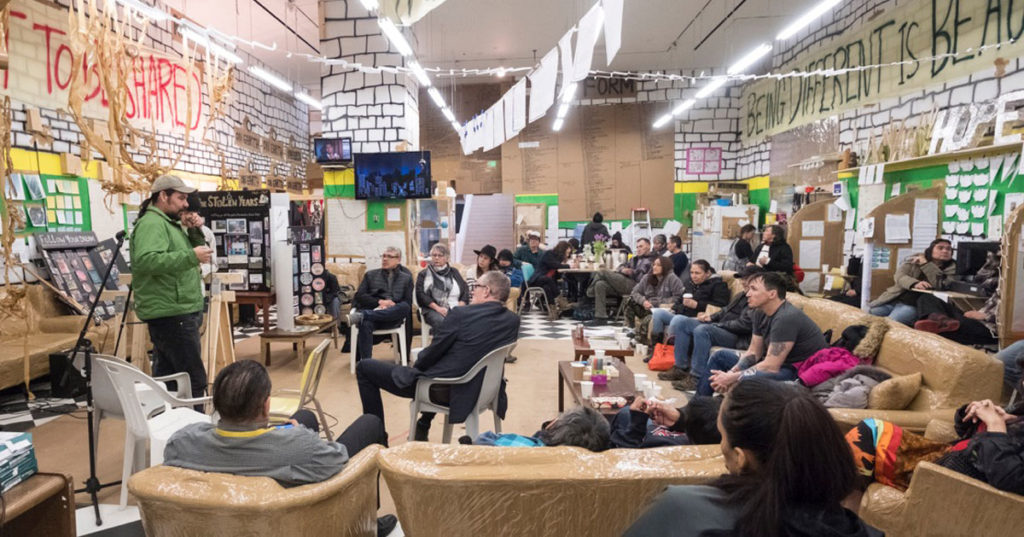 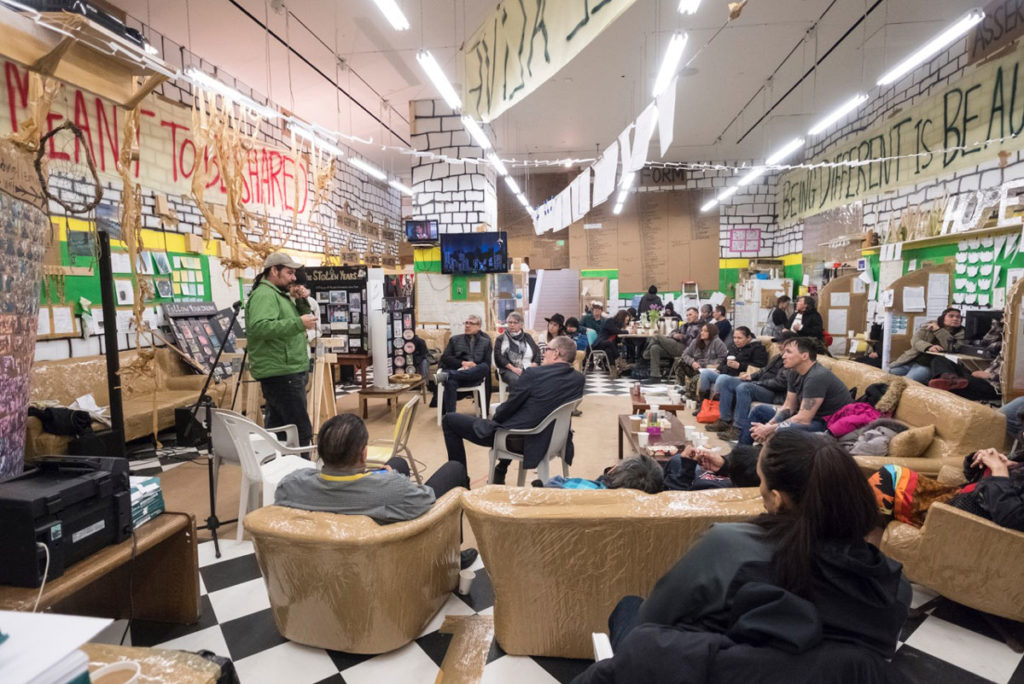 Artist Thomas Hirschhorn (centre) listens to a “teacher” from the local community as part of his recent “critical workshop” installation, “What I can learn from you. What you can learn from me,” at the Remai Modern in Saskatoon. Courtesy Remai Modern. Photo: Dave Stobbe.

Walk into Thomas Hirshhorn’s recent exhibition, titled “What I can learn from you. What you can learn from me,” at the Remai Modern and take a seat. Notice the electric guitar leaning against a wall; the giant, half-carved Styrofoam block; the computers and printers; the coffee and cookies on offer; the emancipatory slogans spray-painted on banners across the walls; the big hand-written cardboard signs taped around the gallery entrance; the (signature) packing tape-wrapped sofas; and, especially, the incongruous mix of people in the room.

The scene recalls a description (credited to Mathieu-François Pidansat de Mairobert) of the Paris Salon of 1777: “But here nevertheless is a thing to delight the eye of an Englishman: the mixing, men and women together, of all the orders and all the ranks of the state…. Here the Savoyard odd-job man rubs shoulders with the great noble in his cordon bleu; the fishwife trades her perfumes with those of a lady of quality, making the latter resort to holding her nose to combat the strong odor of cheap brandy drifting her way; the rough artisan, guided only by natural feeling, comes out with a just observation, at which an inept wit nearby bursts out laughing only because of the comical accent in which it was expressed; while an artist hiding in the crowd unravels the meaning of it all and turns it to his profit.”

Framed as a “Critical Workshop” (a recurring motif in Hirschhorn’s practice), “What I can learn from you. What you can learn from me” promises a utopian future for art galleries. No admission charges and open access (visitors to this show may borrow special bracelets made of packing tape that grant them free admission to the rest of the gallery). Out with all repressive forces: security guards, curators! (Directors are curiously exempt from the emancipatory formula.) And the entire edifice of artistic nobility is upended: the purposefully gauche, loud and cheap stage-set of Hirschhorn’s installation replaces the traditional taste and cultivated sensitivity of a major institutional show. Is this Andy Warhol? Maybe, but it’s closer to Joseph Beuys’ “everyone is an artist”—the gallery decked out in maker-stations, a spectacular kitchen of crafting and telling. And, shaman-like, the artist is present, all day, every day. In what was surely an exhausting run for Hirschhorn, a charismatic, passionate and attentive emcee, his exchanges with visitors didn’t hinge on belief, trust or even good will. They began with a simple premise—everyone is “competent” and has something to teach.

Almost 20 people put their hats into the ring every day (more than 400 lessons had been presented by the time the exhibition closed), and a healthy crowd of discussants regularly filled the space. Many came back again and again—to listen, talk and teach. It became a thing, a community of sorts. Of course, it didn’t happen spontaneously. Artist and curators worked hard to orchestrate the remarkably coherent and diverse crowd that gathered over the four-week run. Hirschhorn made several trips to Saskatoon before the show, visiting friendship centres and shelters to solicit teachers and listeners for the upcoming workshops, following a pattern of focusing on working-class neighbourhoods and disadvantaged communities in past projects, especially his critically regarded (and arguably problematic) “monuments” to philosophers Spinoza, Bataille, Deleuze and most recently Gramsci.

I walk in and find a place to sit. The first “teacher” I hear is a neurology student who uses a flip chart for his discourse on the brain. He talks about ways of knowing and the mechanics of reception. His talk is videotaped, pictures are taken and he speaks into a microphone (everybody does). Questions are asked and answered—the room is full and people are engaged. A young Indigenous woman steps up next. She shows a few crafted items she says help make her home feel like her own. She explains her ideas are taken from Pinterest and proceeds to show a shoe box painted in a black-and-white pattern and a small rag rug. Hirschhorn smiles and seems a little skeptical. He asks her why she isn’t using beads or drawing on traditions closer to her culture. (Why should she?!) After a few innocuous questions from the audience, she withdraws.

Hirshhorn allegedly defers to the “competency” of the people: “Everybody can teach his or her personal competence. Everybody can learn about the competence of the other,” as the first of the exhibition’s “key points” states. But in this flattened utopia of liberté, égalité and fraternité, some teachers are evidently more competent than others. Perhaps “competence” is too ambitious a measuring stick, and what Hirschhorn is really looking for is authenticity.

Many of the “lessons” are confessionals: stories of hard lives, addiction, near-death experiences, sexual abuse, prison. Salvation is frequently invoked in the form of religion or cultural tradition. One man, referring to previous lessons he’s delivered, apologizes to the artist for the bad faith with which he first came to teach. Hirschhorn tells him he has no reason to feel remorse, that he himself is entirely responsible for setting up the terms of exchange. He makes his point adamantly and does his best to absolve the man of guilt. His reassurances seem sincere and he has clearly won many hearts in the room.

A skeptical listener addresses the artist immediately after the Remai’s Executive Director and CEO, Gregory Burke, delivers a seemingly spontaneous presentation on his close relations with and respect for Māori people in New Zealand. Ignoring that lesson, the skeptic confronts the artist, “You say you’re against the institution, but you’re actually working for it.” Hirschhorn answers: “In fact, I’m working with the institution.” In other words, he’s independent and the gallery housing his event is a kind of parallel space: he uses the institution for his own ends.

Another listener (this one is a regular) asks: “What happens when you leave? We have a place now, but what happens when you leave?” The discussion has shifted to the project itself. Hirschhorn’s answer exposes an inescapable conundrum, and perhaps more broadly, the contradictions that socially minded artists always grapple with. “You have to do it yourselves,” he says. “It’s true, I am leaving, and when I do, you must [remember this experience and] push back on the institution.”

The answer may seem like cool hand-washing, or even worse. Considering the prospects for institutional change or concrete political action, it’s easy to argue that Hirschhorn’s utopian gestures are ineffectual. He espouses “working-with-community,” but his “communities” are synthesized and only coherent temporarily: through their specific neighbourhood sites; temporary alignments with local residents; or here, in cash transactions: each “teacher” is paid a $100 fee for their lesson. Cynics might argue that these carefully constructed social scenes are actually exploitative.

Hirschhorn commits his work unabashedly to the cause of art. He has stated that he borrows from Jean-Luc Godard when he claims to make art politically rather than make political art. “I believe in art and I have faith in art,” he writes in the exhibition text. “I think that art is an inclusive movement and that art should include the ‘Non-exclusive audience’, the Other, the Neighbour, the Stranger, the Unknown, the Un-interested.”

In the end, “What I can learn from you. What you can learn from me” is not activism. It’s a picture—a picture meant to inspire. Hirschhorn’s answer to the question “What happens when you leave?” reminds his participants of this. He provides the seeds. Maybe they sprout or maybe not, but for now, his job is done and he’s off to the next port.

Marcus Miller is director of the Gordon Snelgrove Gallery at the University of Saskatchewan where he teaches courses in the theory and practice of contemporary art. He has worked across Canada as a curator, teacher and critic.