What Does Art Do? Canadian Artists Make a Mark in Gwangju

Duane Linklater, Nadia Belerique, Hajra Waheed and Mohammad Salemy are among the Canadians inquiring into the state of art, and the world, in Gwangju. 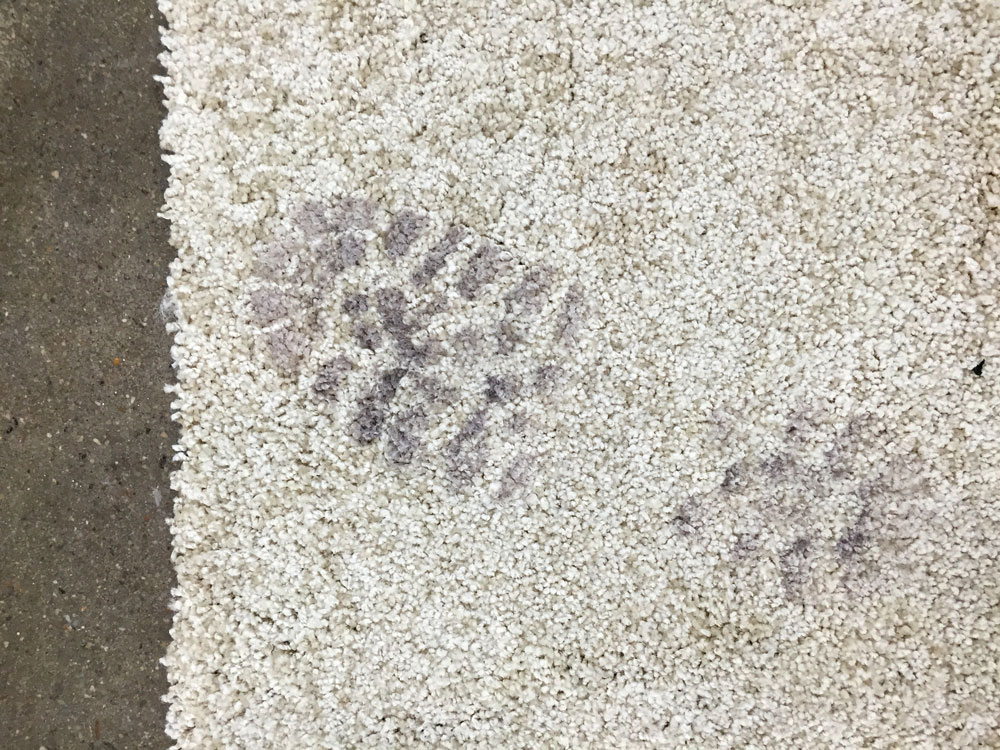 Nadia Belerique's Have You Seen This Man (2) (2016) consists of a liquid-light photosensitive emulsion on carpet that records the imprint of visitors' footsteps at the Gwangju Biennale.

by Aileen Burns and Johan Lundh

Within the past week or so, three biennales have opened in Korea.

The oldest one, the Gwangju Biennale, is the largest and was at the forefront of the first wave of biennales in East Asia. Since its first edition in 1995, it has uniquely fostered curatorial practice in a socially and politically charged environment.

The Busan Biennale, three hours’ drive from Gwangju, opened in 1998 and focuses on art from Korea and its neighboring counties.

The Seoul Museum of Art’s Mediacity, operational since the early 2000s, has become a key regional event centered on new media and has built an increasing international significance over the past decade and a half.

Taking in these exhibitions in just a few days, we found much to reflect upon about the state of art, the state of the world, and the intersections in between. Four Canada-connected artists were featured in these events as well, contributing significantly to the conversation. 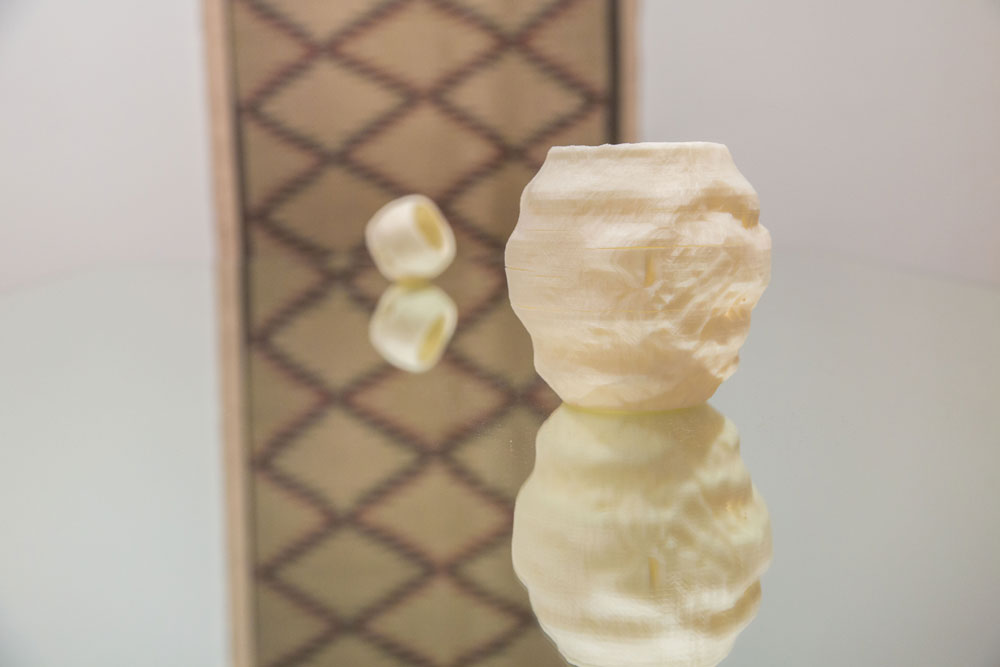 Featured at Mediacity in Seoul and originally produced at the Utah Museum of Fine Arts, Duane Linklater’s 3-D prints of “anonymous” Indigenous artifacts suggest the violence of historical erasures.

Entitled “Two Billion Light Years of Solitude,” the main project for Mediacity this year features more than 70 artists and groups from around Asia and further afield, including major figures like Bik Van der Pol, Pierre Huyghe and Carolee Schneemann, among others.

Omaskêko Cree artist Duane Linklater, who is based in North Bay, Ontario, is also situated prominently in the main exhibition space of Mediacity show. His installation takes the exhibition’s new-media focus in an unexpected direction.

During a recent residency at the Utah Museum of Fine Arts, Linklater 3-D scanned Indigenous artifacts from numerous cultures of North America’s west, all assembled from the collection of the museum. These objects are, however, lacking a key piece of information: none has been attributed to a specific author or artist.

By scanning, and then reprinting, a selection of objects—including a Haida model totem pole and a Kwakwaka’wakw raven mask—in bone-white plastic resin, Linklater emphasizes the violent removal of information, culture and context that the objects have been historically subjected to.

It should be interesting to see what one of Linklater’s next 3-D printing projects, part of a grant program at Toronto’s Think2Thing, investigates. 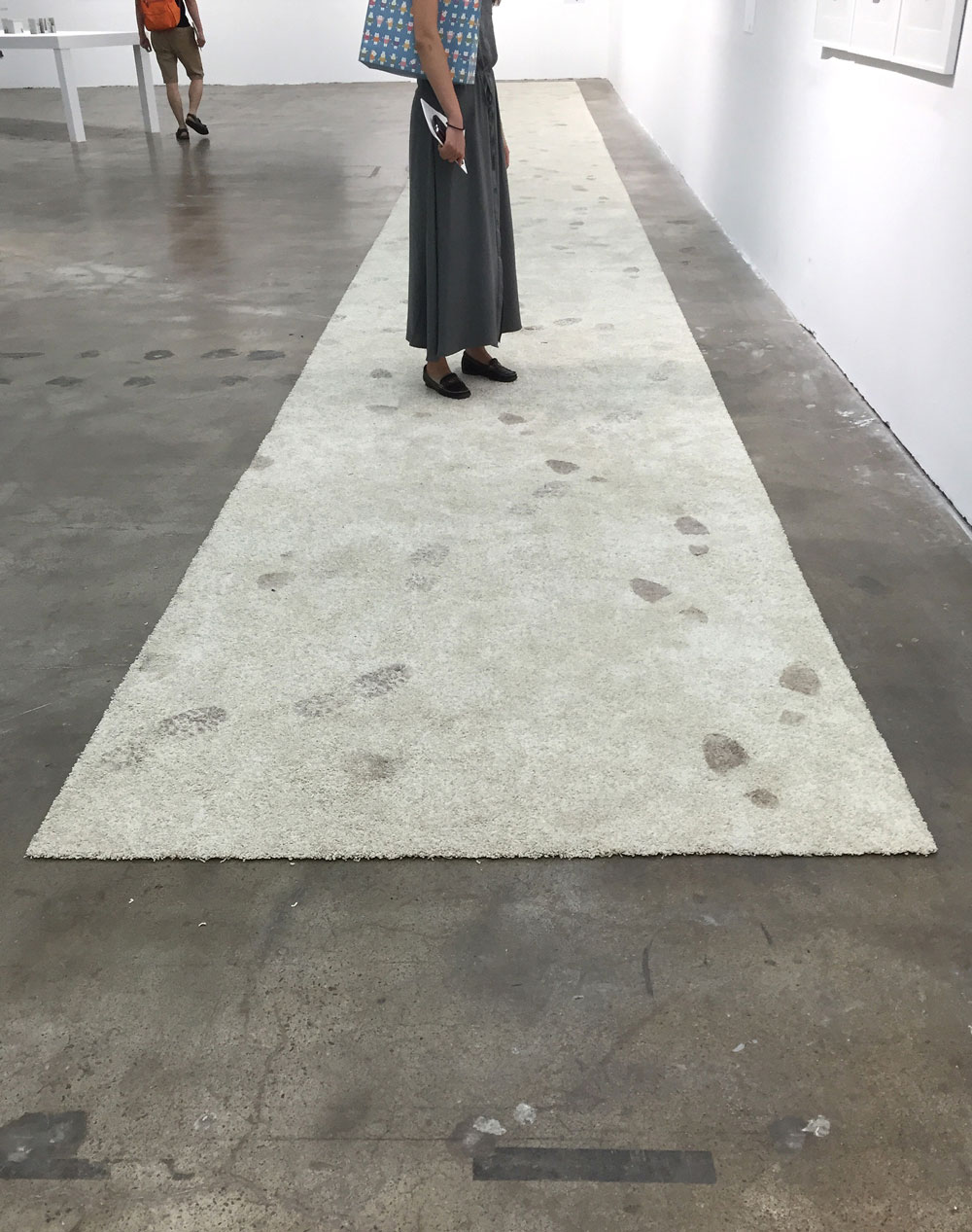 Nadia Belerique’s Have You Seen This Man (2) (2016) consists of a liquid-light photosensitive emulsion on carpet that records the imprint of visitors’ footsteps at the Gwangju Biennale.

A similar interplay between art, technology and the aggressive imposition of control—both in a colonial and ecological sense—are key concerns for the 11th Gwangju Biennale.

Stockholm-based curator and critic Maria Lind, who is serving in the biennale’s top curatorial role this year, is known for advancing discourse on curatorial practice. Thus, it should come as no surprise that the framing of this year’s exhibition simultaneously situates the biennial in the real world and in the art world.

Lind’s project, “The Eighth Climate (What does Art Do?),” takes its title from a 12th-century Persian concept that articulates a space in between material and immaterial worlds. As Lind posits, it is in this interstitial zone where art does whatever it is that art does, an open-ended concept/question that applies across the entire exhibition.

True to Lind’s interest in curatorial practice, and the role of the curator as mediator, she has choreographed four main exhibition halls so that each takes a distinct approach to two questions: What does art do? And how might it be combined to make new meaning through thoughtful pairings and juxtapositions?

Very little exhibition architecture has been built in the galleries, in favour of foregrounding relationships between artists. Lind has almost exclusively opted to use artworks to create the mise-en-scène for each exhibition hall.

Two other major biennials in the past year—Liverpool and Sydney—also subdivided their expansive shows into subthemes. However, Lind’s strategy is distinct. There are thematic threads that run through all of the exhibition galleries and off-site locations, such as the impact of the epoch being called “the Anthropocene,” the effects of human-machine hybridization, and the liberation and protection that stems from various forms of abstraction.

What structures the actual installation of each room is more formal. There is, for example, a room devoted to abstraction, as well as a blackened space where a field of screens play more than a dozen films simultaneously.

One enters the first hall through Ruth Buchanan’s Split, Splits, Splitting (2016), a glittering pink-and-green chain-link curtain that is cool to the touch and chimes like a series of little bells as you part it. A monumental installation by Dora García anchors the room in which artworks repeatedly invoke the destructive forces of government policy on societies and environments around the world. Titled Nokdu bookstore for the living and the dead (2016), the work is a replica of a bookshop in Gwangju that was central in fostering the democratic uprising of May 18, 1980, which resulted in more than 600 deaths and which the biennale itself was set up to memorialize.

The destructive forces of war and governmental repression are central to other works in this room, such as Suha Traboulsi and Walid Raad’s Yet Another Letter to the Reader (2016)—which, as Sarah Cascone puts it, is “purportedly Traboulsi’s recreation of paintings made during a stint as the chief registrar of public collections in Lebanon.”

A more playful take on the challenges of national bureaucracy is found in Amalia Pica’s Joy in Paperwork (2016). Pica’s monumental installation of drawings is made with administrative stamps on standard A4 printer paper.

On a similar note at the Gwangju Biennale, Toronto-based artist Nadia Belerique has created digitally manipulated photographs with a standard-issue office scanner. Her eerie abstractions are suffused with suggestions of haunting figures made up of digitized clippings from Toronto Star archives. 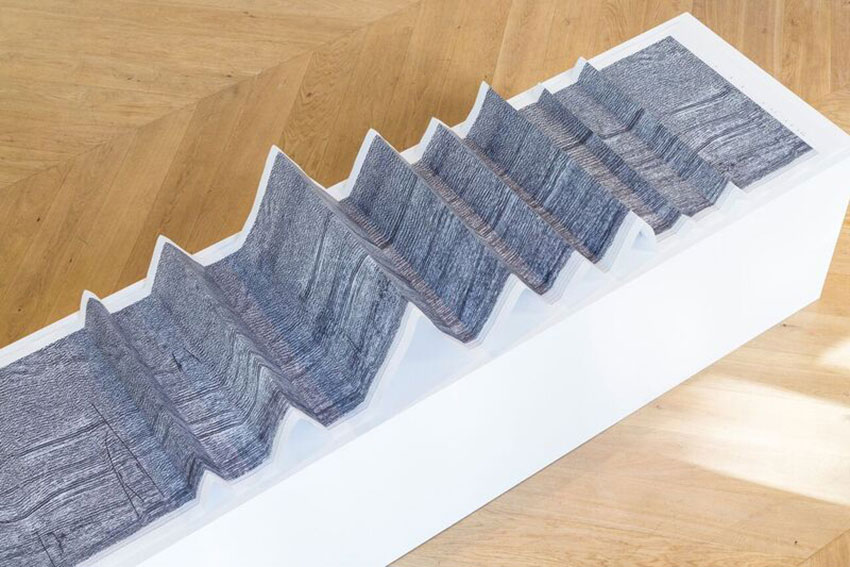 Two concerns that carry strongly through the Gwangju Biennale are the destructive force of human activity on the planet, and the future as imagined through entanglements between humankind, technology and the environment.

These themes come to the fore in works by Montreal-based artist Hajra Waheed. Her Untitled (Map) is, as the biennale puts it, “a classified map of the largest offshore oil field in the world, located 265 kilometers north of Dhahran, Saudi Arabia, where the artist spent her youth.” On a different mapping note, Waheed’s Still Against the Sky 1–3 offers “three folded pages stippled with stars that convert the infinity of space into something pocketable, almost manageable.”

Also on these themes, one of the most compelling experiences in the Gwangju Biennale is a new commission by Fernando García-Dory. For the piece, Dory collaborated with residents of the neighborhood around Hansaebung Dure—the last remaining rice paddy in Gwangju—to produce an eco-play set in the fields called Lament of the Newt (2016). This heartwarming piece of community theatre was presented with such care and precision that the pride and belief in its message were palpable.

Dory’s piece did one of our favourite things that biennials can do: it took us out of the exhibition hall, out of the usual sites for tourism, and into an active and critical site for local residents.

Another essential role of the global biennial circuit is the coming together of artists and various other professionals in the field to share concerns and experience work together. Lind’s “The Eighth Climate” was especially successful in this regard. Nearly all of the 100 artists in the show were present for the opening and, in addition, Lind designated more than 100 small-to-medium scale art institutions around the globe as “Fellows” in recognition of the role these galleries play in the global arts ecology. Among these fellows were the Western Front in Vancouver and SBC Gallery in Montreal.

From September 2 to 4, representatives of nearly 70 of these fellow institutions from around the world were brought together to discuss the central question posed by the show’s subtitle: “What Does Art Do?”

Rather than coming to any profound understanding of what art does or productive next steps for art and institutions, the forum created a sense of value and belonging for the kinds of institutions that often devote extraordinary emotional, technical and, where possible, economic support to artists for the production of new work that often goes unrecognized—even as those artworks make their way onto the global stage through biennials in Busan, Seoul, Gwangju and beyond.

Reflecting on this point, it is worth noting that one of Duane Linklater’s prominent early works, at neon thunderbird, was first shown at North Bay’s artist-run White Water Gallery, that some of Nadia Belerique’s first professional exhibition experiences were at the Toronto collective-studio setup the Whitehouse and the artist-run Double Double Land, and that before he joined the New Centre for Research and Practice in New York, Mohammad Salemy curated a group exhibition at Vancouver’s non-profit Access Gallery.

Canadian Aileen Burns and Swede Johan Lundh are currently co-directors of the Institute of Modern Art (IMA) in Brisbane, Australia, which is one of the Gwangju Biennale’s institutional fellows. Between 2011 and 2013, Burns and Lundh were co-directors of the Centre for Contemporary Art in Derry, Northern Ireland, and were part of the curatorial team for the 2013 Turner Prize.