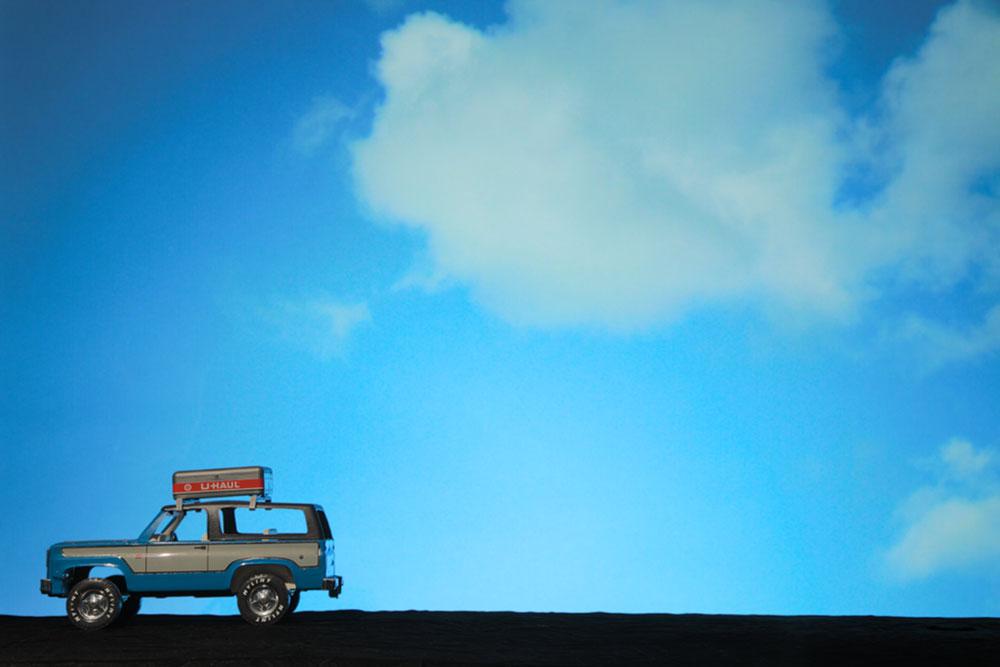 There is often a straight-faced wink in the work of Toronto-based artist Wendy Coburn. Like her work, the artist (disclosure: I’m currently curating a performance by her) is quiet and understated, as well as expansive and charismatic. Yes, she winks. No stranger to the use of humour, Coburn has the ability to turn a joke on its head, revealing the many shards of its composition.

UHAUL Suite, now on display at Core Realty, a boutique brokerage in Toronto’s Leslieville neighbourhood, is a series predominantly made up of paired photographs that evoke early stop-motion work. In the series, toy U-Haul trucks, trailers and roof racks that the artist bought on eBay are positioned in front of screens onto which Coburn has projected shifting skies.

Coburn has played with queer clichés in the past, and they are evoked again here as one is reminded of the exchange “What does a lesbian bring to the third date?” (Answer: “A U-Haul.”) And to be sure, a brokerage is a fitting context for images of moving trucks, but why was the series created in the first place? Coburn has a richly theoretical mind, and in playing with surfaces—even the most superficial joke—she reveals profundity.

To me, UHAUL Suite is a suite of dreams. Each image depicts the fluid connectedness of love.  Each image is both an arrival and departure. Our relationships, the series reminds us, continually augment and sometimes diminish, but always transform us. It is our relationships that repack and so rewrite our varied emotional baggage.

As a form of Freudian slapstick, Coburn’s work ignites our ability to laugh at ourselves and, in so doing, to move through the harrowing sadness and entrapment of our emotional wounds. That Coburn positions these “couplings” as the core of who and what we are seems especially appropriate given the name and business of this brokerage. Not on a gallery wall, but on the pregnant pause of our next move, UHAUL Suite asks, Will you have me?

Take, for example, the paired photographs of UHAUL Suite #3. In the left-hand photograph, a sprightly and energetic truck, as bright as the sunny blue sky above it, and with very little baggage in tow, drives towards the viewer’s left. In the right-hand image, that same truck sinks under the weight of an eruptive sky and the extra trailer it now pulls in a tumultuous exit to the viewer’s right.

And yet that darker right-hand picture is, to me, not the sad image. Instead, it is the promise of potentiality in the brightness of the blue in the first image, in the relative lightness of its truck’s movement, that more regrettably contains the story of its own impending conclusion. Behind a spaciousness of sky, in a swirl of cloud and buoyancy, lurks inevitable deflation: a breathless embrace that’s become but a thumbprint; a titillating promise of accompaniment, of sustenance, of rapture, all aborted.

Granted, some of the images in the series celebrate departure or arrival with hope, but throughout the whole series, one mood lends itself to yet another ad nauseam. This too, is accurate in its way; in life, we never leave a scene or an encounter without the reciprocal transformation of accumulation or the sloughing off of bits of ourselves.

Although couched in romantic relationships, Coburn’s depictions of coming and goings are universal: they tell the stories of our interaction and, so, the stories of who we are.

In What I Loved, American novelist Siri Hustvedt writes,

Every story we tell about ourselves can only be told in the past tense. It winds backward from where we now stand…. The trail behind us is sometimes marked with stones like the ones Hansel first left behind him. Other times, the path is gone, because the birds flew down and ate up all the crumbs at sunrise. The story flies over the blanks…

In front of the screened skies of UHAUL Suite, I stand frozen, boring into the relative expansiveness of the images with an intensity that makes my head hurt. Through the ever so slightly pixellated surface, I hear what French literary theorists Gilles Deleuze and Felix Guattari call “the refrain,” a sonorousness that has territorialized the entire photographic space for me—even the entire brokerage. It is the hum of loneliness, of abandon, of longing.

Yes, there is the joke—a joke that tries to deflect the agonizing tragedy of love. But the narrative arc dominates. Such is one of Coburn’s prominent gifts as an artist—she’s a storyteller. Her voice is steady and she makes the surface speak.

Hansel and his stones or breadcrumbs are nowhere to be seen in UHAUL Suite, but Gretel shakes a furious fist, and in her fingers she clenches a caveat: Love me, love my U-Haul.