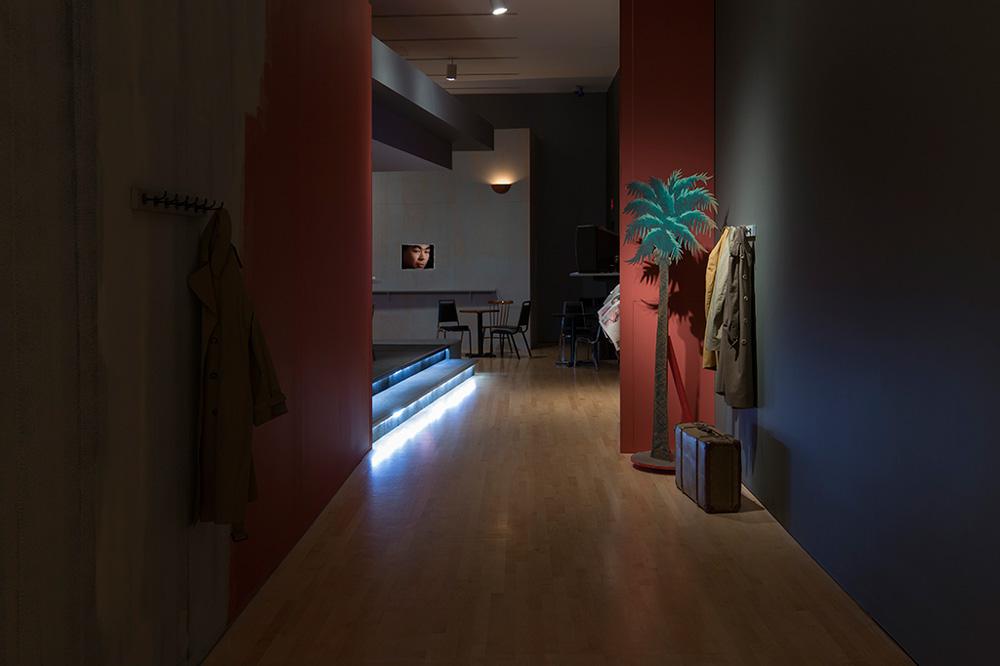 The entrance to Vera Frenkel's ... from the Transit Bar, a 1992 installation first premiered at Documenta that the National Gallery of Canada recently reconstructed and exhibited. The installation includes a working bar, a player piano, plants, newspapers, raincoats and video monitors, among other elements.

When I visited Vera Frenkel’s …from the Transit Bar (1992), recently on view at the National Gallery of Canada, the artist was moonlighting as barkeep for the first (and last, for it was the final day of the exhibition) time in this iteration of the work. She joked about measured spouts that top the bottles of spirits and the cumbersome computer program that replaced the installation’s original analog cash register. The hired bartenders sat on the other side of the bar as she poured us all generous whiskeys, waters and vodka cocktails with the grace of an experienced host. And we sat there, sipping, chatting, reflecting.

…from the Transit Bar is an immersive installation including a six-channel video on variously situated television screens, a player piano, lights, newspapers, fixtures—all banal furnishings—as well as a fully functioning tended bar. Made for and first shown at Documenta IX in 1992, the installation is not just a riff on well-established cultural institutions of drinking. Rather, it uses the format of the bar as a rumination on migration, alienation, unfamiliarity and shared experiences of transience.

Among the plastic palms and mismatched furniture are suitcases, stowed variously along the perimeter of the room. These pieces of luggage, and other things like trench coats hung neatly on designated racks, are unmoored from their owners—the regulars, imaginary patrons who might own these effects and are mere spectres, absent from the space. Yet there are forms of presence here, too: the videos host vignettes of people who regale visitors with stories of exile and migration, of dislocation from home. Each story is told with a voiceover in Polish or Yiddish, languages that the artist presumes few visitors could understand, with accompanying subtitles in French, English or German. As such, visitors to the Transit Bar are forced both to confront and experience a sort of alienation (linguistic, physical) perhaps comparable to that of a migration from home, which necessitates the navigation of new, unfamiliar spaces. Through the social and cultural venue of sharing a drink with a stranger, the installation seeks to erode the boundaries between familiarity and isolation, opening up a space where this reckoning might result in the fostering of empathy. Share a drink, share a story, and understand another’s plight.

Frenkel organized the space in such a way as to expose its inherent artificiality; walls intersect at angles of not quite 90 degrees; holes in the drywall expose the messy particleboard insides of the installation’s walls, which stand apart from the clean white ones of the gallery; the lighting is not quite right (not bright enough for an exhibition, but perhaps too bright for a bar); the grey and red paint, unfinished in some places, is a bit too neat, unscarred from daily wear; and despite the use of quintessentially bad dive-bar furniture, the Transit Bar lacks the patina and vaguely-dank smell of a well-loved tavern. This impetus to make visitors aware of the simulacral nature of the space is Frenkel’s way of creating a sort of democratized situation; no one is at home in the Transit Bar, and we are made aware of this through the spatial and conceptual arrangement of the installation. In supplementary material related to the exhibition, it becomes clear that a sense of unease in the installation is hoped to encourage viewers to consider the contingent discomforts of the diaspora.

And while …from the Transit Bar takes up issues particular to immigration, it speaks more broadly of fundamental human connection; it operates on the premise that engaging with the narratives of others inspires a sort of ameliorative situation. Perhaps most telling of the limits of these utopian (or are they atopian?) ends are the newspapers, in various languages, neatly hung on the wall in the Transit Bar. For those to whom these languages are foreign: does the news tell of the atrocities and civilian fatalities in Gaza? Or the violent and untimely death of a 15-year-old First Nations girl in Winnipeg? (And the government’s continued reluctance to address the underlying social issues that enable such wild violence to occur?) Do they detail the inhumane immigration policies being pushed through bureaucratic channels? Frenkel facilitates a situation wherein such marginalized voices might be heard. But I wonder, who is listening? And is it enough?