“I see this as unceded territories. I have never surrendered this to you." So begins a journey into some of the most-discussed art in Vancouver today.

A view of Beau Dick's exhibition “Lalakenis” at the Belkin Art Gallery. In this part of the exhibition, objects related to a ceremonial journey undertaken by Dick are arrayed on top of pieces of Cathy Busby's WE ARE SORRY, which reproduces Stephen Harper's official 2008 apology to Indian Residential School survivors.

A view of Beau Dick's exhibition “Lalakenis” at the Belkin Art Gallery. The video and wall map record parts of a journey Dick took to enact a copper-cutting ceremony (a ritual which signals, in part, a breaking of old relations) at government buildings.

Another view of Beau Dick's exhibition “Lalakenis” at the Belkin Art Gallery.

Artist Lawrence Paul Yuxweluptun—larger than life in video projection—instructs in the politics of his art as we enter his exhibition “Unceded Territories,” on at the Museum of Anthropology until October 16. Before seeing Yuxweluptun’s art, we encounter him at the end of the corridor that slopes down past the museum’s Multiversity Galleries and the Bill Reid Rotunda.

Conversely, entering Beau Dick’s “Lalakenis / All Directions: Journey of Truth and Unity” at the Morris and Helen Belkin Art Gallery earlier this year, we passed a seemingly innocuous piece of gallery signage:

LALAKENIS / ALL DIRECTIONS: A JOURNEY OF TRUTH AND UNITY
is an active ceremonial space containing sacred objects and presences.

PLEASE DO NOT TOUCH

NO FOOD OR DRINK

NO BAGS OR BACKPACKS

Both these initial encounters, though contrasting in ways, distill something of the larger exhibitions, tempering expectations and guiding our experience of the work. In their differing loudness and quietness (both auditorily and visually), they make claims and reveal tensions in modes of representation between contemporary art, anthropology, activism and ceremony.

Instead of attempting to contain and tidy the messiness of an exhibition experience that aims to go beyond the white cube, the entrances spell this messiness out on a sign and speak it in video. And though the results may be awkward or uncomfortable at times, both “Lalakenis” and “Unceded Territories” represent significant attempts to not absorb Indigenous epistemologies and ontologies into an existing institutional framework—rather, they seek to bring these registers into direct conversation. 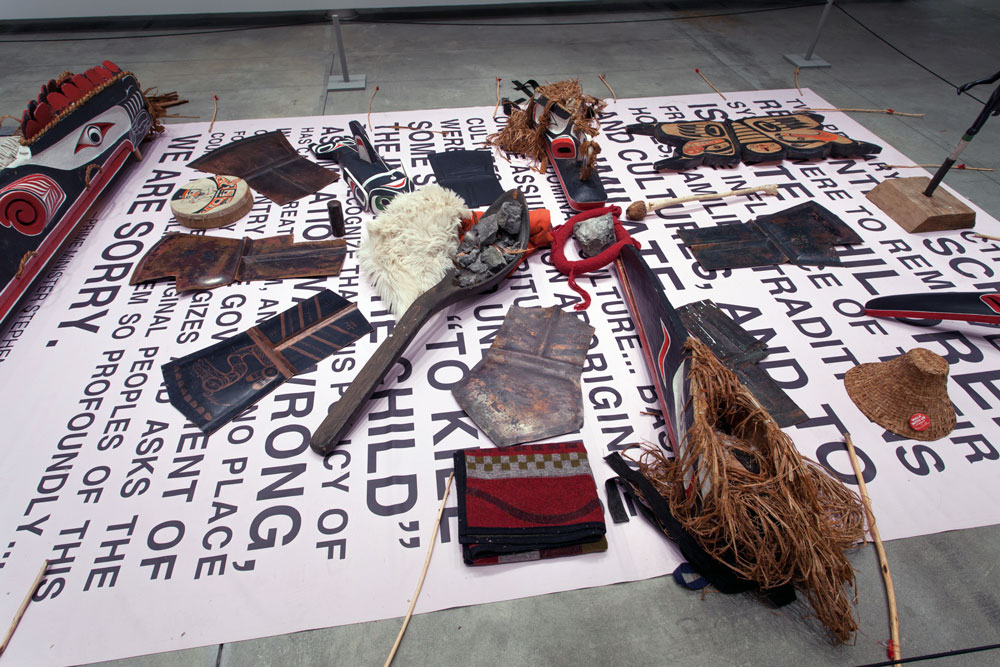 A view of Beau Dick’s exhibition “Lalakenis” at the Belkin Art Gallery. In this part of the exhibition, objects related to a ceremonial journey undertaken by Dick are arrayed on top of pieces of Cathy Busby’s WE ARE SORRY, which reproduces Stephen Harper’s official 2008 apology to survivors of the Indian Residential School system.

In the Audain Gallery, a white-cube space within MOA, “Unceded Territories” surveys more than 30 years of Yuxweluptun’s practice in over 60 works. The majority of these are paintings, large-scale figurative or abstract works. The ovoid—a Northwest Coast design form adapted by the artist, who is of Coast Salish and Okanagan descent—is painted in a hard-edged style over solid colour-fields, or used as anatomical parts in the creation of either human or spirit figures.

There are also significant (if singular) inclusions in “Unceded Territories” of performance art (An Indian Shooting the Indian Act, 1997), mixed-media installation (Residential School Dirty Laundry, 2013) and virtual reality (Inherent Rights, Vision Rights, 1992), along with a wall of drawings and small studies.

Curated by MOA curator Karen Duffek and independent curator and artist Tania Willard of the Secwepemc Nation, “Unceded Territories,” like its closely cropped introductory video, focuses on the figure of the artist.

Didactic panels and vinyl wall texts quote the artist and interpret his claims into familiar categories, like history painting and modernism, as well as his innovations, such as “ovoidism” and “visionism.” Through these terms the artist both critiques and inserts himself into histories of the Northwest Coast and of international art. These aspects of Yuxweluptun’s work are sometimes difficult to tease out from his polemic, though the MOA presentation expands the concept of unceded territories (meaning land was never surrendered, relinquished or handed over in any way) to the artist’s own “personal freedom—within, against, and apart from the legacy of colonization.”

Although MOA certainly inherits the colonial legacy that Yuxweluptun’s work critiques, the institution is also self-reflexive. Its Multiversity Galleries, connected to the Audain Gallery via a short corridor (where we encounter the #RENAMEBC campaign Yuxweluptun created for the exhibition), take significant steps in both collaborating and consulting with First Nations communities in British Columbia to determine how their cultural belongings are to be displayed.

In positioning the artist both within and against the institution, the politics of Yuxweluptun’s art, although loudly proclaimed, become more complex. The voice of the artist, still ringing in our ears, may not map neatly onto our experience of his work. 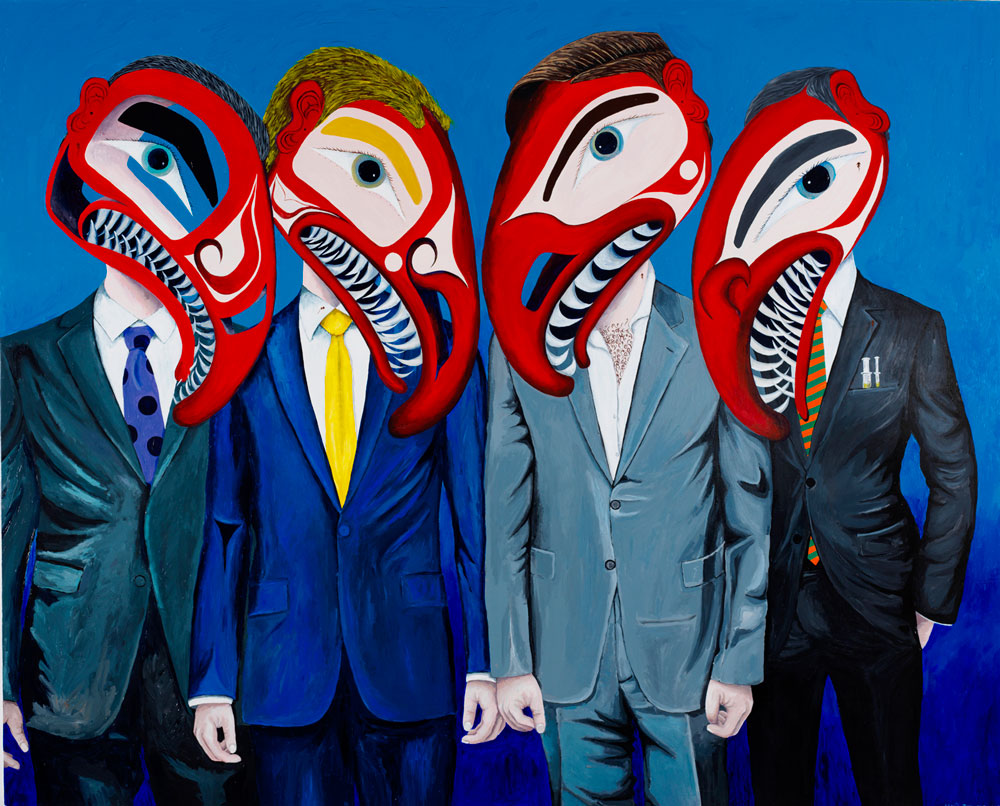 At the Belkin, “Lalakenis” documented—in video, interviews, news segments, ephemera and objects—two journeys undertaken by Dick and others to enact a copper-cutting ceremony.

Such ceremonies are a form of public shaming, where the act of breaking a copper shield signifies the breaking of a relationship and the emergence of new relations. And in the case of “Lalakenis” in particular, the ceremonies were meant to cleave the existing relationship between First Nations and the Canadian government. The history of this relationship contains colonization, forced assimilation, and attempted genocide through the Indian Residential School system and other policies, as well as the exploitation of the environment for capitalist gains. The journey Awalaskenis I travelled from Quatsino on the northern end of Vancouver Island to the Parliament Building in Victoria in February 2013, while Awalaskenis II began at the University of British Columbia and ended on the steps of the Parliament Building in Ottawa in July 2014.

Beyond documentation, the entrance sign’s naming of an “active ceremonial space” signals the temporary conflation of a contemporary art gallery with an Indigenous spiritual practice. The directives to “bring good energy” and the institutional requirements for maintaining the safety and integrity of artworks unite this shifted designation and the gallery’s traditional role of care for objects.

If the gallery was a ceremonial space here—however incongruously—the main room in the exhibition could be conceived of as its altar. A collection of belongings were arranged in the centre of the room, including the coppers broken on both journeys, masks and other carvings, regalia displayed on metal stands, and other items taken on or gifted during the journeys. These were flanked on two walls by ceremonial curtains created for a feast held at UBC prior to the exhibition’s opening, and hung afterwards.

The gallery was thus shown to be a much more flexible space during Dick’s project than convention might suggest. In the procession that opened “Lalakenis,” the objects on the altar were carried into the gallery and were activated in dance and song before being carefully arranged atop pieces of Cathy Busby’s vinyl banner WE ARE SORRY (2008/2013/2015), an edited version of Stephen Harper’s 2008 apology to survivors of the Indian Residential School system on behalf of the Canadian government.

An earlier version of Busby’s WE ARE SORRY was included in the “Witnesses: Art and Canada’s Indian Residential Schools” exhibition at the Belkin in 2013 (which I helped co-curate). Also, during the journeys documented in “Lalakenis,” it became the ground upon which the copper cutting was enacted. From its original installation on the side of a power substation in Melbourne, Australia, in 2009 to its cropping for installation in UBC’s Koerner Library and distribution of the remaining cut squares to university students in 2013, to its movement onto the ground for Awalaskensis II at Parliament Hill in 2014, the work is a powerful symbol of the transmutation occurring within the exhibition at large. 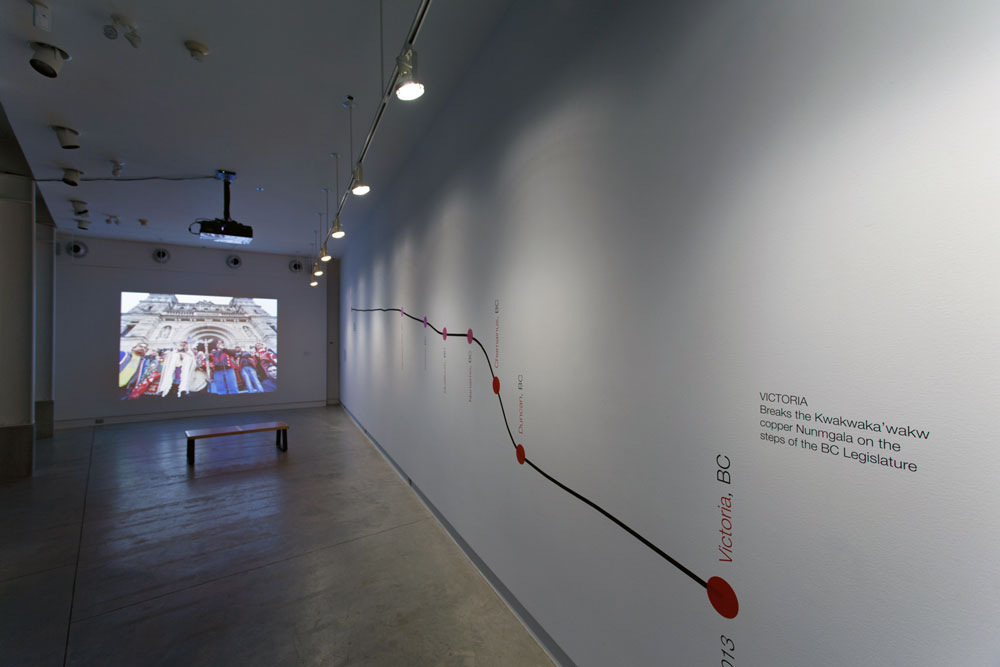 A view of Beau Dick’s exhibition “Lalakenis” at the Belkin Art Gallery. The video and wall map record parts of a journey Dick took to enact a copper-cutting ceremony (a ritual which signals, in part, a breaking of old relations) at government buildings.

In Vancouver right now, we are seeing heightened activity around Indigenous contemporary art. There has been an increase in discursive events (Woodland School: Critical Anthology symposium at Or Gallery, Doing Sovereignties at the Western Front) and more exhibitions and collaborative work between institutions (Intertextual: Art in Dialogue reading group)—as well as a significant amount of discussion happening around the Yuxweluptun and Dick shows. Cutting Copper: Indigenous Resurgent Practices included two days of workshop discussions and performances in conjunction with “Lalakenis,” organized by grunt gallery and the Belkin, and co-curated by myself and Belkin curator of academic programs, Shelly Rosenblum.

In a way, the framing of “Unceded Territories” and “Lalakenis”—two senior male First Nations artists having back-to-back shows on the UBC campus—brackets or reflects the moment we are in right now.

Their exhibitions, and how they are positioned, have gotten people thinking about who is getting major exhibitions, and why, and where. (Why is Yuxweluptun’s exhibition at MOA, for instance, rather than the Vancouver Art Gallery?)

More importantly, perhaps, is the realization that these exhibitions reflect a politics of dealing with the gallery on our own terms as Indigenous artists. This contrasts an earlier drive to recognition, where Indigenous artists fought to be included within institutions (whether the state, the academy or the gallery)—institutions that have often subsumed Indigenous praxis under categories not its own, such as “high art.” And this particular history is one that both Dick and Yuxweluptun knowingly engage with.

Although it is not so cut and dried, the strategies in these two exhibitions also parallel wider movements of Indigenous resurgence—we are in a present moment where First Nations, Inuit and Métis people are no longer simply demanding to be seen, but are engaging with their own cultural practices and ways of governance.

Dick’s exhibition, for instance, takes a cultural, political and ceremonial act of resurgence and presents it in public space, with the gallery becoming a platform to legitimize the act.

Yuxweluptun’s exhibition demonstrates the politics of artistic freedom—here, the artist is making his own rules about how he paints and what he paints. (While drawing, of course, on traditional Coast Salish culture and longhouse teachings.)

Still, while Dick’s and Yuxweluptun’s shows are worth discussing together—and are being discussed together in many Vancouver circles—it’s important not to overdetermine connections between them, or to overdetermine readings of them based on the didactic messages we might encounter first. These are not entrances to a single time and place, or to a journey that only goes from A to B, but to an interconnected and growing sphere of complexity and tension, history and presence.

Tarah Hogue is a curator and writer based in the unceded Coast Salish territories of Vancouver. She is co-curator of #callresponse, a site-specific and performance-based project centering Indigenous women. 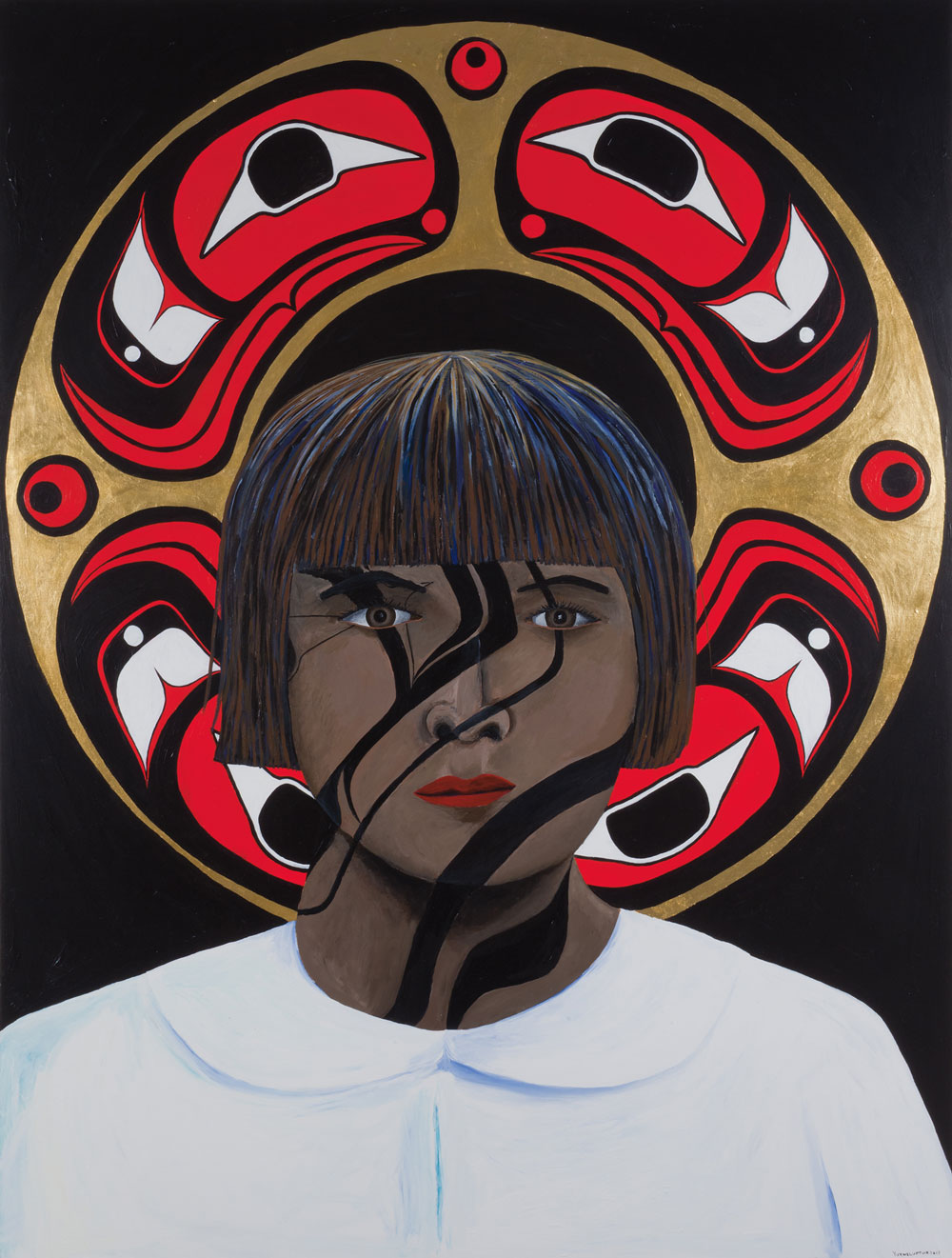