Granville Street in downtown Vancouver, where street hockey and red jerseys break out on a weekend afternoon / photo Danielle Egan 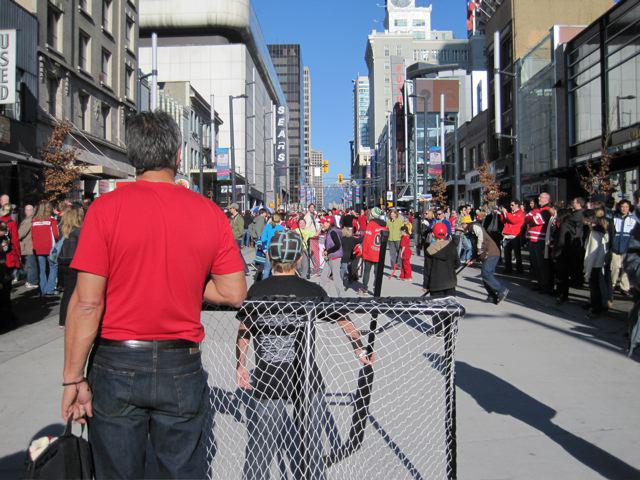 Granville Street in downtown Vancouver, where street hockey and red jerseys break out on a weekend afternoon / photo Danielle Egan

“Let’s get some culture,” says a man corralling three kids wearing the ubiquitous red Canada jerseys and toques through the doors of the Vancouver Art Gallery. The lineups here (cover-free during the games) rival the hottest international houses and behemoth corporate party tents, all of which star beer. Leonardo da Vinci is the headliner here, but lots of people are enjoying the works of BC artists and even the speed-walkers brake for Brian Jungen’s Cetology which is always a pleasure to view suspended in its large space, so that you can walk beneath the whale’s belly.

The Contemporary Art Gallery makes sport of the group show theme with “An Invitation to An Infiltration,” a sort of art-world equivalent to Olympic ski cross. It encourages local and international artists to jostle for position, one-upping each other by altering their own pieces and physically disrupting the gallery space for the show’s duration. I’ve always wondered how much heated competitive rivalry exists among artists, but these creatives have primarily challenged institutional gatekeeping. Local Jonathan Middleton made use of his home-turf advantage to hijack the show’s official title and signage, changing it to “Strange. The first time I’ve heard of a piano with four legs. (Hey, I keep falling down!)” It’s a subversive nod to the questionable nature of artistic agency, borrowed from an episode of The Goon Show in which a bunch of Brits are hired to move a piano, but the fine print of the contract reveals it’s Napoleon’s piano and the pay is a measly five pounds.

Holly Ward’s Operation Podium, made of Pepsi cases, tackles the precarious nature of sponsorship, generating pre-show wrangling with VANOC (Coke is an Olympics sponsor and the organization had to approve all facets of the gallery’s promotions) and Berlin-based duo Hadley + Maxwell returned home to crash the CAG after hours and video a performance that continues their analysis of the incestuous relationship between artists and power brokers. Hadley, dressed as an ancien régime art critic obsessed by the reflection in a gilded hand mirror, grows increasingly agitated by the works and unleashes fury on the art by throwing around Ward’s pop cans and stomping on Middleton’s take-home posters. Eventually the critic pops a Viagra, drops trou and, with Maxwell acting as body double, gains literal penetration of the art.

In this hyper-stimulated environment, the lines between reality and fantasy, personal and public, have blurred together. It’s a treat to experience Janet Cardiff and George Bures Miller’s masterful ruminations on these themes in the flesh with The Paradise Institute, currently on view at Emily Carr University of Art and Design. After 12 minutes with the piece, you exit its mini theatre feeling just like the film’s stalked protagonists. Meanwhile, we are being watched on campus by Code.lab’s students and recent grads, who have created their own surveillance experiments including Dennis Rosenfeld’s (in)security camera, which startles whenever its sensor detects movement, spinning round and dropping its gaze to the wall.

Sensory overload has me reeling to another lineup at the Candahar Bar hideaway, a mock-up of an Irish pub tucked inside Playwrights Theatre. With its stellar lineup of performers, including Rebecca Belmore, Rodney Graham Band and Althea Thauberger, this is the ideal place to cheer, cowbell and show the love for homegrown art talent. First up tonight is Skeena Reece, priming the crowd with free inoculations against colonialism. Then Brady Cranfield and Kathy Slade, (whose short film Tugboat is showing at CUE, the VAG’s outdoor experimental film show) hit the stage to crank out an homage to punk rebellion with 10 Riot Songs.

“I’ve never screamed ‘Fuck you’ and ‘Suck my dick,’ before,” says Slade of their choice of punk, which came on the heels of an upbeat pop cover album called 12 Sun Songs.

“But we’re upset about the massive government cuts and of course it’s related to this Olympics party, so we wanted to share something cathartic with Vancouver.” Maybe I’ve caught a virulent strain of Olympiad art fever, but suddenly I feel the need to try out experimental filmmaking and mine the raucous collective spirit before it fades away.

Danielle Egan is a Vancouver-based freelance journalist with an interest in art, technology and bioscience. She is a contributing editor for Vancouver Magazine and The Tyee and has written for many publications including New Scientist, the Globe & Mail, the San Francisco Chronicle, Seed, Alternet, This Magazine, Jane, Adbusters and Salon. She also writes fiction and has published short stories in Taddle Creek, Vancouver Review, Maisonneuve and Kiss Machine.