Changing What Video Art Can Be 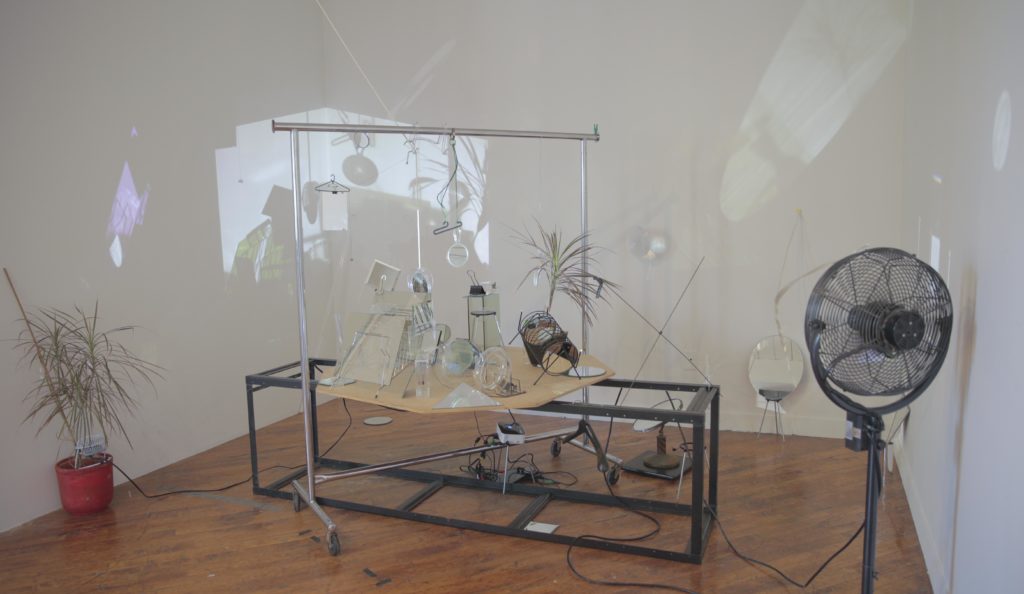 “The first shot opens on an empty factory floor. It is dimly lit by lamps above separate workstations. In the right side of the frame, a shadow moves across the space, over tables and machines. The shadow comes from a doorway.”

So begins the screenplay for Montreal artist Jordan Loeppky-Kolesnik’s television drama/installation, Oysters (2014), part of the group exhibition “Sculptural Video,” currently on view at Trinity Square Video. Loeppky-Kolesnik’s script (available in the gallery) moves from factory floor to luxury hotel room to lounge bar to dockside, tracking the arrival of an omnipresent, and possibly infectious, white-glowing entity—a stand-in, it turns out, for psychoanalyst Wilhelm Reich’s hypothetical life-force, Orgone. A stage-set array of props—a low-hanging lamp, an oversized cocktail glass, a tarp-wrapped form on a shipping pallet—all infused in white creates a mise en scène of sorts in the gallery. It’s an intriguing sculptural-theatrical hybrid, a test of the co-dependent limits of words and objects that ultimately hinges on the life-force of the viewer’s imagination.

Indeed, all of the works in “Sculptural Video” seem to fall into this intriguing-yet-experimental range, which makes sense, in a way, as the exhibition is the latest in TSV’s ongoing series of themed artist commissions and residencies “exploring the multiple dimensions of video in contemporary artistic practices.” As exhibition organizer John G. Hampton writes in the gallery press release: “The works produced for Sculptural Video analogously travel through multiple levels of engagement/disengagement with the screen, providing a spectrum of surrealist conjurings that fluidly move between flatness and immersion, stillness and temporality, and narrative and dispersion.”

In the front gallery, artist collective Terrarea (comprised of Emily Hogg, Janis Demkiw and Olia Mishchenko) present Office Space Modulator (2014), an installation that assembles mirrors, plastic magnifying lenses, potted plants, miniature figurines and other bric-a-brac gathered from the gallery onto and around a octagon-shaped Lazy Susan. Animated by fans and spotlights, shadowed forms and reflected-light prisms from the table arrangement are projected onto the gallery wall in a whirling abstraction of the quotidian world.

Standing nearby, Liana Schmidt’s Supernatural (2014) displays a looped video of a revolving sculptural maquette designed as part sci-fi monolith and part shopping-mall planter. Built from foamcore—though looking very much like a CGI creation—Schmidt’s model purposefully calls out the old-school/new-school tectonics of contemporary sculptural practice. At the same time, Schmidt likens the work’s human-scaled sculptural structure to a “mobile information kiosk” that offers a friendly confrontation with the formal and often insidious constructs of commercial space and visual display.

And, next to Loeppky-Kolesnik’s Oysters, Montreal artist Alex M. Lee’s Lucid Dreaming (2014) is a double-sided video that displays front-and-back views of a virtual Sigmund Freud. Set against surreal backdrops of rolling oceans, blowing desert sands and deep-space skies, the Freud avatar reads from E.T.A. Hoffmann’s proto-surrealist story Der Sandmann, specifically passages focused on the character Olympia, who/which is revealed to be an automaton. As he reads, the Freud avatar slowly crumples into a pulsing mass of wool tweed, only to reform again and start anew.

“Sculptural Video” is cleverly composed and curated. There’s a smart commingling effect that ebbs and flows across works in the show, from Terrarea and Schmidt’s low-fi constructs to Loeppky-Kolesnik and Lee’s narrative prompts. Immersive shadow play connects the pieces by Terrarea and Brown, just as material and display concerns link Schmidt’s project to Lee’s.

In the end, these artworks—the result of month-long in-situ summer residencies at TSV—win viewers over not with a sense of perfection and polish, but rather a mood of process and progress. There’s something oddly satisfying in the experimental energies, and unexpected dialogues, that are revealed throughout.