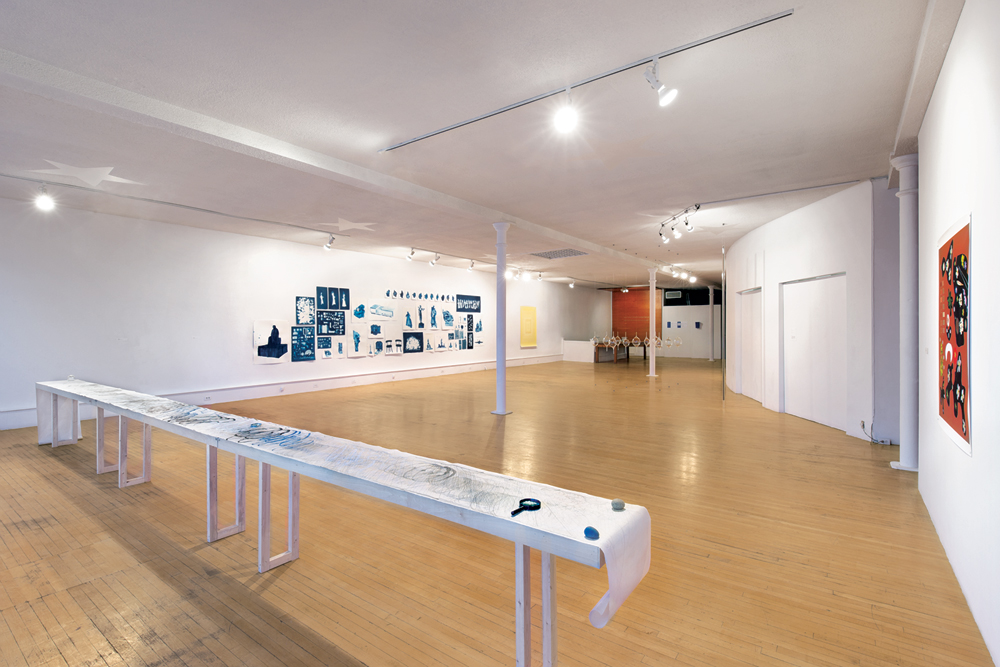 As Japanese author Haruki Murakami has written: “Body cells replace themselves every month. Even at this very moment…Most everything you think you know about me is nothing more than memories.” Individual memories form the basis of many of the works in this four-person exhibition, but collective memory activates them, amplifying their resonance.

Dagmar Dahle’s reflections on memorializing in Berlin are filtered through her heritage as the child of German immigrants. Seven small, luscious acrylics dissolve and reconfigure the Brandenburg Gate, invoking its mutable heritage. A wall of watercolours in Prussian blue invokes the pigment’s history: discovered in Berlin, used in cyanotypes, it is also a residue of the poison used in Nazi gas chambers. Dahle juxtaposes Berlin monuments with cyanotypes of her grandmother’s diary from the Battle of Berlin and the artist’s childhood German toys in this seductive pigment. Her wall records the clash of personal memory with collective memorial, the process of remembering that is also forgetting.

David Miller’s large-format photographs refract a similar impulse. Thirteen Days in May (2014) is a meditation on loss and the incommensurability of grief more generally. A radiating series of yellow rectangles seems to expand from a central Post-it note that is represented to scale, as faithfully as possible. This small core has just the faintest of visible markings. It is enlarged and repeated, until it is bigger than the body, where it reads simultaneously as a contraction and an expansion around the viewer.

This sense of expansion is echoed in Mary Kavanagh’s suspended glass vessels that contain individual breaths. These intensely personal expressions of unique—yet universal—experiences are juxtaposed with a floor-to-ceiling glass tube filled with ash residue from the hangar that housed the Enola Gay. This traverse of personal and collective reminds us of the dangers of forgetting. The fragile breath vessels reveal the body as permeable, the breath as an interface that connects us to the nuclear fallout encircling our planet. The works draw our attention to things so essential that they are easily forgotten.

As with Kavanagh’s breath, poised for our contemplation, Annie Martin’s frieze-like drawing solar/scroll/score (2014) explores the nature of our perception. It traces the movement of light across the artist’s page in hourly increments through a season. Martin is interested in how the drawing parallels the creative act of the viewer, revealing perception itself as an act of narration or translation to the self of what is fast becoming memory. Visually, Martin’s scroll seems most like text, and the poetic evocation accompanying the exhibition by Erín Moure is an apt condensation of the exhibition’s themes.

These works reveal a distrust of the official memorial, and they reach toward the embodied experience of memory, making it visceral, personal and universal. Their collective focus on attention, memorializing and forgetting reveals how complex memory is. Located in the body, in experience, shaped by the personal, the familial and the cultural, memory is the root of who we are and who we will allow ourselves to become.