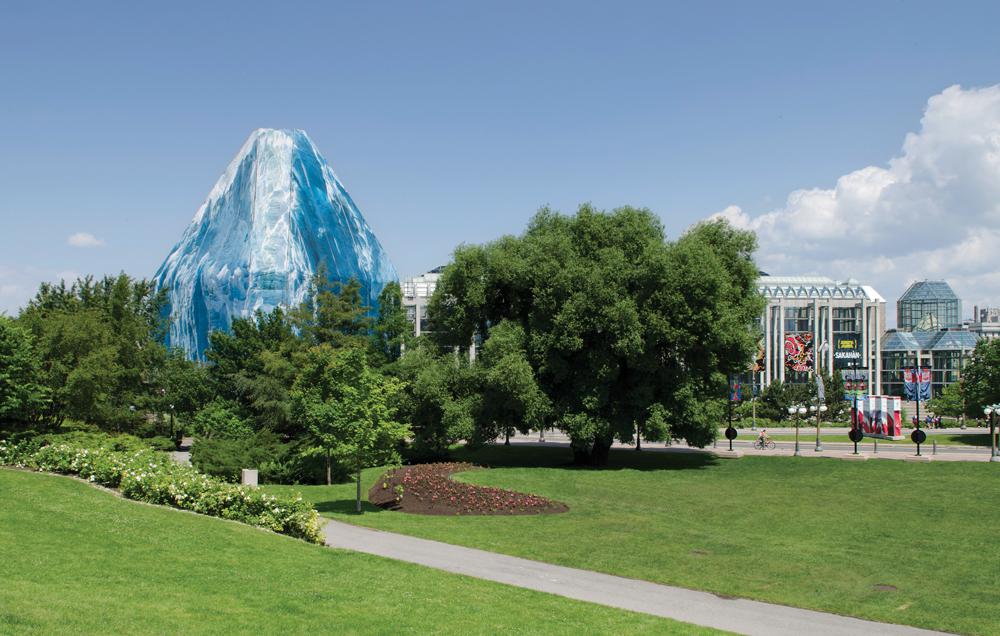 Iluliaq (2013), by Greenlander artist Inuk Silis Høegh, makes a perfect metaphor for “Sakahàn,” the first edition of the National Gallery of Canada’s planned series of exhibitions of international Indigenous art that will happen every five years. Installed on a tower of scaffolding and accompanied by a soundtrack of melting and cracking ice, the 56-panel photomontage effectively transforms the exterior of the gallery’s iconic Great Hall into a looming, 48.5-metre-high iceberg. Climate change comes to mind as a reference point, as does the glacial pace of change within the institutional frameworks of art and politics, especially on Parliament Hill, which is just a stone’s throw from the gallery.

This is just the tip of the iceberg, though. What makes Iluliaq a keynote is not only its superstructure, but also the suggestion of a critical mass submerged just below the visible surface. There’s been a notable shift in contemporary Indigenous art in Canada over the past decade, as a new generation of artists and curators moves from the margins of an “official” cultural narrative to now challenge the status quo of history and identity. The rise of those questioning voices and the surfacing of international connections between this new wave of Indigenous artists at home and abroad is what “Sakahàn” was all about.

Billed as “the largest-ever global survey of contemporary Indigenous art,” the show amassed more than 150 works by more than 80 artists from 16 different countries. It was an exhibition that covered a lot of ground, crossing continents, media and historical and cultural time frames. To their credit, curators Greg Hill, Christine Lalonde and Candice Hopkins avoided an encyclopedic mapping of artists, opting instead for a subtly paced interplay of material and conceptual approaches within global and local contexts that was more contemplative than comprehensive.

Various thematic pathways emerged as works in the show moved between emotive impacts and critical meanings. Kent Monkman’s bawdy, teepee-salon take on the wild west, New Zealand–based artist Shigeyuki Kihara’s photos of reclining hermaphrodites and Alaskan photographer Da-ka-xeen Mehner’s self-portraits, mirrored by archival photos of a Tlingit elder, pivoted on a delicate balance of humour and pathos that raised past and present questions of identity.

Ideas of traditional knowledge lost and recovered resounded in memory drawings of seasonal changes in the Amazon rainforest by Colombian artist Abel Rodríguez and in large-scale photos of museological life-casts of Maori chiefs by New Zealand artist Fiona Pardington, as well as in ethereal video-sculptural installations by New Zealand artists Brett Graham and Rachael Rakena and Yukon artist Doug Smarch.

Other works were more confrontational. Australian artist Vernon Ah Kee presented an installation that included shotgun-blasted surfboards (one of them wrapped in barbed wire) set to the pulse of a heavy-metal video soundtrack. Rebecca Belmore offered a light-box photo of a deep-set, bead-stitched scar that runs the length of a reclining woman’s back. And in a video by Greenlander artist Pia Arke, the naked artist flails around her studio in a fit of “arctic hysteria.” All delivered hard-hitting takes on the traumas of a lingering colonial legacy.

In the Algonquin language, “sakahàn” is a verb that translates as “to light a fire,” and with the Idle No More movement of last winter still fresh in many minds, and with the exhibition’s presence at the country’s preeminent art institution, some may have expected the show to take a more overtly radical position against the dominant hierarchies of Indigenous art. What was delivered instead was something more complex. It was a show where many of the works carried an inherent sense of urgency. Interconnections between histories, unresolved struggles for identity and the increasing prominence of Indigenous artists within global contemporary art channelled a multifaceted approach that offered no neat answers, except one—that contemporary Indigenous art is a rising force to be reckoned with.

This is a review from the Fall 2013 issue of Canadian Art. To read more from this issue, visit its table of contents.