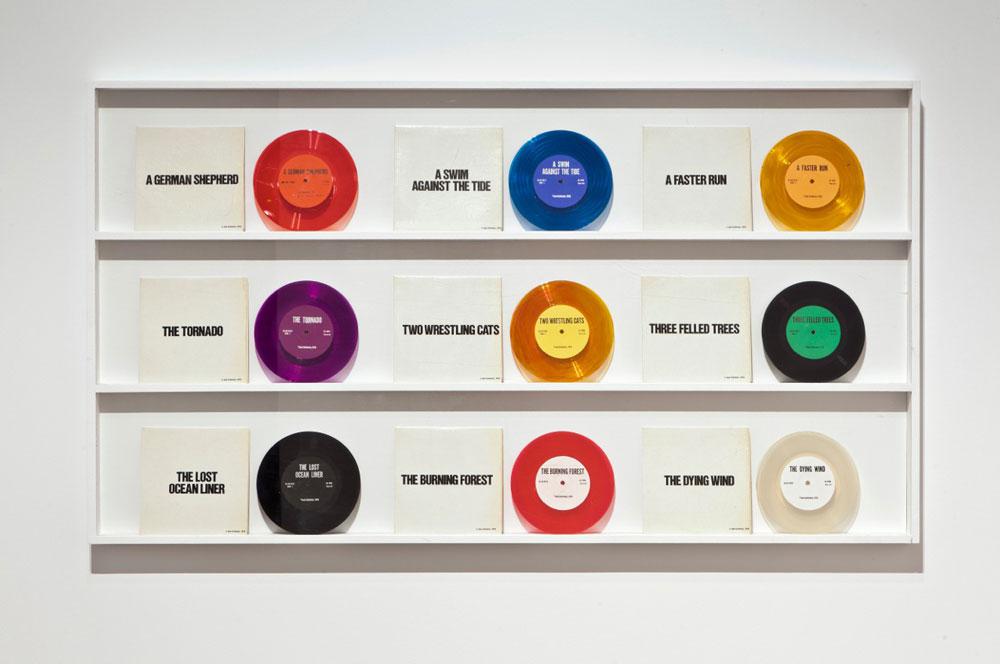 Mercer Union’s current group show “Red Sky at Night” is all about atmosphere. It’s a timely theme, as early summer temperatures in Toronto continue to push past 30 degrees; the daily heat and smog advisories indicate an environmental extreme that might best be described as oppressive. Whether you’re a sun worshipper or a shade seeker, this amped-up climate of sweaty brows and frayed nerves is a constant—it’s an atmosphere that you can really feel.

The causes and effects of atmospheric qualities play an important part, too, in curator Sarah Robayo Sheridan’s premise for “Red Sky at Night.” Borrowing its title from the age-old maritime observation “Red sky at night, sailor’s delight; Red sky at morning, sailor’s warning,” the show gathers works by nine international artists to take a conceptual measure of climates both elemental and psychological. Indeed, you might think of the exhibition as a kind of microenvironment where clever curatorial connections abound.

That chromatic coding continues in Jack Goldstein’s 1976 series A suite of nine 7-inch records with sound effects, where sounds of “The Tornado,” “A Swim Against the Tide” and “The Dying Wind,” among other nature-based phenomena, are etched on vinyl in colours that correspond to the actions recorded; it comes across as a kind of readymade, though pointedly inert, soundtrack to the lived world.Take, for instance, Bruce Nauman’s 1970 bookwork LAAIR, which renders the sickly hues of Los Angeles air pollution as a sequence of colour-saturated monochrome pages.

That Goldstein’s work is, in effect, a kind of anti-environment is made clear in Jonathan Monk’s 2003 piece The Silent Tornado (for Jack Goldstein), which appropriates an element from Goldstein’s nature suite for a silent 16mm projection.

Absalon’s 1990 video/performance work Proposition d’habitationdepicts a figure in an all-white enclosed space silently interacting with various geometric structures—he lies on one, stands in another and straddles yet another—a dystopic precursor to the artist’s famously unrealized cellules project, which in its ultimate form would have involved him living in self-designed solo habitats spread around the globe.

By contrast, Berndnaut Smilde’s 2012 photo work Nimbus D’Aspremontproposes to populate space with clouds that would slowly dissipate into the ether, while Heike Baranowsky’s 2011 projection Barometer (1)shows a low-pressure training facility in the former East Germany filled with weather balloons. Like ghosts slowly drifting on an historical echo, these free-floating balloons and the expansive institutional space they inhabit draw viewers back to the claustrophobic confines and psycho-geometries of Absalon’s Proposition.

Yet while Robayo Sheridan has made an ambitious selection of works, and while the multitude of criss-crossing comparisons, dovetailings and juxtapositions add up to a tight curatorial conceit, “Red Sky at Night” lacks atmosphere and it lacks extremes—in short, it lacks feeling. It’s rigorous but rigid. Nothing is upset, everything is in order, but it feels lifeless. There are no variables and no mystery. A sense of cool calculation permeates the gallery, and the show seems static and overdetermined for it. Many of the works are dependent on the accompanying didactic panels. It’s as if you’re being shown a lesson, not experiencing a discovery.

When I was in the gallery, a fly was sitting at the corner of one of Massey’s photos and, though it might seem trite, I kind of wished its presence was intentional. Logistical constraints noted, I also had the thought that it might have been more interesting to actually have Smilde’s clouds puffing into the gallery space rather than trapped in a photo on the wall. I wondered if a large-scale projection of Absalon’sProposition might have made better use of the back gallery than Baranowsky’s fascinating, though mind-numbingly long, Barometer (1).

There was, however, one work that redeemed the exhibition for me. In their 2000 video work Inventory of small deaths (blow), Cao Guimarãesand Rivane Neuenschwander track the meandering journey of large soap bubbles floating across a tropical Brazilian landscape. Originally shot in black and white on Super-8 film, the work, which is projected in the gallery, has a grainy, phantasmagoric effect. At times speeding across the landscape, at others lazily floating up and away in front of stormy skies, these bubbles seem almost alive as they shift and morph in response to wind currents. Yet they are also microcosms trapped in space and time, biomorphic forms that are at once transparent, reflective and distorting. There was an obvious unpredictability for the artists as to what would happen next, and you feel that when you watch the video. It is an instance of the spontaneous magic that can happen if you relinquish expectation and forsake our human tendency to try to control our environments—and instead give in to the infinite unpredictability of existence.

This article was corrected on July 5 and 6, 2012. The original text stated that the 1991 video Propositions d’habitation showed Absalon himself. The video is from 1990, is titled Proposition d’habitation, and the figure in the video is a stand-in.