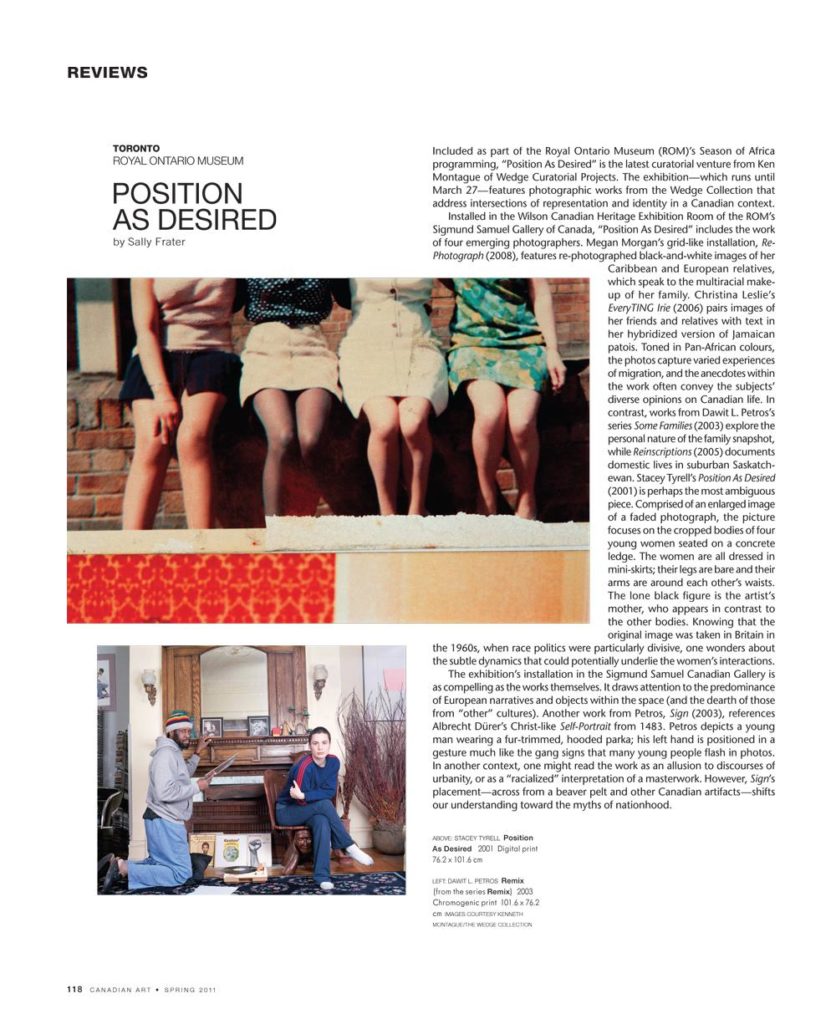 Spread from the Spring 2011 issue of Canadian Art

Included as part of the Royal Ontario Museum (ROM)’s Season of Africa programming, “Position As Desired” is the latest curatorial venture from Ken Montague of Wedge Curatorial Projects. The exhibition—which runs until March 27—features photographic works from the Wedge Collection that address intersections of representation and identity in a Canadian context.

Installed in the Wilson Canadian Heritage Exhibition Room of the ROM’s Sigmund Samuel Gallery of Canada, “Position As Desired” includes the work of four emerging photographers. Megan Morgan’s grid-like installation, Re-Photograph (2008), features re-photographed black-and-white images of her Caribbean and European relatives, which speak to the multiracial makeup of her family. Christina Leslie’s EveryTING Irie (2006) pairs images of her friends and relatives with text in her hybridized version of Jamaican patois. Toned in Pan-African colours, the photos capture varied experiences of migration, and the anecdotes within the work often convey the subjects’ diverse opinions on Canadian life. In contrast, works from Dawit L. Petros’s series Some Families (2003) explore the personal nature of the family snapshot, while Reinscriptions (2005) documents domestic lives in suburban Saskatchewan. Stacey Tyrell’s Position As Desired (2001) is perhaps the most ambiguous piece. Comprised of an enlarged image of a faded photograph, the picture focuses on the cropped bodies of four young women seated on a concrete ledge. The women are all dressed in mini-skirts; their legs are bare and their arms are around each other’s waists. The lone black figure is the artist’s mother, who appears in contrast to the other bodies. Knowing that the original image was taken in Britain in the 1960s, when race politics were particularly divisive, one wonders about the subtle dynamics that could potentially underlie the women’s interactions.

The exhibition’s installation in the Sigmund Samuel Canadian Gallery is as compelling as the works themselves. It draws attention to the predominance of European narratives and objects within the space (and the dearth of those from “other” cultures). Another work from Petros, Sign (2003), references Albrecht Dürer’s Christ-like Self-Portrait from 1483. Petros depicts a young man wearing a fur-trimmed, hooded parka; his left hand is positioned in a gesture much like the gang signs that many young people flash in photos. In another context, one might read the work as an allusion to discourses of urbanity, or as a “racialized” interpretation of a masterwork. However, Sign’s placement—across from a beaver pelt and other Canadian artifacts—shifts our understanding toward the myths of nationhood.

Sally Frater is the curator of contemporary art at the Art Gallery of Guelph. She is interested in issues of place, memory and body in her curatorial practice.