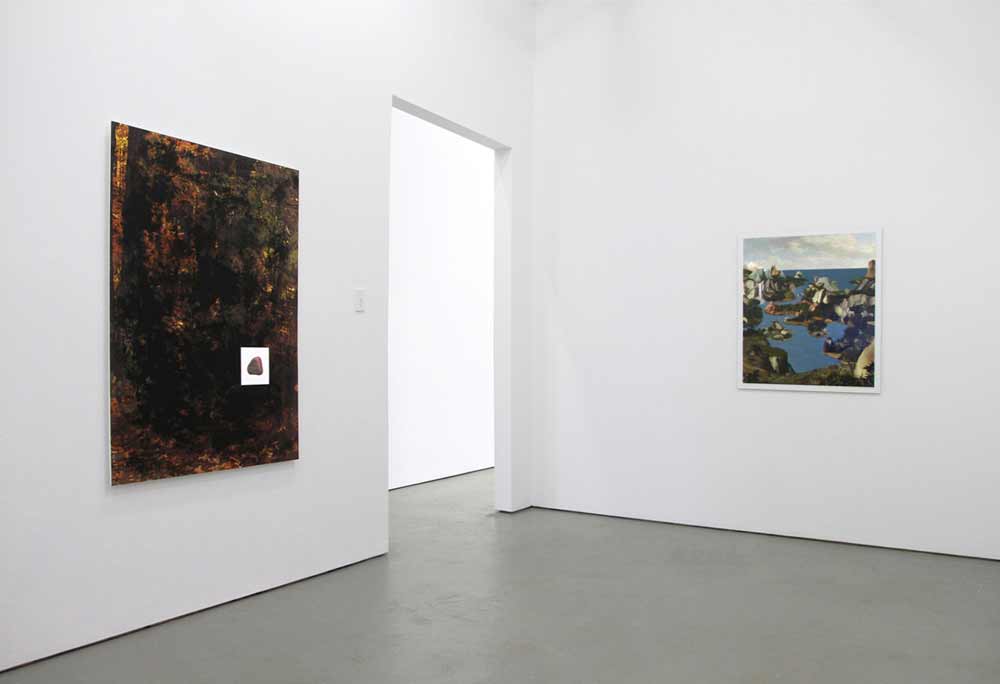 Sara Magenheimer, Floating like the moans the plants (left), and James Kerr, Do you Landscape? (right), 2015. Courtesy Galerie Antoine Ertaskiran.

Is cynicism seasonal? Even the darkest, most deadpan works in Galerie Antoine Ertaskiran’s summer group show, “Playlist,” feel light—surmountable. The show brings together five young Canadian and American artists whose striking works aestheticize the everyday, plumb the depths of the Internet and parody recognizable forms.

Two recent prints and an installation by Montreal-based, Sobey Art Award–nominated Jon Rafman occupy the first quarter of the space. The prints ruminate on ruins. In You Are Standing in an Open Field (Tower), Rafman has overlaid reproductions of Romantic landscape paintings with gamer detritus: a computer keyboard thickly encrusted with grime, hair and cheese dust; chewed wads of bubble gum; a toothbrush; a crushed Mountain Dew can; plastic bags; and a Pikachu clock, all in what might be called an artificially sweetened palette.

You Are Standing in an Open Field (Arctic) is an even denser garbage vista featuring exaggeratedly feminized debris: hairbrushes, bangles, lotions, scented candles, dried flowers, pink slippers, gaudy lamps and two half-empty bottles of depanneur wine. The specificity is endearing (I’ve seen many bedroom dresser surfaces like this) but Rafman’s anthropological gaze renders the objects cold. They pose stiffly in front of a blushing arctic landscape, the warmth of use long evaporated. Both prints have been subjected to cum-like ejaculations of clear resin, which form glossy pools and a crispy, spilled film around the prints’ edges. These are gratuitous, detracting from Rafman’s proposition that there might be something beautiful and tender about lonely gamer caves.

Toronto-based Roula Partheniou reduces familiar objects—cigarettes, ping-pong balls, sticky notes—to essential forms and constructs near-replicas using simple materials and clean, opaque hues. The strategy is duplication without replication. Grounding clues like logos, standard dimensions and classic colour schemes have been removed and replaced by subtle distortions. A sculpture in the shape of a cigarette box is four times the standard size; a kitchen sponge mounted to the wall is painted the recognizable mix of green and yellow but is abnormally rigid. Partheniou’s black pigment is bottomless, absorbent like velvet and ideal for playing with depth perception. Similar to Thomas Demand’s precise paper facsimiles, Partheniou’s sculptures provide an experience of false identification, existing only to signify.

Michael Assiff’s Vents series also borrows from the visual language of mass-produced industrial materials. Three unassuming aluminum vents are installed low to the ground throughout the gallery, printed over with text and images from dismal Google news searches and emails. Vent (Polar bears are starving) is a slitted surface overlaid with a cautionary email from a Greenpeace representative, turning a cynical eye on our present culture of hyperaccumulation, commodity kitsch and environmental failure.

Montreal-based James Kerr, better-known as Scorpion Dagger, makes GIFs of early Renaissance imagery infused with warped surprises. Do You Landscape? is one of his recent experiments in bringing the GIF into the gallery—a digital collage requiring the use of an augmented-reality app in order to access the unexpected bits. With a quick scan of the landscape on your phone, you see a crucified Christ on a hilltop starting to wriggle limply in the wind like an orange inflatable dancing figure from a used-car lot.

Sara Magenheimer’s video The Rhythm of Plain White shares the organizational logic of Camille Henrot’s Grosse Fatigue. Set against a white background, a rotating cast of objects is manipulated, stretched or held in the purple palm of a rubber-gloved hand, while sound effects and music articulate their qualities. A tubular yellow blob pulses and whispers “shhh, shhh,” while the video’s default sound is a high-pitched “whirrrrr,” like wind in empty glasses, or a crack between two fully formed thoughts—a transitional sound, as in movie flashbacks or dream sequences. Similar to Kerr, religion and kitsch come together in Magenheimer’s choice of props; a bargain bin T-shirt with “GOD” written across the chest hangs on a mannequin. Evidently it is possible to drape fabric sarcastically.

“Playlist” is emotionally muted. Is this what the Internet is supposed to feel like? Walking through the show is like scrolling. Such deadening of sentimentality is reflective of a broader trend in post-Internet art toward cool detachment as the prevailing online affect. But this is not a new thing. Critic Moira Roth labelled the “The Aesthetic of Indifference” in a 1977 essay about the paucity of commitment (emotionally, politically) in 1960s Pop art and Minimalism. Despite the era’s radicalism, such art was “characterized by tones of neutrality, passivity, irony and, often, negation.” In this sense, “Playlist” raises an ongoing debate about art and numbness—how is the attitude of this work specific to our present cultural moment? Perhaps cynicism isn’t seasonal after all; its sting has just been softened by contemporary indifference.