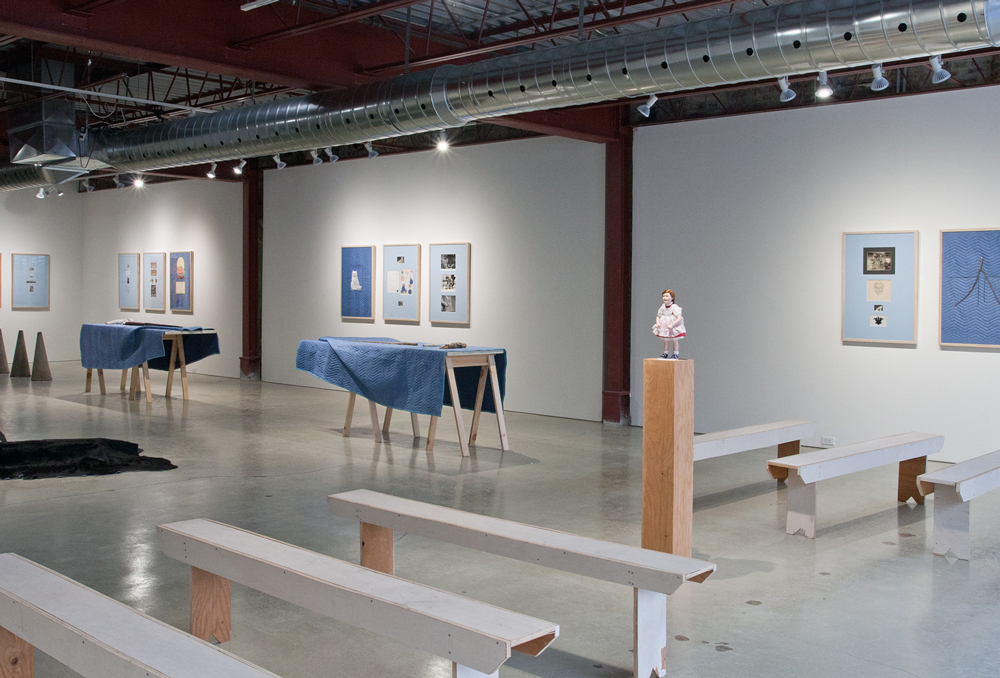 A surprising elegance and curious succinctness pervaded the recent Parker Branch exhibition, “Has Things In Common,” at DNA Artspace in London, Ontario. The show’s distilled character was surprising, considering that Parker Branch’s brand relies on assembling arcana from thrift stores, flea markets and artist’s storage lockers to assert cheeky connections among choice bits of cultural detritus. It seems unexpected that such “bricologic” included restraint among its values, yet the exhibition forged some concise linguistic links and aesthetic connections amongst the junk. It was also punctuated with abstract arrangements that made seemingly anachronistic reference to Modernist sculptures. A totem of salt-lick blocks, and a layout of benches that casually mimic upturned Donald Judd works, suggest that the exhibitors haven’t fully given up on making, or thinking about making, as part of their modus operandi. Instead, the show highlighted similarities between the curatorial gesture of arranging objects in museum displays and the artistic act of assembling materials as installations and sculptures (despite their historically determined differences).

Parker Branch is the collaborative project of London artists Anna Madelska and Jason Hallows, which relies on the hybrid energy generated by combining a curatorial impulse with a studio practice. Parker Branch’s work is normally found in a small storefront space on Stanley Street, an avenue known as both a storied and “no-account” thoroughfare located just west of London’s downtown. Somehow, Stanley Street’s dual identity seems fitting for the “high/low” contradictions Parker Branch typically trades upon.

Over the admirably sustained period of its operation, more than seven years, Parker Branch has mounted 30 on-site exhibitions, and a handful of off-site projects. Following that long string of shows, “Has Things In Common” acted as something of a survey. But, true to form, previous works were presented so that earlier alliances were reprised, while new affinities gained traction. In this spatial omnibus, the language of Parker Branch was parsed anew such that a particularly astute ear, or sometimes a keen translator, was needed. Happily, though, where campiness could have prevailed, strangeness, mystery and a conciseness regarding the “gesture” of the exhibition triumphed—encouraging viewers to puzzle through.

One cannot help but think of Surrealist-inspired automatism, not to mention the readymade, on encountering “Has Things In Common.” In the framed work Bethel Lodge, for example, the unlikely conjunction of a page of spirograph doodles, a sheet of paper bearing just the name “Bethel Lodge” in ballpoint cursive, a photo of a serene family grouping with one member sliced out, and a picture of a pair of cats with their eyes cut away, has seemingly little in common. The awkwardly cut hole in each section sets up something of a logical “category” that could relate the elements, but it feels a bit slight to suggest that this is the rationale for the connections. One also hesitates before overemphasizing the Old Testament associations with the word “Bethel.”

We are cast adrift amid Surrealist game playing, historical (and even biblical) rationalization and postmodern irony. Or are we? Perhaps, instead, “Has Things In Common” located us within the short history between avant-garde cultural provocation and Internet promiscuity. Rather than focusing on the negation of rational meaning the Surrealists propounded, or on the possible arbitrariness that cybersurfing promotes, Parker Branch offered an allegory of contemporary cultural-meaning production. Neither fully devoid of “truths,” nor wryly “knowing” in its claims, this information bank immersed us in both a poetics of history rife with uncertainty and the dialectics of the dime store to conjure a familiar space of ennui.

“Has Things In Common” was charmingly disjointed, but nevertheless delivered viewers into a world capable of invoking, among other things, social frameworks and labyrinthine places such as art communities. In a striking triangulation involving a photograph of a brooding nineteenth-century dame, an upright porcelain doll with a hysterical grin and an electric fan that mesmerizes viewers with its moiré-patterned cage, there was a palpable sense that a living energy was being portrayed among the not-so-animate objects. Here, Parker Branch surmounted the limits of archiving and the banalities of “curating” to capture the exhilarating anxiety that an absurdly arranged group of objects occasionally manages: the sense that they have always existed as such.