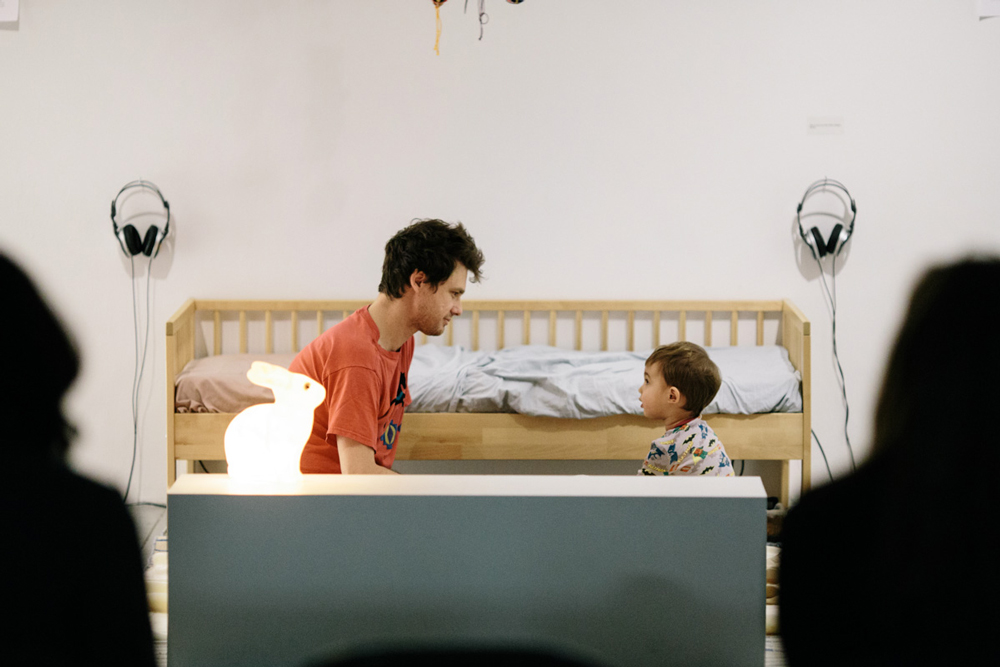 A child's bedtime routine becomes performance art in Dillon and Peregrin de Give's piece By My Own Admission at EFA Project Space in New York. Photo: Ramsay de Give.

Posters by Home Affairs read "Does Your Gallery, Museum, Conference Center or Festival provide Child Care?" at the exhibition "The Let Down Reflex."

Shane Aslan Selzer's video projection Horizonlines: Gowanus reflects the isolation experienced by many new parents. For it, Selzer frames the view from her Brooklyn window as she interacts with her child, adding collages of lighting gels to the Manhattan skyline in the process.

Lise Hiller Baggesen's installation Mothernism calls on viewers to "PUT THE MOM IN MOMA," among other maternally centred propositions.

Lyrics for "The Wages Due Song," a 1970s composition that artist Jacqueline Hoa Nguyen found in the archives of Toronto's Wages Due Collective. With her partner Thunder Tillman, Nguyen created new music for the activist song calling for compensation of women's unpaid labour and re-presented it at "The Let Down Reflex."

A child's bedtime routine becomes performance art in Dillon and Peregrin de Give's piece By My Own Admission at EFA Project Space in New York. Photo: Ramsay de Give.
Posters by Home Affairs read "Does Your Gallery, Museum, Conference Center or Festival provide Child Care?" at the exhibition "The Let Down Reflex."
Shane Aslan Selzer's video projection Horizonlines: Gowanus reflects the isolation experienced by many new parents. For it, Selzer frames the view from her Brooklyn window as she interacts with her child, adding collages of lighting gels to the Manhattan skyline in the process.
Lise Hiller Baggesen's installation Mothernism calls on viewers to "PUT THE MOM IN MOMA," among other maternally centred propositions.
Lyrics for "The Wages Due Song," a 1970s composition that artist Jacqueline Hoa Nguyen found in the archives of Toronto's Wages Due Collective. With her partner Thunder Tillman, Nguyen created new music for the activist song calling for compensation of women's unpaid labour and re-presented it at "The Let Down Reflex."

“Does your Gallery, Museum, Conference Center or Festival provide Child Care?” The US-based collective Home Affairs asks this question in its work And Everything Else (2015), which makes up the poster for the current New York show “The Let Down Reflex.” The exhibition’s theme: creating space for children and families in an artworld that treats them as persona non grata—or, as Chicago’s Lise Haller Baggesen, one of the artists in the show, asks in her installation and book project Mothernism (2013–16), how to locate the “mother-shaped hole in contemporary art discourse?”

The question is urgent, and the show’s title “The Let Down Reflex,” refers, literally, to a feeling of being let down by the artworld again and again that many artist-parents share. It’s also worth noting that the “let-down reflex” is a similar phrase associated with breastfeeding, where it describes the release of milk at certain stages of a feed—but here it more strongly refers to the artworld assumption that children are inevitably harmful to your career.

Namely, it is assumed in the artworld that after becoming a parent you will no longer participate in professional life at the same rate: your travelling will be limited, you will no longer attend as many events, you cannot devote every waking moment to your studio or critical practice. And as the artworld rewards such affective labour of continuous participation, this assumption will soon render you un-invited, and then forgotten. You are let down before you even had the chance to “lean in,” as Facebook executive Sheryl Sandberg advises.

How can we find a solution to the problem of exclusion? The show’s curators, Amber Berson of Montreal and Juliana Driever of New York, are clear. They demand a shift in focus from the individual artist to a “slippage” in “the institutions built to support the artists and administrators working within them,” as they write in the curatorial statement. Such slippage concerns the complete lack of financial support structures for families, but also, which I can attest to on a personal note, a feeling that your child is generally unwelcome.

The art-technology duo LoVid’s video collage Kids at a Noise Show (2015–16) responds to this sentiment by showing pictures of the growing LoVid family at art events. The New York couple’s three children sleep on stage in soundproof boxes, sleep in strollers, or hang around art spaces and concert venues as their parents set up. LoVid shows their family as a necessary and important part of their practice, rather than a nuisance that should be avoided.

In the same way, Leisure (Montreal’s Meredith Carruthers and Susannah Wesley) rewrites the history of the artist-parent by way of a historical case study in Conversation with Magic Forms (2015). The work prompts an intergenerational dialogue between British Modernist sculptor Barbara Hepworth, a mother of four, and her son Simon Nicholson who, as an adult, wrote the groundbreaking work on creativity “The Theory of Loose Parts.” Leisure re-inserts motherhood into Hepworth’s practice by adding a Xerox copy of Nicholson’s article to a catalogue of her works. It shows how having children in her studio changed Hepworth’s materials and tools, and, further, how having an artist-parent shaped Nicholson’s educational theories.

Archival models prompt another approach to intergenerational dialogue, as in Jacqueline Hoàng Nguyễn’s sound installation The Wages Due Song (2016), which was made in collaboration with her partner Thunder Tillman. The song was originally written by the Toronto-based feminist collective Wages Due Collective, formed in 1974, and calls for women’s unwaged labour to be addressed as a worker’s struggle. The Montreal-born Nguyễn found the lyrics in the collective’s archives, and has, together with Tillman, attempted to recreate the melody.

Hearing The Wages Due Song performed today points to another important issue referenced within the show’s title. Because the let-down reflex is supposedly linked to a flow of the hormone oxytocin from the brain, and because oxytocin is commonly associated with a feeling of love towards one’s child, the milk, in this chain of reasoning, flows from love. Today, as in 1974, it is assumed that art, like milk, flows from love and therefore doesn’t need financial compensation. It has hardly changed since 1974, though, that financial issues put extra stress on the artists whose lives encompass both art and parenthood.

Spending a lot of time indoors after becoming a parent is a huge change to most people’s lives—a change that might (read: often) cause a feeling of isolation and desperation. This can be especially hard on new mothers if they also have to deal with the strenuous daily schedule of breastfeeding an infant.

Such a feeling of isolation or absence directs Shane Aslan Selzer’s video projection Horizonlines: Gowanus (2013–15.) The video depicts a series of video loops of the skyline of lower Manhattan as seen from the artist’s bedroom window in the neighbourhood of Gowanus, Brooklyn. As clouds move across the sky and the light on the buildings changes, we hear the small interactions between the artist and her child, who cries, laughs and talks. The skyline becomes an object of desire: the cherished space of the Manhattan artworld from which the artist is detached qua her role as a caregiver. Instead, she paints an affective landscape portrait of this space by gluing a collage made of lighting gels directly on the window and filming through it. She locates the mother-shaped hole in the art world: herself.

The most important routine for families with small children involves winding down for bedtime in the late afternoon, a schedule that clashes continuously with artworld events. For this exhibition, the curators created a small structural change within EFA Project Space by moving the show’s opening from the prime-time slot of the evening to the afternoon to accommodate families.

The best piece in the show, Dillon and Peregrin de Give’s collaborative performance and installation By My Own Admission (2016), addresses exactly this question. For the exhibition, two-and-a-half-year-old Peregrin de Give’s bed has been moved from a Brooklyn apartment into the gallery space. On two select nights, Dillon and Peregrin attempted to perform their normal bedtime routine in front of a live audience, and subsequently spend the night in the gallery space. By My Own Admission’s title underscores that getting a small child to sleep is a collaborative process. Bedtime is an intimate space between parent and child created by repeated acts of care and nurturance that require a parent to be present at home.

It is politically relevant to include children in the artworld. It has nothing to do with claiming space for your own fairy-tale version of the white, ideal, middle-class parenting that is shared on “mommy blogs” and celebrity television shows. Parenting makes up a threshold in life. Giving birth betrays capitalism’s golden promise that rightful consumption will keep you young and beautiful. Parenting, for most, means loving someone else infinitely more than yourself, and putting their needs above your own at each step. The affective, unpaid labour of parenting interrupts the artworld’s self-absorbed structure of a hermetically sealed circuit of people who share socioeconomic backgrounds, ambitions and interests.

As Isabelle Graw states about her social relationships before parenting, “[They] were largely instrumental: I would scarcely have concerned myself with anyone who didn’t interest me in relation to my work.” Parenting makes such exclusivity impossible. Through your children, you meet and interact with people who are very different from yourself. Parenting is a small crack in an increasingly segregated world exacerbated by the financial realities of surviving in the artworld.

Theorizing while parenting also brings with it new models for knowledge, or as Lise Haller Baggesen quotes Susan Griffin in Mothernism: “I don’t have a theory on motherhood…. For necessity does not stop long enough for us to analyze. We only have brief illuminations, which we must record between interruptions, set down side by side, hoping to make sense of it all some day later.”

Through all these issues, “The Let Down Reflex” raises questions about space, dialogue, solidarity and new modes of theory. Parenting can interrupt fluid structures of capitalism and prevent them from eating away at our personal space. Parentalism can obtain a new meaning—not as a mode to assert authority over our children, but over our own lives.

“The Let Down Reflex” continues until March 12 at EFA Project Space in New York, with a panel organized by Jacqueline Hoang Nguyen slated for February 27 and a webinar on “Artists Raising Kids” scheduled for March 10.

Maibritt Borgen is a doctoral candidate at the Department of History of Art, Yale University, and is an alumnus of the Whitney Independent Study Program. She has worked as a curator and a critic in Denmark and abroad, and is currently living in New York.

This article was corrected on February 23, 2016, to clarify that Susan Griffin’s 1974 essay “Feminism and Motherhood” is the source of a quote cited by Lise Haller Baggesen.