Olivia Boudreau: Oscillations of the Visible 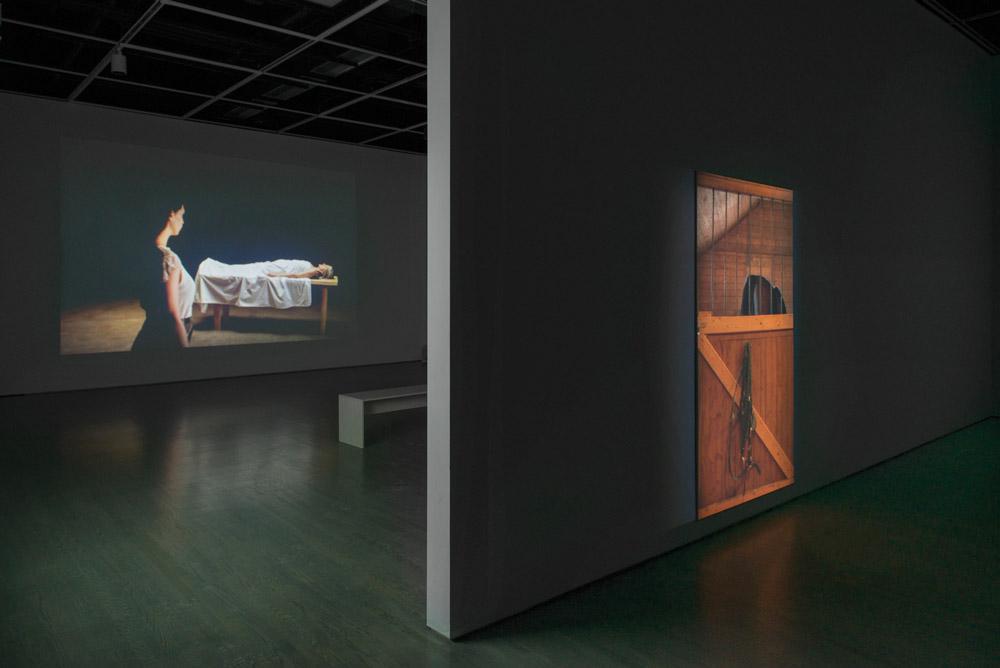 Olivia Boudreau’s videos and performances—gracefully composed works of long duration—are a welcome interlude amid the accelerating temporality of our image-saturated age. For her first major solo exhibition, “Oscillations of the Visible,” the artist invited viewers to contemplate works that inspire reflections on the experience of time and the act of perception.

In the lobby of the gallery, a moving image set the tone for an installation of 14 works created during the past 10 years. In Your Piece (2007), a motionless camera lingers over the profile of a woman engaged in an intense and silent monologue. The tightly framed composition creates an opportunity for an intimate encounter, where slight variations allow viewers to observe what is inside the frame and imagine what is left unseen and unspoken. As the woman rotates her head slightly, wipes tears from her eyes or tenses her neck, subtle movements express the vulnerability inherent to human relationships.

In Pelages (2007), a woman, seen from one side on her hands and knees, attempts to hold a pose for a prolonged period of time, an experience that might resonate with the long exposures of early photography. She wears white underwear underneath the short fur coat that envelops her body. Because the video lasts almost five hours, she must continuously modify her position to sustain her endeavour. As she supports her weight on her elbows, lies down or allows her hair to cover her face completely, her body fades into the backdrop and the coat becomes an ambiguous form. The image oscillates between a fur-covered beast and a tired cliché.

In Pelages, the artist allows her own body to submit to the passage of time, whereas in Box (2009), Boudreau relinquishes the exercise to a horse kept in a box stall for 22 hours. In this video work, the artist’s fixed camera magnifies the mundane activities of a physically and symbolically powerful animal in a restrictive space. At one moment, daylight floods in from a window at the back of the stable and, when the horse obscures the light source, the image flutters between darkness and luminosity. In these works, succumbing to the weight and density of time makes possible the reception of gradual changes and multiplication of interpretations.

In a performance titled Lying Bodies, Standing Bodies (2014), two performers took turns lying across the gallery floor and standing, alternating their positions when one of them got tired. This work set the stage for Boudreau’s first major piece to make use of narration and editing, Femme allongée (2014), a carefully choreographed sequence captured with clinical precision. A woman draped in a white sheet lies on a table with her grey hair tucked underneath her neck. Immobile and expressionless, like a body prepared for dissection in an anatomical theatre, she becomes the focal point for a string of activities. As she hovers seemingly between life and death, the final image shows a close-up of the sheet rising and falling with the rhythm of what may be her last breaths.

This is an article from the Summer 2014 issue of Canadian Art. To read more from this issue, visit its table of contents. To read the entire issue, pick up a copy on newsstands or the App Store until September 14.