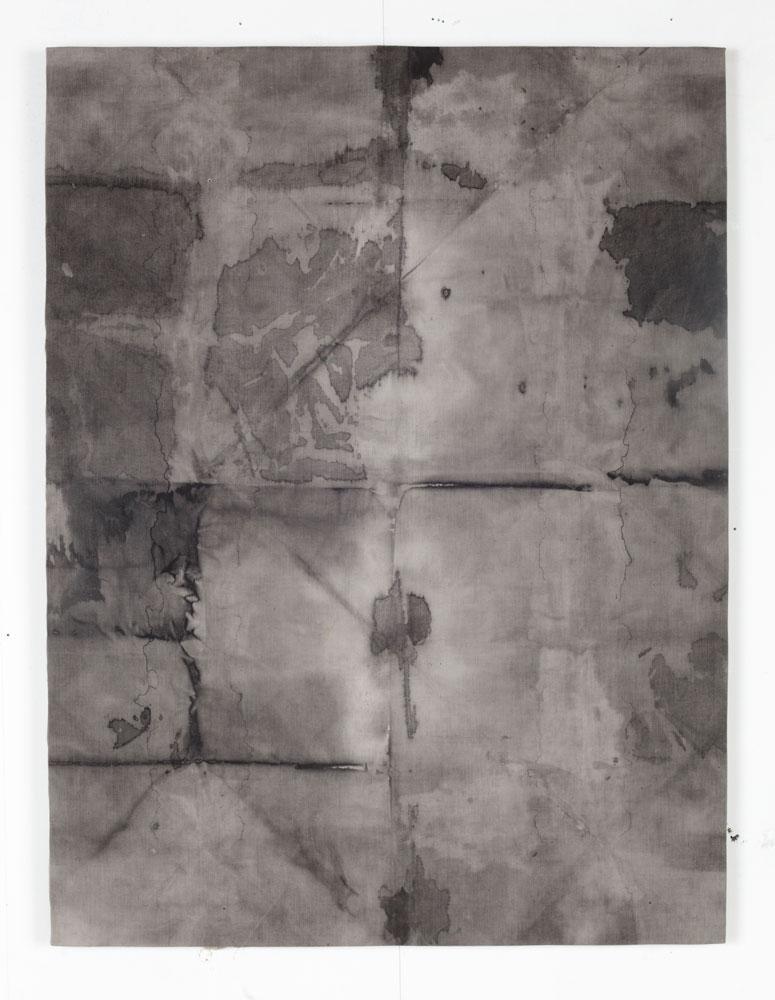 Niall McClelland Every Line on Your Face 2013 Courtesy the artist and Envoy Enterprises, New York

Niall McClelland’s first solo exhibition in New York, “Bruce to Brock and Back” at Envoy Enterprises, explicitly engaged grand perennial themes of nature, landscape and wilderness. Although the gallery notes went a bit overboard in asserting this context—even including a Wikipedia-style history lesson on the legacy of the Group of Seven within Canadian art—the 11 disparate works hung, tacked, and glued to the walls of the small gallery approached these potentially overweening motifs with playful materiality and refreshing obliqueness.

This Toronto-based artist frequently devises idiosyncratic working methods that combine design with chance; this allows him to discover unexpected ways of using his (often unconventional) materials. For instance, No Maps – Nights 1 employs a technique for which McClelland has become known: folding paper that is stained black with photocopier toner into intricate, abstract patterns of creases.

The found object is a central element of McClelland’s practice. Sometimes this takes the form of actual scavenged items, as with Roswell Nevr 4Get—a found tablecloth with a rough sketch on it tacked to the gallery wall—or O.P.P. (Other People’s Paintings), which displays the reverse side of found canvasses glued together and mounted on a stretcher. In other cases, McClelland exposes his materials to the elements until they transform into something he finds interesting enough to work with further or put on display. The murky, mysterious grey-black surface of 1424 was created by weathering an ink-stained pillowcase.

McClelland’s frugal working methods and unpolished style may have their roots in the subcultural sensibilities of punk rock, doom metal and skateboarding, while the general aesthetic clearly nods to the history of Minimalism and abstract painting.

Yet viewing McClelland’s work as a response to traditional art-historical questions of nature and landscape makes a surprising amount of sense. Some pieces call to mind decaying textures found in the natural world, such as the fractured surface of Adventure, a digital print on a canvas depicting a nautical scene; it resembles a block of cracked ice. Others, like All White Bricks, Off White Bricks, Light Tan Bricks, which consists of brick-residue stains on a weathered canvas, investigate the indeterminate zone between natural and man-made detritus.

Ultimately, the conceptual force of the show derived less from its depictions of landscape elements than from McClelland’s methods of harnessing the destructive, deteriorating power of nature for his own purposes. In this sense, “Bruce to Brock and Back” succeeded in illuminating a crucial aspect of McClelland’s practice.

Michael Vass is the most recent winner of the Canadian Art Foundation Writing Prize.

This article was corrected on April 1, 2013. The original copy implied that the textile in 1424 was stained with ink after being weathered, when it was actually stained beforehand.