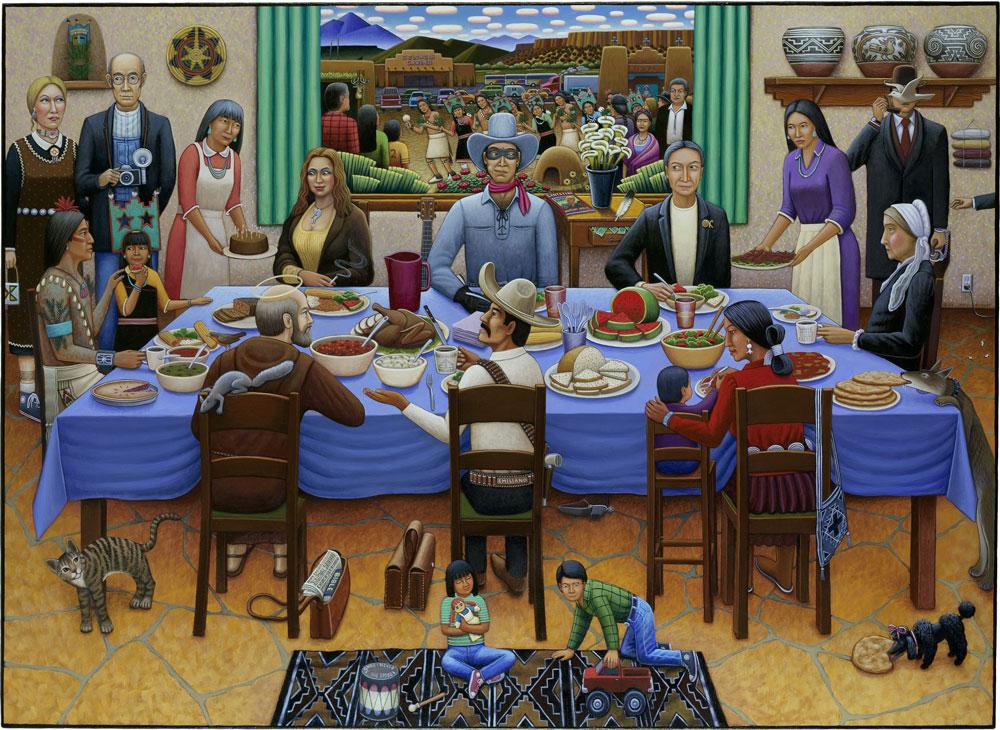 Founded in 1873, the Berlin Ethnologisches Museum, whose collection contains over 500,000 objects from pre-industrial societies the world over, is among the largest of its kind. In 1970, the museum began to acquire contemporary painting, sculpture and prints from “Native America,” part of a sub-collection of almost 30,000 objects focused on North America and the largest outside of Canada and the United States. “Native American Modernism” marks the first time an exhibition from this collection of 160 paintings, sculptures and prints has been featured on its own.

Curated by the museum’s head of North American Ethnology, Peter Bolz, the exhibition announces itself outside the entrance of the upper gallery with two sculptures (one literal, the other abstracted) by Apache Bob Haozous and a video projection merging traditional and hip-hop dancing by Tlingit Nicholas Galanin. The pairing of these artists provides an appropriate overture to the larger exhibition, given that, of the 42 living participants, Haozous and Galanin are among the furthest apart in birthdate and region.

While the distinction between art and artifact is addressed in Bolz’s catalogue essay (he is appropriately dialectical), the museum could have cited past exhibitions of modern Native American art. For instance, Doris Shadbolt’s 1967 “Arts of the Raven” at the Vancouver Art Gallery argued that art made by First Nations artists in our moment does not belong to time immemorial, as artifact, but to the contemporary (modern) conversation, be that through shared mediums and materials, variations in marks and motifs, or passages between figuration and abstraction.Despite competing conceptions of space and time among the cultures represented, and modernism’s own tendency towards abstracted thematics based on formal conflict and convergence, the work inside the gallery (mostly paintings and prints) is organized largely by “culture area” (“Southwest,” “Plains and Oklahoma,” “Northeast” and “Northwest Coast”), and within that, chronological fidelity. A consequence of these spatial and temporal frames is that they echo the rigid artifactual regimes in the museum’s lower galleries. Thus, the potential for these modern forms of symbolic (and individual) expression to speak as art, not artifact, is restricted, much like the reservation system and “Indian Schools” many of these artists endured.

As such, categories that reflect the Native American cultural experience, like those solicited by the first ethnographers (the informational drawings of Sioux war scenes that appear to the right of the gallery entrance), the idealized culture encouraged by “Indian School” educators like Dorothy Dunn (whose students included Apache Allan Houser), the culture as “Fourth World” hostage (Iroquois Peter B. Jones and Salish Lawrence Paul Yuxweluptun), the culture depicted in European art historical styles (of which there are many examples, most notably the “Cubism” of Hopi Michael Kabotie and the “Surrealism” of Yuxweluptun), the culture commodified (Chippewa David Bradley), would allow the works from this collection to enter an equally modern form of exhibition-making, one that might mirror the formal innovation found in some of the collection’s more thoughtful and innovative works.