Michael Snow Sets New Sights At the AGO 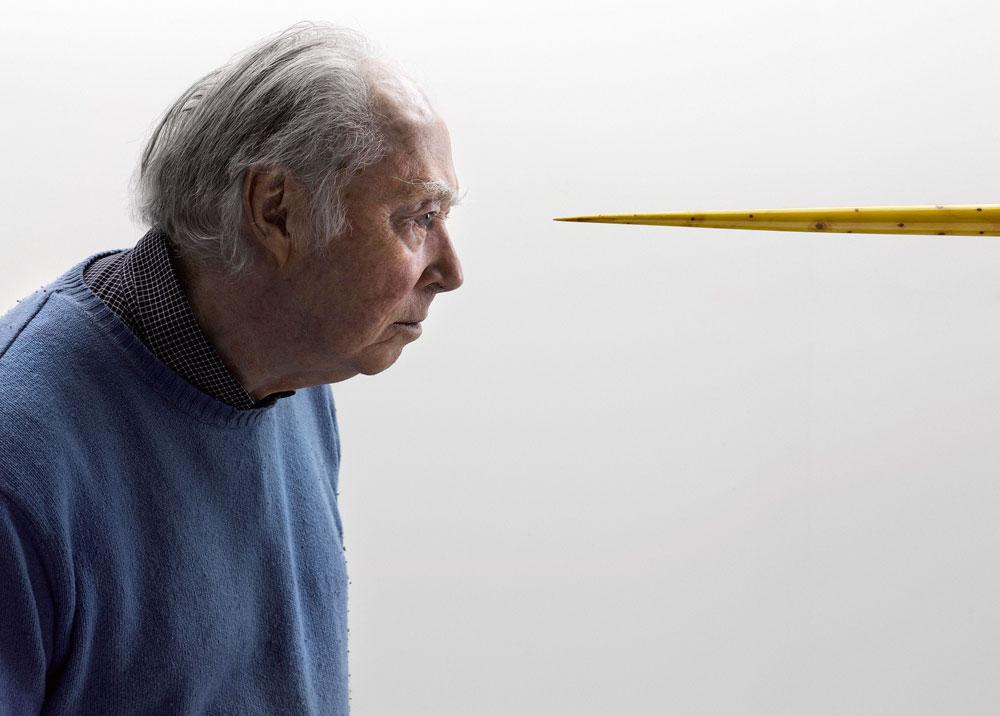 At 82, Toronto artist Michael Snow has savoured his share of honours, from his 1995 election to the France’s Chevalier de l’ordre des arts et des lettres to his Guggenheim Fellowship back in 1972. Accolades, though, are often sweetest when savoured at home, as has been the case of late. Last year, Snow was named the 26th recipient of the Gershon Iskowitz Prize, awarded annually to a Canadian artist of distinction, and a small exhibition at the Art Gallery of Ontario this summer—a tightly focused display of his sculptures dating back to the 1950s, organized by the AGO’s Georgiana Uhlyarik—is marking the occasion.

Titled “Objects of Vision,” the show delivers a kind of optic workout. Among the pieces here: Seated Sculpture (1982), a faintly punitive-looking steel object that restricts the seated viewer’s sight to a two-metre-long wedge of enclosed horizontal space. Another work, Sighting (1982), offers a kind of skewed armature into which one directs one’s gaze. Thanks to its design, however, your eyes sit uncomfortably astride a metal truss, prompting a strangely uncomfortable awareness of binocular vision. Sight is revealed for what it is: a perceptual hybrid, cooked up in the brain.

Sight also helps us navigate space, and Snow’s wall-leaning sculpture Quits (1960) offers a concise meditation on this phenomenon. Five panels move outward into space, the first lying flat to the wall and each subsequent one spilling forward, with the last panel lying face-down on the floor. The sculpture is static, yet it seems built to evoke a kind of stop-motion animation as it transitions from two dimensions (the domain of painting) to three (the realm of sculpture). Little gestural dribbles of paint on the panels fore and aft (blue on the front, green on the back) call to mind traditional modernist debates on the picture plane. Must a painting declare itself an object first and foremost? Quits seems to answer in the affirmative.

Snow says that Quits is kindred to several of his works from the same period which worry at the confines of painting. To make one such work, he painted a large sheet of paper and then tore it into pieces which he pasted one on top of the next, stacking them outward from the picture’s surface, “like a calendar.” Red Square (1960) involved folding unstretched canvas onto itself and then painting over it, then unfolding it and stretching it on a frame, so that the canvas serves as a stencil of itself. In these works, as in Quits, painting declares itself a built thing—not a window into a zone of illusion.

Memory also plays a role in seeing, triggering associations, and in this regard Quits is a gold mine. At first glance, it looks like a standing figure, as stiffly two-legged and frontal as any Greek kouros. But look again, and it registers as a painter’s stepladder, slightly mashed and on crutches, with intimations of a water wheel, or a Ferris wheel whose seats swing in the breeze. If you pay attention, it keeps you busy.

Much has been made of Snow’s preoccupation with vision, and of his own father’s loss of sight during Snow’s boyhood—first one eye and later both. But Snow also remembers a childhood moment in Chicoutimi, Quebec, where he grew up. “I was about eight years old,” he recalls, “and I was lying on the grass, and I remember asking my sister to take a picture of me from the feet end. I was interested in that distortion, on the impact of point of view on representation. I wanted to see what that would look like.” Can the journey of a life set sail from a single summer day? You have to wonder.

In any case, Snow—and his fans—still have much to look forward to. This fall, his new 65-storey-high light sculpture Lightline is due to be unveiled at the new Trump International Hotel at Bay and Adelaide Streets in downtown Toronto. New work by Snow will be included in the inaugural exhibition “Archival Dialogues” at the Ryerson Image Centre (opening September 29) and in “Builders,” the Canadian Biennial at the National Gallery of Canada (opening November 2). As well, a survey of Snow’s work in photography will be staged at the Philadelphia Museum of Art next year.