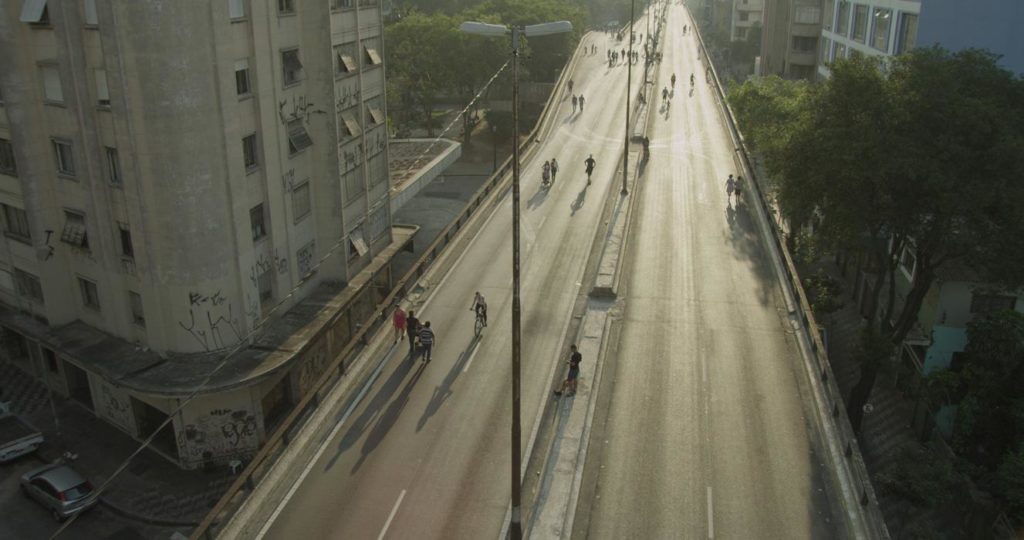 Mark Lewis, Above and Below the Minhocao (film still), 2014.

Mark Lewis, Above and Below the Minhocao (film still), 2014.

Mark Lewis’s current exhibition at Daniel Faria Gallery in Toronto presents eight recent works, all of them silent, single-channel, single-take films shot on HD. This has long been Lewis’s signature form, and he has become impressively adept at utilizing it for wide-ranging explorations.

Invoking the Lumière Brothers’ “actuality” films, Lewis’s project is in part a return to cinema’s foundational impulse to document the present world in moving images. Lewis’s films are very much photographic records of time and place, as indicated by his titles, which, more often than not, reference location. However, the films are also rigorously constructed and bear the influence of both narrative and structuralist filmmaking. The carefully choreographed camerawork plays with duration, and Lewis sometimes uses actors and stages events. This tension between documentary observation and narrative/formal construction is fruitfully mined in the Faria show.

In the main gallery space, three films are shown in succession, projected at a large scale on a white wall.

Observation at Cheorwan County (2014) consists of a glacially paced aerial shot surveying a contested region split between North and South Korea before coming to a rest on Korean tourists as they peer out at the landscape from an observation deck.

In Derek Jawgeer (2013), a roaming ground-level Steadicam shot circles a traffic roundabout in the London Borough of Brent, then descends down a winding ramp into a subway-station tunnel where a man with a guitar is busking.

Above and Below the Minhocao (2014), the most complex work in the show, focuses on a car-free elevated roadway in Sao Paulo used by pedestrians, joggers and cyclists while heavy traffic streams beneath it. Lewis’s sweeping aerial camera slowly moves from one side of the elevated roadway to the other as it follows a man talking on a cellphone who crosses beneath.

Highly stylized cinematography and staged actions combine with hands-off documentation of spontaneous events in these works, blurring the line between observation and construction. Unplanned elements tend to appear staged, such as the pedestrians and cyclists moving across the Minhocao in Above and Below, who seem like perfectly timed and lit Hollywood extras. Meanwhile, staged elements like the man on the phone blend seamlessly into the flow of haphazard reality. Lewis’s controlled, choreographed camera often functions, somewhat paradoxically, to provoke a wandering gaze, inviting us to look around in all directions. The modernist aesthetic is used to refresh the most basic kind of documentary observation.

These three films all have a linear structure with a clear beginning and end. This is defined spatially more than narratively, with the staged elements functioning as a kind of structural support for movement through shifting spatial realms. In Above and Below, the journey of the man on the phone provides the camera with a reason to move up and down the Minhocao, presenting a multifaceted portrait of a complex social space.

In Observation, Lewis’s camera divides the landscape into distinct areas that almost function like mini-chapters: a man-made rooftop; a forest of leafless trees; a hillside with cut-out trenches from the war; empty farmland in a valley; and, finally, the tourist observatory. The dynamism of the film comes from traversing these separate areas, and yet the film also stitches them together into a panorama never shown in its entirety, and which remains just on the edge being imaginable.

In Derek Jawgeer, the transition from exterior to interior is also a movement from natural light to artificial light and from curved lines to straight lines. The journey has a metaphorical aspect as well, suggesting the movement from an objective perspective to a more subjective space occupied by the busker, who Lewis shows in a rare close-up, singing with his eyes closed. For me, this film works better as a carefully constructed trip through space than as a psychologically suggestive portrait of the titular street musician; as such it seems a touch pat, relying too much on clichéd indications of interiority.

In Faria’s secondary space, five other films are shown in succession on a medium-sized, wall-mounted monitor. These share several visual and thematic motifs with the films in the main space but, in general, feature looser, less linear structures. The smaller scale of the presentation, along with the diminished quality of the image on the monitor, creates a more distanced viewing experience. It becomes harder to get lost in the textures of the locations, and the focus tends to shift towards the formal/conceptual aspects of the films.

This distancing can, however, be effective. The roving, remote-controlled aerial camera in Beirut (2011) takes on a vaguely sinister, drone-like quality on the monitor, while the static composition of Escalators at Pinheiros (2014) suggests an ant-farm view of endless streams of people gliding up and down criss-crossing escalators in São Paulo.

On the other hand, the smaller presentation scale makes a work like 360 Degrees on the Border Between North and South Korea (2014) seem like a relatively pedantic exercise in delivering the titular content without many aesthetic compensations.

If the Faria show has a flaw, it’s that there is almost too much work to take in. There are plenty of compelling echoes between the films, such as an interest in borders and spatial demarcations and divisions (north/south, above/below, exterior/interior, public/private, etc.). However, each film deserves multiple viewings and individual consideration. This becomes a demanding task when the combined running time of the eight films reaches nearly an hour. Nonetheless, most of the work on view is strong enough to reward the patience required to give the exhibition its due consideration.