Magnetism vs. Merchandising: The Object Triumphs of Celia Perrin Sidarous 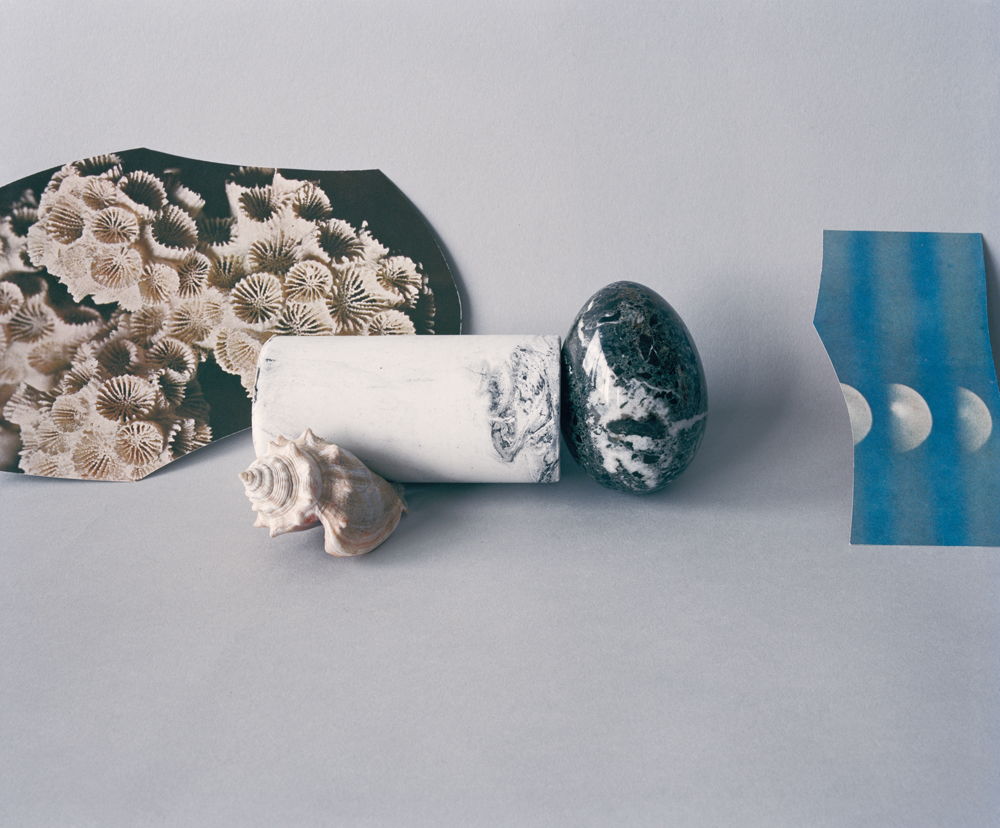 Celia Perrin Sidarous’s work is habitually characterized in terms of the collecting practice that facilitates her photographs. However, her first solo show at Parisian Laundry, “Les Figures,” illustrates that the accretion of oddball goods, loose clippings and talismanic souvenirs is really subordinate to the careful process of orchestrating evocative relationships between the objects. This ability attests to a kind of object fluency, an erudition when it comes to things and how they can be void of specificity but saturated with sentiment. “Les Figures” is extremely economical. This is not a show about arbitrary excess, stuff upon stuff, but subtle material conversations.

The new body of work, a combination of photographs of delicate-hued tableaux and landscapes and artifacts captured on a recent trip to Greece, beckons interpretation but eludes tidy explanation. Perrin Sidarous’s gravitation toward the imagery of classical antiquity infuses materials with a sense of history while shrouding the specificities of time, place and provenance in mystery. Some reference points are distinct, as in a Greek relief fragment emerging from the peculiar dusty pink walls of Hadrian’s Library, or the simultaneously lush and dehydrated landscape at the site of the ancient Agora of Athens.

These photographs are set against loosely corresponding imagery—columns, draped fabric, a marble egg and cylinder—which are arranged into groupings and photographed in the studio. The photographs taken in Greece, although unmanipulated, mimic the quiet relational logic of Perrin-Sidarous’s staged assemblages; the thick sections of marble column in Eleusis appear to have been propped up for a portrait. Removed from context, their scale would be indecipherable and they could find an easy place among the shrunken pearlescent treasures in the adjacent studio-based photographs.

The frustration is that Perrin Sidarous’s composed worlds are so covetable. Crispy coral, a slice of mirror, tinted rose petals behind stiffly arranged hot pink tulle all remind me of a passage from Bluets, Maggie Nelson’s ode to the colour blue: “Admit that you have stood in front of a little pile of powdered ultramarine pigment in a glass cup at a museum and felt a stinging desire. But to do what? Liberate it? Purchase it? Ingest it?” I’m admitting it.

But the question of how to possess, interpret or internalize the items on display is perhaps less important than the simple admission that they invoke a desire in general. While there are plenty of artists working in a similar vein—collecting and staging found objects and in the worst case, performing a glorified form of visual merchandising—they so often fail to incite any kind of magnetism or fondness toward their chosen objects.

The use of classical imagery comes off especially (and intentionally) flat in the recent flurry of appropriation that has occurred at the cross-section of contemporary minimalist sculpture/installation and Internet/post-Internet art. Busts and columns are popping up everywhere: next to neon basketball hoops, houseplants and the Windows 95 logo, for example.

Somehow, Perrin Sidarous manages to sidestep completely the irony and cynicism endemic to these recent trends. Her photographs and props—including plain white plinths and risers set out carefully within Parisian’s airy main floor space—speak to an ongoing, steadfast sensibility and a genuine investment in the poetry of placement.

These placements are articulate; each wall is a long, lucid sentence communicated through tonally synchronized, sometimes repeated offerings. In this way, they are also lexical—utilizing a system of patterns similar to the process of language-formation. Vases, palms, seashells are pleasurable in the same way that an intuitive stacking of words can be.

This week I discovered the word marmoreal, which is a more beautiful way of saying made of marble, or marble-like. Marmoreal seems cool to the touch but also warm-blooded in that it sounds a bit like mammalian. It also belongs to an order of adjectives that yearn to communicate a very particular quality—textural, physical—without over-interpreting the object described. Celia Perrin Sidarous’s work produces a similar effect; edging in towards, hinting at, contouring signification. And so, “Les Figures” is marmoreal, fresh, briny, smooth, unblemished. The magic exists at the invisible point of contact between sets of objects, worlds and sensations.

For more information about Perrin Sidarous’s practice, read the profile “Sets and Sensibility” in the Winter 2016 issue of Canadian Art magazine, on newsstands until March 15.