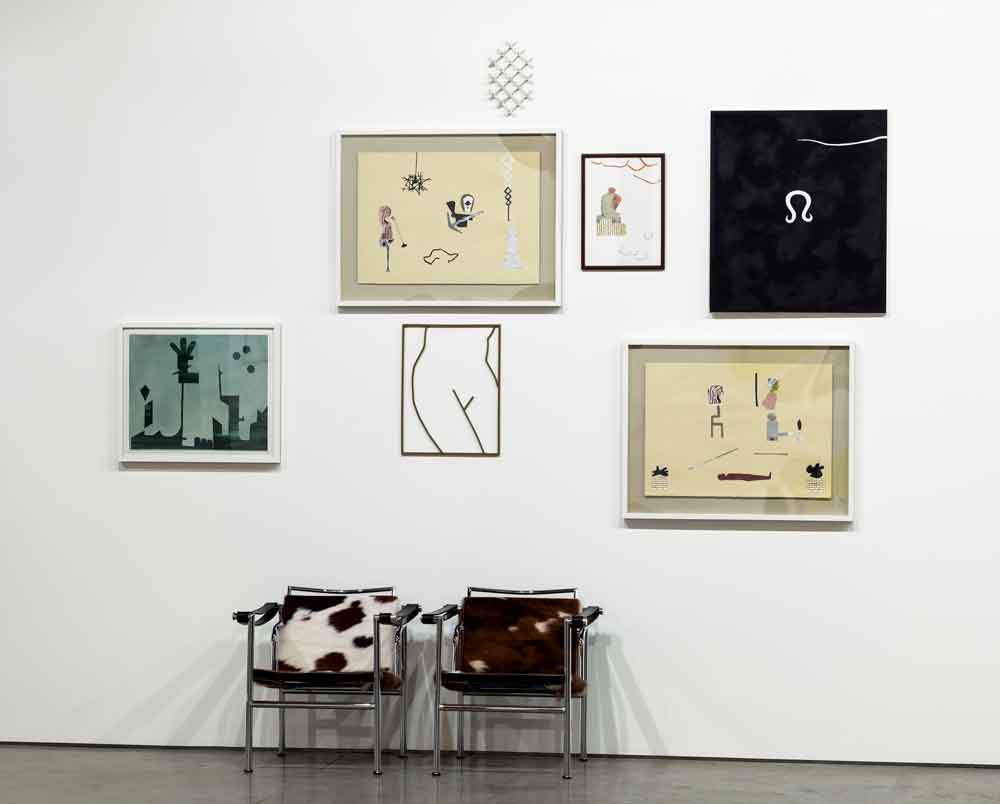 Luc Paradis has been a well-known figure in the Montreal art scene for nearly a decade. He’s shown work widely in the city’s alternative art spaces, designed numerous concert posters, and produced album artwork for local bands like Thee Silver Mt. Zion, Pas Chic Chic and now-defunct Feu Thérèse (of which he was a member), as well as American acts like the Black Lips and Jacuzzi Boys. Despite all this, “POMPIA” was Paradis’s first major solo exhibition in a commercial gallery, and he was clearly determined to make the most of it.

Most striking about Paradis’s output is how he manages to experiment in so many different mediums and styles—painting, collage, drawing and sculpture—while retaining a distinctly recognizable sensibility. Predetermined Destination (all works 2012), gouache on paper, offers maze-like geometric abstraction in a stark constructivist vein, and Black Cat Latter Crack repeats the same lattice forms as a metal wall sculpture, itself based on a found object presented here as Mama’s muffins. A similar grid pattern appears painted on a round plaster lozenge entitled Casual Satanism, which is one of several such mounted sculptural paintings—another, 4:20, is a white disc painted with a single clock hand marking that hour beloved of pot smokers.

These subcultural references are indicative of Paradis’s talent for drawing connections between the historical avant-garde and the vernacular DIY tradition. This is even more evident in his collage work and drawings, which place John Heartfield’s Dada cut-ups and Philip Guston’s more cartoonish, later works into a continuum with folk art, comics and zine culture. Surrealist allusions also abound, sometimes in the biomorphic abstraction of pieces like the oil-on-canvas work Simplified Model, but also more generally in the show’s oneiric appeal to the unconscious. There’s a compressed sense of sexual tension in the ambiguous forms and inscrutable symbols of Paradis’s abstract work that’s made explicit in the occasional figurative pieces, which often employ black-on-white silhouettes in suggestive poses. The one drawing that depicts full-length figures in a defined space is a tableau titled Nympho and a Lesbian. It simultaneously recalls Otto Dix and Marcel Dzama and reinforces the atmosphere of seedy, antique decadence conjured by the sepia-toned browns and billiard-table greens that dominate the colour palette of most of the works featured in the exhibition.

Given the scrapbook flavour of Paradis’s use of collage techniques, it’s notable that none of these works (with the exceptions of Nympho and a Lesbian and a drawing entitled Burnout Lovers) incorporates any textual elements. This seems reflective of the artist’s preference for the prelinguistic or subconscious: chance juxtapositions, found objects and dirty dreams. The only large sculpture that appeared in the exhibition, a hulking block of painted styrofoam ironically titled Brainiack, reads as a parody of the traditionally noble busts of great thinkers. With its squashed, Elmer Fudd–like features, it seems to suggest the absurdity and hubris of cognition, always bound to be defeated by the potency of base, inarticulate desire. Despite his facility with highbrow reference, Paradis pledges allegiance to the lowbrow, the underdog and the outsider. Thumbing his nose at the pretensions of bright minds, he bets on dark hearts instead.

This article originally appeared as a review in the Spring 2013 issue of Canadian Art. To read more from this issue, please visit its table of contents.