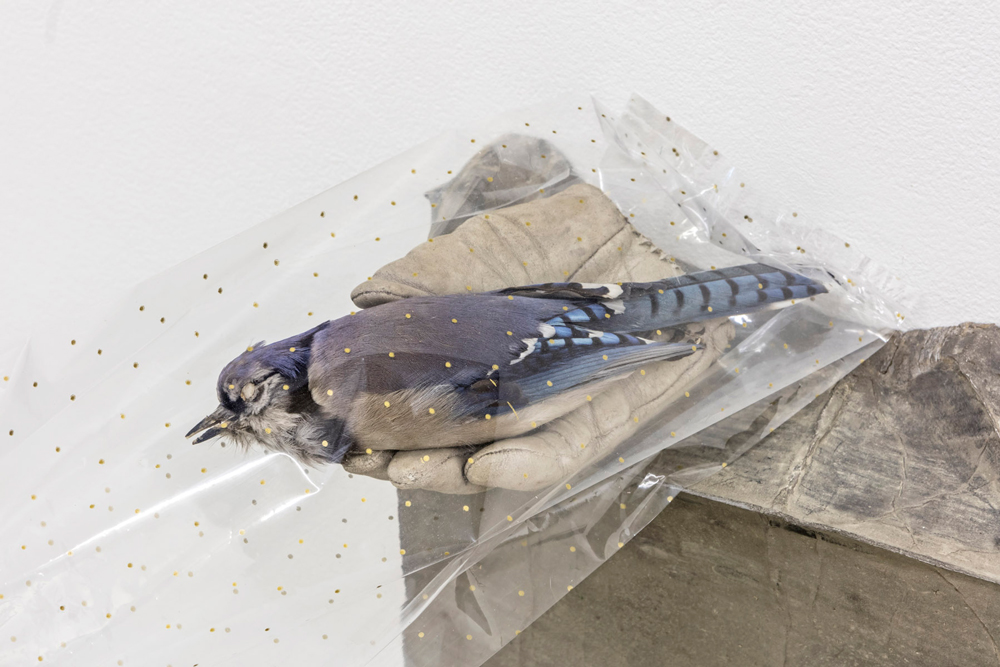 There’s a spare elegance to the work of Vancouver artist Liz Magor. Since the mid-1970s, Magor has explored the world at its fringes—whether with role-playing photographs of Edward Curtis–styled hippies and Civil War re-enactors, resin-cast tree-trunk hideaways or sculptural remakes of thrift store odds and ends (serving trays, wool blankets, sweaters, jackets, gloves)—tracking the inherent entropy of everyday life through its subcultural undercurrents and cast-off commodities. It’s a practice in which perception is reordered and redefined by material, and the shifting values of identity, meaning and memory.

For her latest solo exhibition at Susan Hobbs Gallery (running concurrently with a Gershon Iskowitz Prize survey show at the Art Gallery of Ontario), Magor gathers a tight selection of recent works that are as much puzzles as sculptures. Each of the five pieces is similarly stacked. Shelves cast from the insides of discarded cardboard boxes carry a taxidermy bird or a plush-toy dog (one cast, one painted) that rests on either the outstretched form of a glove or a bed of bubble wrap or foam packing. The birds—a Yucatan jay, a blue jay and an evening grosbeak, all specimens from a ca. 1880s collection from Mexico that Magor has had for decades—are delicately enclosed in translucent cellophane gift-wrap or a gift box that give the works their titles: Gold Box, Speckled Veil, Pink Shimmer.

Formally, there is an almost impromptu series of poetic reversals that give the works their composite, puzzle-like quality. The rough plaster shells of crumpled and broken cardboard boxes, taken from objects that no longer have any use value, are refashioned as supports for the elevated display of rarefied antique specimens or reworked plush toys. In two of the works where the birds are held by hard-cast gloves, a tactile, even delicate, human presence is inferred, but also denied. Where the songbirds are wrapped or boxed, a precious barrier is formed, enclosing the once vibrant life force of these animals in the ornamental still life of commerce. The same might be said for the once-plush toy dogs, which no longer function to soothe but take on the hard lifelessness of a kitsch statue or lawn ornament.

Whatever you make of the various elemental turns and double meanings, Magor maintains a quiet distance, declaring freedom from any determined critique or statement. She is sketching for us the accumulated “stuff” that surrounds and defines us, and that we too often taken for granted.