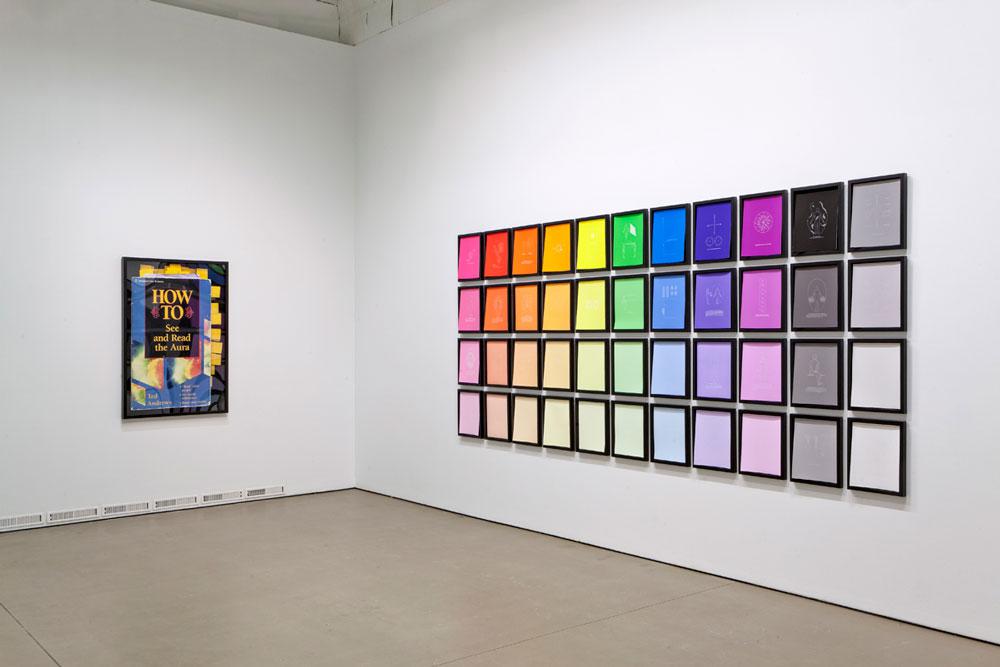 Kyla Mallett’s How to See and Read the Aura at Mercer Union continues the artist’s ongoing exploration of the aesthetics and interpretation of pseudo-scientific self-help literature. Using the diagrams and theories of Ted Andrews’s 1991 book How to See and Read the Aura as her source material, Mallett constructs her own guide to perceiving the invisible—and in turn, she offers parallels to the creation and reception of contemporary art.

A framed, large-scale lightjet print of Andrews’s book hangs on one wall. The multicoloured cover is creased and worn, and yellow tabs stick out along the edge, marking numerous pages. The cover of the guide claims to aid users in how to “‘read’ other people,” “see health imbalances” and “boost your vitality” through the practice of rendering the invisible aura visible.

On an adjacent wall, a grid of 44 framed screenprints presents information and instructions on identifying and reading auras. A rainbow-like gradation appears from left to right across the top row of 11 prints; each print is a different colour, beginning with fuschia and ending with grey. Similarly, each vertical column of four prints varies according to the saturation of a given hue; at the top of each column is a saturated colour, and at the bottom, a pale, washed-out version of same. The prints, which are in black frames without glass, seem to glow faintly under a UV light overhead—a result of Mallett’s use of UV-sensitive ink.

Mallett’s condensed “how-to” instructions begin in the top-left corner and move down each vertical column of prints. The light-coloured lettering is hard to read unless one is close up, and it is especially difficult to decipher on the paler saturations. Moving closer casts shadows on the prints, which seems to make some texts more clear and others less so.

When the UV light overhead shuts off, as it does at periodic intervals, the appearance and experience of the work are dramatically altered. The prints no longer glow, and the visibility of the prints’ diagrams and texts shifts. When the light turns back on and gradually warms up, the appearance of the work changes again.

An accompanying essay by Sarah Robayo Sheridan notes this effect of ambient lighting on the work, where changes in lighting cause each image to transform. At some moments, barely visible diagrams become more visible—just as reading auras may reveal previously invisible information. Here, Mallett translates the task of perceiving and reading auras to the task of observing and interpreting her work, as both rely heavily on the visual as well as on aesthetics.

On a broader level, Mallett uses the promises purported by self-help literature such as Andrews’s manual as a means of exploring ideals of the past and present. Contemporary artistic practice may not claim to “boost vitality,” but interpreting it can be a difficult task as images and meanings shift over time and circumstance. However, attuning our perceptions to the fact of such changes creates an understanding that may also grow over time, an understanding that relies less heavily on one overarching interpretation.

Ultimately, How to See and Read the Aura draws on the aesthetics and rhetoric of self-help literature and contemporary art to create a “how-to” guide on perception.