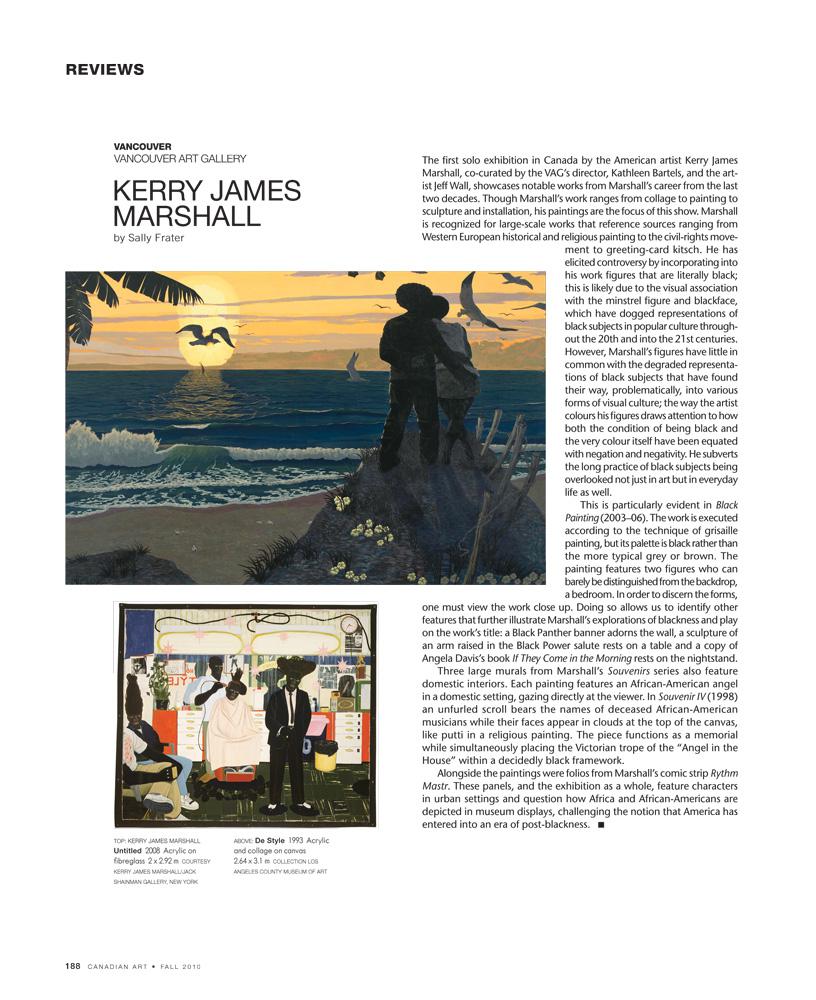 Spread from the Fall 2010 issue of Canadian Art

The first solo exhibition in Canada by the American artist Kerry James Marshall, co-curated by the VAG’s director, Kathleen Bartels, and the artist Jeff Wall, showcases notable works from Marshall’s career from the last two decades. Though Marshall’s work ranges from collage to painting to sculpture and installation, his paintings are the focus of this show. Marshall is recognized for large-scale works that reference sources ranging from Western European historical and religious painting to the civil-rights movement to greeting-card kitsch. He has elicited controversy by incorporating into his work figures that are literally black; this is likely due to the visual association with the minstrel figure and blackface, which have dogged representations of black subjects in popular culture throughout the 20th and into the 21st centuries. However, Marshall’s figures have little in common with the degraded representations of black subjects that have found their way, problematically, into various forms of visual culture; the way the artist colours his figures draws attention to how both the condition of being black and the very colour itself have been equated with negation and negativity. He subverts the long practice of black subjects being overlooked not just in art but in everyday life as well.

This is particularly evident in Black Painting (2003–06). The work is executed according to the technique of grisaille painting, but its palette is black rather than the more typical grey or brown. The painting features two figures who can barely be distinguished from the backdrop, a bedroom. In order to discern the forms, one must view the work close up. Doing so allows us to identify other features that further illustrate Marshall’s explorations of blackness and play on the work’s title: a Black Panther banner adorns the wall, a sculpture of an arm raised in the Black Power salute rests on a table and a copy of Angela Davis’s book If They Come in the Morning rests on the nightstand.

Three large murals from Marshall’s Souvenirs series also feature domestic interiors. Each painting features an African-American angel in a domestic setting, gazing directly at the viewer. In Souvenir IV (1998) an unfurled scroll bears the names of deceased African-American musicians while their faces appear in clouds at the top of the canvas, like putti in a religious painting. The piece functions as a memorial while simultaneously placing the Victorian trope of the “Angel in the House” within a decidedly black framework.

Alongside the paintings were folios from Marshall’s comic strip Rythm Mastr. These panels, and the exhibition as a whole, feature characters in urban settings and question how Africa and African-Americans are depicted in museum displays, challenging the notion that America has entered into an era of post-blackness.

This is an article from the Fall 2010 issue of Canadian Art. To read more from this issue, please visit its table of contents.

Sally Frater is the curator of contemporary art at the Art Gallery of Guelph. She is interested in issues of place, memory and body in her curatorial practice.