With selections from Vancouver and Toronto, Karina Irvine’s 2015 art highlights all toy with language. 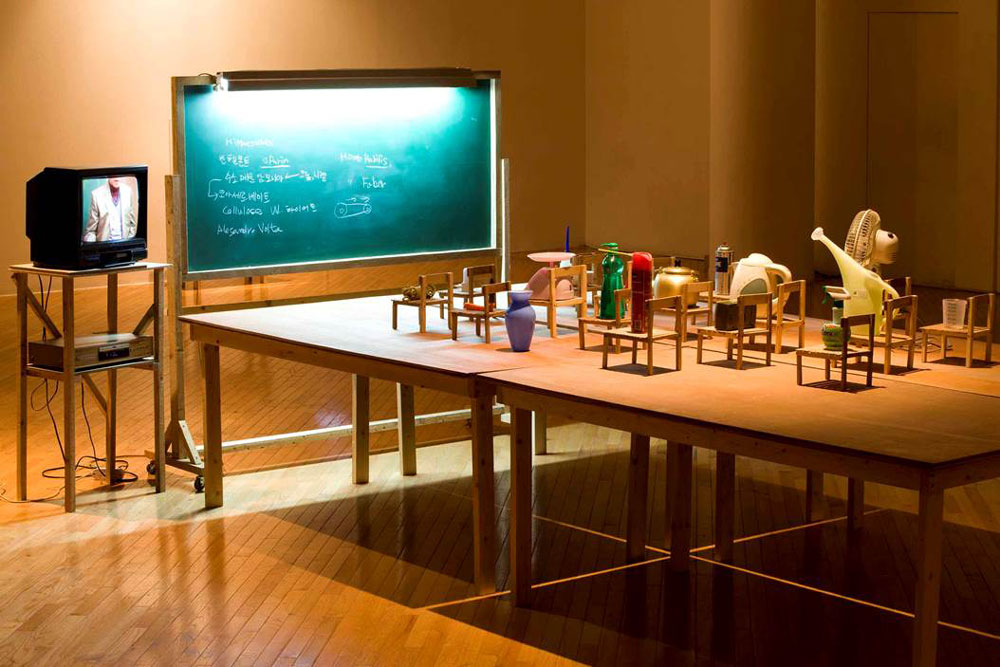 Kim Beom, Objects Being Taught They Are Nothing But Tools, 2010. Photo: Park Myung-Rae.

One of the more memorable exhibitions of this year, for me, happened at the turn of it: Tiziana La Melia’s solo exhibition at Mercer Union, “The Eyelash and the Monochrome.” Through sculpture, painting and writing, La Melia culled a range of references, from Greek tragedy to teenage desires, to offer a delightful repose between the written word and the forms it takes. The rectangular shape of the page was echoed throughout—stencilled, draped over a banister, on the walls or in the form of a table. Here the polysemic play of narrative lingered on the relationship between its construction and interpretation by layering theatre, poetry, mythology and popular culture.

The title, “The Eyelash and the Monochrome,” alludes to the process of writing and the potential that exists in its absence. This absence, the space between thought and image, text and form, becomes a reminder of the blank page, the monochrome, and the unremitting blink of the cursor in an empty Word document. The regular intervals that signal the cursor’s presence, then absence, resemble the eyelash and the potential in or frustration of an empty page. The eyelash, or blink, does not refer to an instant or immediacy in comprehending meaning; instead it tarries with form and language. I found this interplay both humbling and refreshing as it collapsed hierarchies, given the shared creative agency between techniques, allowing space to contemplate the different directions narrative can take.

2. “Talking Back, Otherwise” at the Jackman Humanities Institute

The Jackman Humanities Institute (JHI) seems an unlikely place to have an exhibition. Being new to Toronto, I was a little turned around on my way there and even more unsure of my steps when I pushed the elevator button to the 10th floor. Entering the meandering corridors and stumbling across dead ends leant itself to my already bemused experience, though in many ways it only added to what I saw once there.

“Talking Back, Otherwise,” curated by cheyanne turions, explores the JHI’s annual theme of “Things that Matter” through asserting the evocative life of things. The boundaries between our past, present and future are questioned within the show by shifting and challenging perceptions of historical and societal narratives. In effect, the artworks actively present alternative modes of comprehending place, reality, identity and meaning-making by talking back. Their configuration, while blending into the institutional framework of the JHI, lends an expansive and refreshing voice to the diversity and complexities of our world.

Jérôme Havre’s work interrogates the ways in which we come to absorb and comprehend identity by concealing faces that might allow easy access to a colonial gaze. The formation of racist ideologies is also explored in Bethany Collins’s Colourless Dictionary as she actively erases the language that participates in its construction.

Maryse Lariviére’s My Pleasure Teardrop audibly brings attention to the making of meaning through subjective and social means. Through a small hole in the wall the contents of the artist’s book, Where Wild Flowers Grow, can be heard. In order to listen, visitors must take the position of an eavesdropper, listening in on a dialogue that contemplates the relationship between sensuality and creativity. Musings of the sensual resurface in the perceptual trickery of Valérie Blass’s La méprise (2015). An optical illusion that reflects what seems like a silhouette through a concave mirror becomes distorted as its features morph into grotesque proportions as something more or less phallic.

As the JHI remains in active use by students, the sheer presence of the artworks creates a dialogue, offering possible alternatives to individual and societal perceptions by, in essence, talking back through provocative tones.

Beom’s use of language and irony is multi-faceted, complicating how we come to understand and know the things that surround us. Pedagogical structures are comically put into relief in an instructional video, A Rock that was taught it was a Bird (2010), where a hired actor teaches a stone to be like a bird: to “perch on a branch” and “to fly up and land on another branch.” In Objects Being Taught They are Nothing But Tools (2010) various objects—an alarm clock, fan, bowl, scale, rope, watering can and more—face a chalkboard with a recording depicting the torso of a professor assuring the tools they should excel to nothing more than their intended function.

In the neighbouring room the objects’ role is questioned further as some take on the guise of others in An Iron in the Form of a Radio, a Kettle in the Form of an Iron, and a Radio in the Form of a Kettle (2002). Perceptions and attitudes around form and function are challenged again in the display of two plants, Untitled (Plants from the Places). Made entirely of shredded paper they mimic common household plants, though suggesting growth through the addition of more paper that is handily supplied beneath them. It’s a show that cleverly prods human intervention and our relationship to things by questioning the reducibility and efficacy of language—since, more often than not, it’s used against our better judgment.