Jacqueline Bell picks her art highlights from Alberta, including Brendan Fernandes’s use of dance and Hannah Doerksen’s nod towards spaces of mourning. 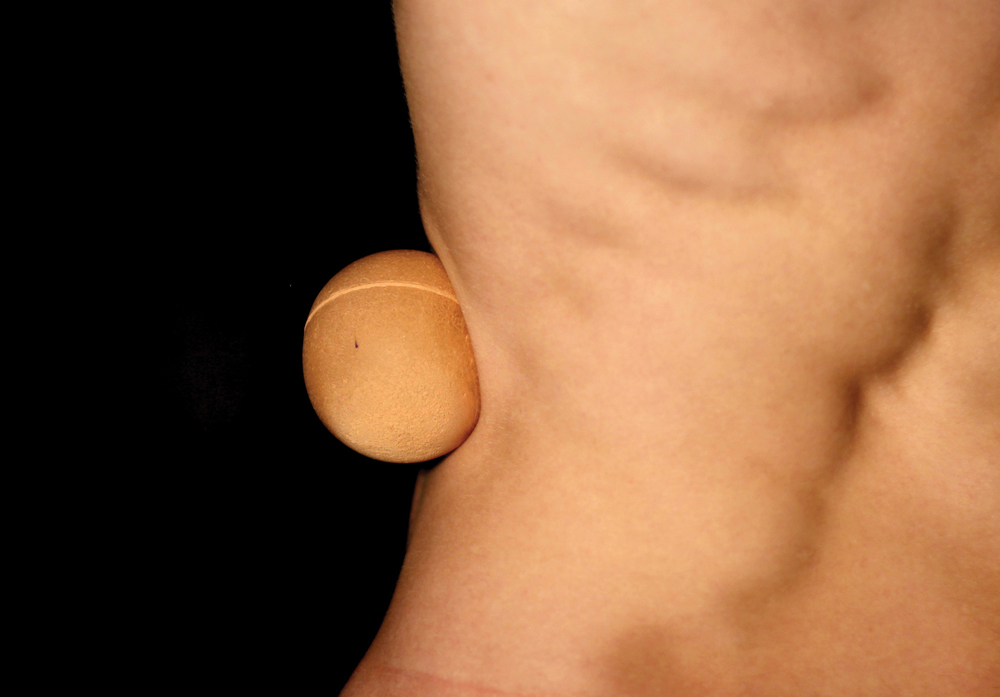 I attended “Still Move” on opening night. Three partial walls, each partially coated in a different swatch of flesh-toned paint, stood near the centre of the gallery. Dozens of acupressure balls, painted in a similar palette, were arranged seemingly at random on the gallery floor. Local dancers moved freely among the clusters of attendees, periodically picking up a ball and walking towards one of the gallery walls. Using the wall as a counterweight, they slowly ground the ball into a group of muscles, be it their shoulder, leg or lower back. At a certain point, they stopped, put down the ball and repeated the gesture anew. This was not dance in a sense I was accustomed to, although each movement looked utterly controlled. This was a performance of tension, and of its release.

The relationships between contemporary art and dance have received increased attention, but in “Still Move” Fernandes harnesses the dancers’ gestures to question the complex hierarchies at work within the dance world itself. In an interview with Art Metropole, Fernandes describes how, historically, few people of colour have been promoted to positions of “principal dancer” in ballet companies, relating their stringent top-down hierarchies . “At times, corps de ballet dancers [a group of dancers who are not soloists] will stand still for lengthy periods on stage. In contrast, principal dancers have the “privilege” to move the most; to dance solos and to jump freely,” says Fernandes. “Freedom is negotiated within the space of being able to move. Thinking of these spaces in relationship to labour, a corps dancer in stillness might be interpreted as being idle, but, in fact, they are still active, still moving and still labouring.”

“Still Move” validates the labour of the corps de ballet dancer. Through their slow, subtle movements, the dancers enacted a paradoxical relation to the institution’s walls, using them variably as a tool to release tension, while also applying pressure with literal force. The traces of this force became the documentation of the performance, as the flesh-toned paint from the acupressure balls adhered to the walls under pressure. Through this turn, the economy of the dancers’ gesture became the very source of its power.

2. Hannah Doerksen’s And We Have No Place To Leave And Nowhere To Come To in the 2015 Alberta Biennial of Contemporary Art, Art Gallery of Alberta

Scholar Jennifer Doyle begins her preface to Hold It Against Me: Difficulty and Emotion in Contemporary Art with a reading of Linda Montano’s 1978 video, Mitchell’s Death. Her face pocked with acupuncture needles, Montano recounts in a chant-like voice the experience of her ex-husband’s death, from the moment of learning about the gunshot wound to attending his funeral in Kansas. “Mitchell’s Death bodies forth the otherworldly texture of intense grief—that feeling of being removed from the world of the living, of feeling like a ghost, of being numb with it, of being lulled by the sound of grief’s rhythms,” writes Doyle.

This description of being annexed by grief came to mind when seeing Calgary-based artist Hannah Doerksen’s contribution to the 2015 Alberta Biennial of Contemporary Art. The installation work, And We Have No Place To Leave And Nowhere to Come To, referenced the interiors of funeral homes and places of worship: semi-public sites we often experience while mourning. The installation occupied a room in the larger gallery, and was fitted with rows of chairs facing a mirrored sculptural fountain. Artificial bouquets, fake plants on stands and thick, patterned drapes that gently oscillated flanked the seating.

And We Have No Place To Leave And Nowhere to Come To captured the banality of these spaces, but didn’t directly reproduce them. For example, Doerksen’s artificial bouquets were rendered from magazine images of sunsets, outer space, and large bodies of water. These vaguely psychedelic alterations left viewers feeling either out of place or out of time, recalling the strange sense of removal that grief produces. The work’s title refused any consolation, but the installation’s design offered the potential for narratives beyond those of isolation. This was still a place to congregate, to return us to each other.

In the spirit of end of year shout-outs, Alberta hosted a number of strong exhibitions this year by emerging and mid-career artists working in other parts of the country. Calgary saw the exhibition of Jacqueline Hoang Nguyen’s “Space Fiction & the Archives” at the New Gallery; Celia Perrin Sidarous’s “Interiors, Other Chambers” at the Esker Foundation; and Elise Rasmussen’s “Finding Ana” at TRUCK. Edmonton was host to Sarah Burwash’s “Sweet Smelling Ashes” at Latitude 53 and Taryn Kneteman’s “Everyday Rituals (survival tactics)” at SNAP.