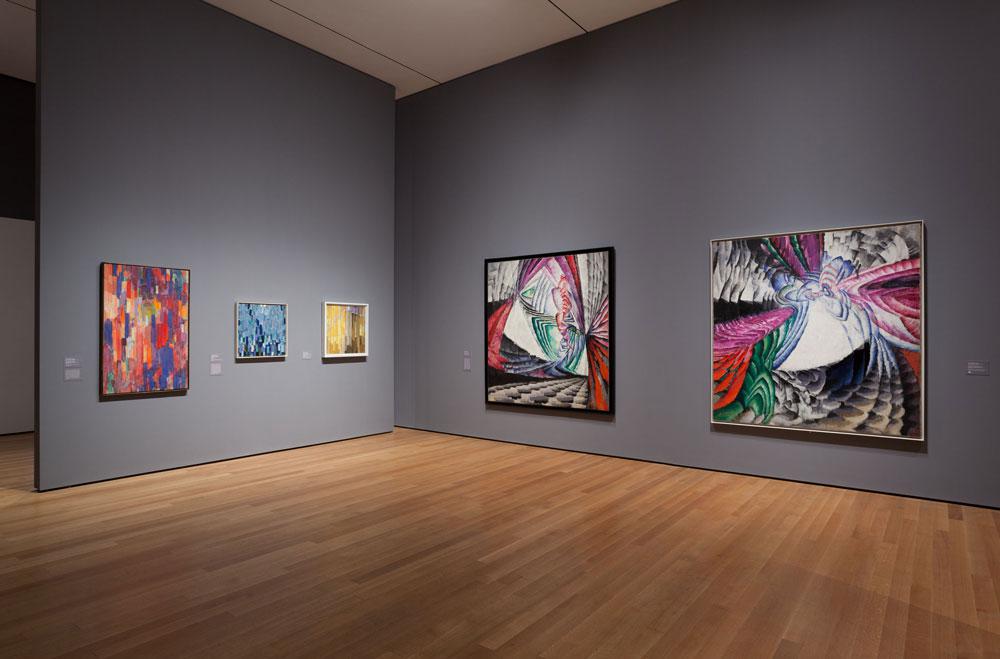 The diagram in “Inventing Abstraction 1910–1925” mapping the relationships between the artists represented in the exhibition. Names in red represent those figures with the most connections within the group. The chart was developed by the exhibition's curatorial and design team with Paul Ingram, Kravis Professor of Business, and Mitali Banerjee, doctoral candidate, Columbia Business School.

On a massive wall in the sixth-floor foyer that marks the entrance to the exhibition “Inventing Abstraction 1910–1925,” there is an equally massive wall graphic that attempts to visually plot, through fine, perfectly straight lines, the close social and artistic associations between the figures represented in the exhibition.

The lines busily converge on certain names, making aura-like bursts around the more famous and connected of the group; the words Pablo Picasso, Hans Arp, Vasily Kandinsky and Francis Picabia seem to optically vibrate as those fine lines identify them as epicentres of influence.

As a formal image, the chart is surprisingly complex and intricate, even beautiful in an infometric kind of way.

So it is ironic that this very same diagram, positioned as it is at both the beginning and the end of MoMA’s journey through the seminal moments in early abstraction, would also mark the vast conceptual divide between today’s visual-culture scrap heap and those halcyon days when one dared suggest a transcendent aesthetic or political potential to such compositions.

As the introductory wall text suggests, it is hard for most of us to even envision a time when abstraction didn’t exist. Very true.

But perhaps more to the point, it is also almost impossible for most of us to imagine a time when a grid pattern with inset primary colours or an off-centre black square on a white ground could cause anyone to get misty-eyed or frothy.

As scratch-and-sniff tests go, it is hard to get even the slightest whiff of radicality off these works anymore—the scent has simply dissipated in the winds of time.

Today, abstraction is—for better or worse—more likely to be something above our sofas than a call to the barricades.

So as an artist who makes something akin to abstract paintings, it was hard not to feel a little distraught by the general ho-hum-ness of my disposition in walking through what is really quite an attractive exhibition.

I have become increasingly aware that this personal malaise speaks not so much to any specific failure in the Modernist project, as much as to the occasional failure of my own fragile faith in the redeeming power of art.

I’m also aware that I’m not alone. If variety is indeed the spice of life and familiarity breeds contempt, then a hundred years of living the MoMA-Modern dream has, for better or worse, left most of us comfortably numb.

As a result, going to an early Modernist show can be a peculiar exercise in something between guilt and self-loathing; you pinch and prod and stare and pray that even a little bit of the once new, radical or even transcendent will wash over you.

And fair enough, some shows are better than others at doing this. But this particular exhibition hit a specific nerve: a chockablock survey full of some of the most seminal work of the period; the very works that you were taught to swoon over in art history class; the work you so vigorously defended against the giggles of less “sophisticated” friends, who always took great pleasure in pointing out the rather massive chasm between what these radical artists said and what the work looked like.

So, in truth, the process of staring down one’s own slide from faith to agnosticism around all these masterworks is never easy or pain-free. But as someone who is desperately trying not to take the final, lethal slide into outright abstract atheism, I found this exhibition particularly complicated.

But of course it did, and—let’s face it—you knew going into the show it would be pretty hard to screw up.

Some works positively shine when situated among their rightful peers: a wall of Malevich Suprematist pieces (always good); a couple of rooms of over-the-top Futurist works (a guilty indulgence); a wonderful set of exploratory works by Mondrian; and even some surprising drawings by Léger. There are works by Picabia, Duchamp, a couple of big paintings by Kandinsky… the list goes on and on.

There is a reconstruction of Tatlin’s Monument to the Third International as well as an instance of Brancusi’s still stunning Endless Column. There are also works by artists I am less familiar with, such as Czech artist František Kupka and English painter Vanessa Bell, that speak to the cosmopolitan nature of abstract experimentation between 1910 and 1925.

There is likewise a nod to both the dance and music experiments of the era, which provides some cultural comparables.

Add to this an incredibly ambitious catalogue and all in all, the show is very MoMA.

I’m always struck by the physical modesty of many of the early Modernist works.

Many are small, even delicate by today’s billboard standards. Much of the paint handling is tentative—even awkward—and you get the sense that real exploration is going on: steps between works are careful, and at times you can almost feel the trepidation as an artist takes baby steps towards a potential abyss of non-representation.

This tangible tentativeness remains one of the true delights of experiencing such work first-hand, and it is one that, despite our comfort in second-hand experience, no catalogue or website can ever do justice to.

But this modesty comes at a price.

First, it points to the gulf between the era’s bombastic aspirations and the actual art that was produced.

Secondly, it makes most of us aware of the sheer immodesty of most of the last hundred years of art production, which in turn makes these breakthrough experiments look decidedly diffident and shy.

It was hard not to chuckle when, standing in front of one of the large Kandinsky canvases on display, I was nudged by an older gentleman who had just spent five minutes reading the didactic panel on the wall.

“The ideas were certainly interesting; it is a shame about the art,” he declared as he dutifully moved on to the next explanatory panel.

It was hard not to agree at some level.

The period of 1910 to 1925 was one of tumult and energy, a time when artists were out at the very edge of aesthetic discovery and anything was truly possible.

As a result, the artists tended to talk and write like today’s mixed martial arts fighters: win or die, take no prisoners, my opponent is pathetic.

There is a both a charm and a pathos attached to these early avant-garde declarations when read through the dusty lens of a hundred years of so-called progress. In the end, clearly, no one won.

These texts also highlight the extraordinary disconnect between aspiration and production when it came to the topic of abstraction, and they draw attention to the issue of whether visual art could, in fairness, have ever been expected to carry so great a burden.

Artists simply don’t think like that anymore. One is reminded of critic Peter Schjeldahl’s sad admission in 1979’s “Rothko and Belief,” which still rings true today:

Art as substitute religion—and it was no less than this for Rothko, as for Mondrian—has disappointed us, and there is a general understanding that artistic grandeur is not worth the terrible human investment required to attain it. That’s the way things are. It would be more than a shame, however, to let our understandable present cynicism be made retroactive, denigrating great work created at the last tide of artistic faith…. Rothko lacked the wisdom of the seventies, which seems to be that belief in anything at all is messy and dangerous, and this does give us an edge on him.

I walked through the entire show, stopped at all the designated stopping points, and found myself, in the end, back at the big wall graphic.

Pondering the massive wall, I noticed that the chart’s design strategy seemed a bit more real and its names a bit more radiant after having walked through the exhibition.

But I was left feeling pretty much the way I came in—somewhere between sad and nostalgic for a world I never knew.