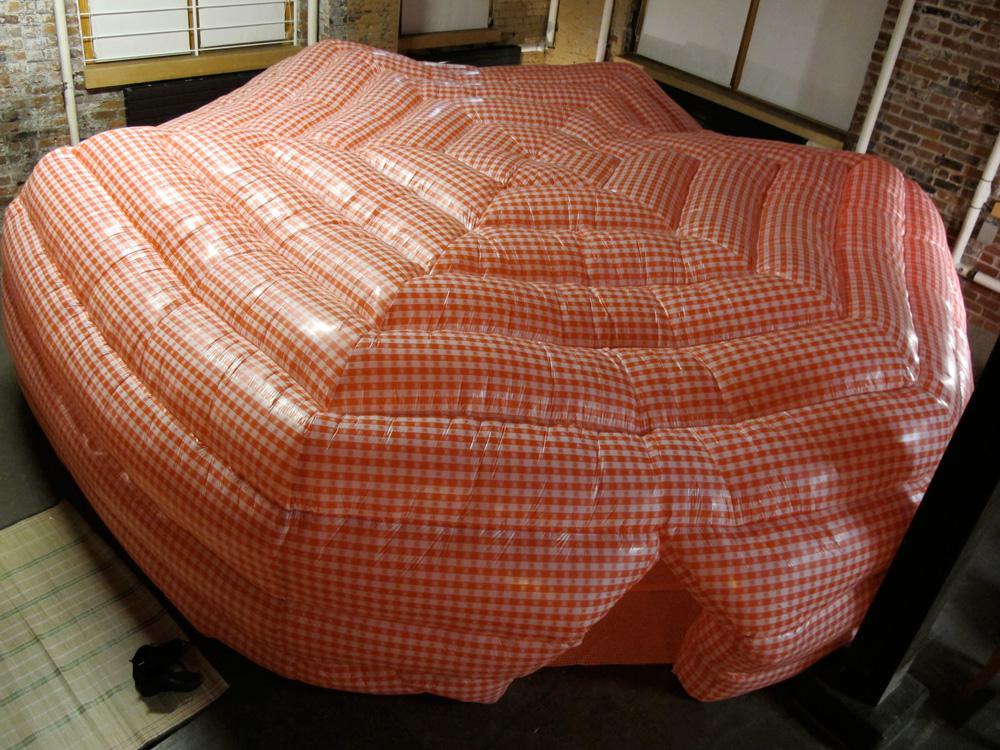 Keg de Souza‘s event-based project Gonflables et amuses-bouches, created as part of a recent three-month residency at Montreal’s Darling Foundry, acted as an exploration of art, food and politics, as well as an exploration of their individual and collective possibilities for community building.

Based in Sydney, Australia, de Souza is an interdisciplinary visual artist and self-described “anarchitect” who works on community-driven, large-scale interventions. Her practice often involves the creation of inflatable structures (in French, gonflables) and explores their possible role in developing embodied utopias. (As her friend and Montreal collaborator Danielle Lewis puts it, such work may suggest “the ways in which inflatable architecture can provide prototypes and platforms for resistant and alternative creativity in the everyday life of the city.”) Drawing on her personal experiences with squatting and organizing, as well as her interest in issues such as food security, spatial politics and community building, de Souza’s wider work also has a strong focus on community participation, and it is often intrinsically linked to the situated circumstances in which it is created.

Simply titled Food, the first event in Gonflables et amuses-bouches consisted of a by-invitation dinner and movie screening in early November. Together we watched and discussed Food, about Gordon Matta-Clark and Carol Goodden’s conceptual restaurant of the same name, directed by artist Robert Frank. The film documents the creation of one meal at the restaurant. Founded in 1972 in the SoHo neighbourhood of New York City, Food restaurant performed the activities common to all restaurants, but with an entirely different set of politics. The goal for the artists who participated in the restaurant project was not to generate income, or even to sell meals, but rather to bring together community and to create space for discussion.

Following the screening, participants were invited to a supper cooked by de Souza. The (vegan) supper was based on the meal eaten during the dining scene of Food—borscht, gumbo and bowls of fresh parsley—during which de Souza led a guided discussion about “utopias, radical spaces, art, architecture, radical organizing, food, food politics, and the ways which these themes can meet and intersect.” The conversation was recorded and formed a major portion of de Souza’s final output: a zine made about the project. Zine-making is commonly used in de Souza’s practice as a means of documentation and co-created critique.

The second event (held in mid-November), Feeding the Hand That Feeds You, was created specifically for participants of Montreal’s extensive student-run food sovereignty projects. Members of the People’s Potato—a vegan, student-initiated soup kitchen at Concordia University which addresses student poverty and educates around the politics of food (from access to quality) within a framework of a broader social and environmental justice platform—and its McGill University equivalent, the Midnight Kitchen, were invited to switch roles and be served a meal by de Souza. Participants played a series of food-related games which de Souza claims acted as metaphors for their collective organizing models.

On December 1, following its completion, the studio-sized inflatable structure was unveiled at A (Round) Picnic Table. De Souza painstakingly sewed together dozens of checkered plastic tablecloths, creating a massive tent-like structure which the general public was invited to come picnic in. De Souza also invited visitors to then discuss and draw—directly onto the floor of the structure—regarding experiences and memories related to food in Montreal. The participants, primarily members of the food-activism and artistic communities, collectively generated a map that intersected ideas around art, architecture, radical spaces and radical organizing.

The final invitation to the public was for a December 15 zine launch inside the inflated picnic tent, held in conjunction with a stone-soup-making party. De Souza invited all attendees to contribute a food item to the collective soup pot—an action which both symbolically and physically demonstrated the power of radically organizing around food.

I was able to participate in more than half of the public meals and discussions organized as part of Gonflables et amuses-bouches. In spite of my deep interest in food activism as a former member of the People’s Potato, my own work in the food industry as a server and cook, my personal interest in the ways in which food and art intersect, and the fact that my own family was once involved in running a restaurant, I had never considered the site-specificity of food activism in Montreal prior to de Souza’s project. Participating in Gonflables et amuses-bouches revealed how we take the radical food options available in Montreal for granted. De Souza’s work not only made visible the networks and systems present in food activism, but also showed the ways we can manifest and interpret their meanings. Gonflables et amuses-bouches was more than a temporary space to come together and teach each other about the pleasure and power of food—it demonstrated the need for communities to consistently come back to the table to cook up new ideas.

Amber Berson is a writer, curator and PhD candidate studying artist-run culture and feminist, utopian thinking. She recently curated "Utopia as Method" (2018); "World Cup!" (2018); and "The Let Down Reflex" (2016–18, with Juliana Driever). She is the Canadian ambassador for the Art+Feminism Wikipedia project.