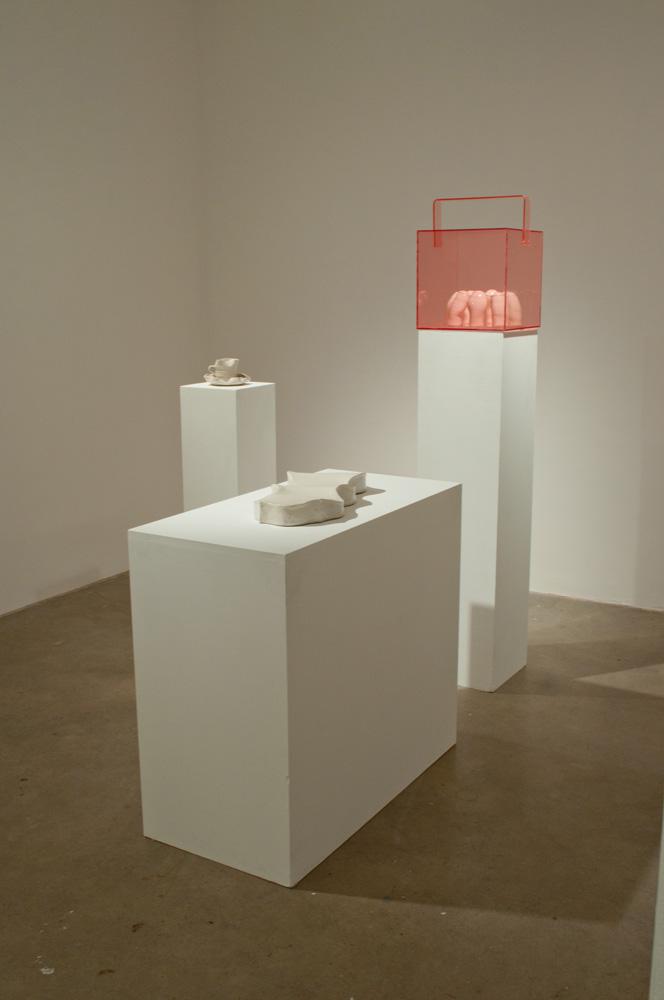 For his most recent exhibition at Vancouver’s Trench Gallery, Glenn Lewis presents ceramic vessels he made during a 2013 residency at Leach Pottery in St. Ives, Cornwall, paired with pictures he captured of the surrounding town. Some of these pictures are from his recent residency, while others are from 1962, when he was apprenticing under master potter Bernard Leach.

The exhibition is broken into four parts. On the east wall are a series of framed and matted 17-inch-by-21-inch pictures hung above bowls positioned atop clear Plexiglas ledges; inside each ledge, a mirror is angled at 45 degrees so that the bowl’s undersides can be seen. On the wall opposite, a similar system is in play, only this time the vessels are lidded pots. On the south wall, there’s an array of six pictures; in the room behind them, three Plexiglas and ceramic sculptures (a wilted cup, penile salt shakers and an abstraction) intend to highlight the artist’s technical and aesthetic range.

Most of the pictures on the east wall are close-ups of the town’s exterior walls, while those above the lidded pots are, like the south wall array, comprised mostly of open landscapes (a farm, a mine, a pit). Lewis’s affection for the town’s walls and his decision to juxtapose pictures of them with his ceramics is not lost on a viewer who notes similarities between the wall’s time-worn surfaces and those of the artist’s glazed bowls. However, in considering these open bowls and their tightly framed companions in relation to the lidded pots and their corresponding open landscapes, the viewer is reminded of the student of 50 years ago who, when not learning how to knead clay or mix slip, listened as Leach spoke of his own lessons learned while studying in Japan, where that which appears closed is in fact open, and that which the West calls craft is, in the East, indistinguishable from art.

While it is sometimes difficult to distinguish between a vessel made in dynastic Japan from a vessel made today, the same cannot be said of Lewis’s pictures, the earliest of which were shot on 35mm slide film, while the more recent batch were captured on a digital SLR camera card. For some, this might not seem like a big deal, since the narrative conceit of these pairings is intended to lie in their pictorial and utilitarian content, where the town that existed in 1962 is indistinguishable from the one seen today. (Indeed, Sandowns Lane looks like it might have when Lewis first stopped to look at it 50 years ago. Same with the wall at Old China Clay Pots, and the one next to it, at Barnawoon.) Yet if the viewer is asked to look at and appreciate a fired vessel as both a work of art and a work of craft, then the same must apply to pictures made with a camera. Here, it is the relative instability of the film medium that, unlike the historic pot, cannot disguise its passage from one system (film) to another (digital), and one is reminded that to recognize and understand such a difference belongs as much to craft as it does to art.

Had Lewis merely placed his pots on a plinth or a wooden ledge and left the viewer to contemplate the pictorial and utilitarian content of his pairings, questions concerning these changes in picture-making technology would have lingered in the gallery like the proverbial elephant. Instead, the viewer—and the vessel—are provided a support system whose angled mirror remains a feature of both film- and digital-camera technology. This support also allows us to see what our fingers want to reach for and turn over—an impulse at which art’s brain, not craft’s heart, still shouts, Don’t touch!