George Sawchuk: The Forest as Gallery, and Studio 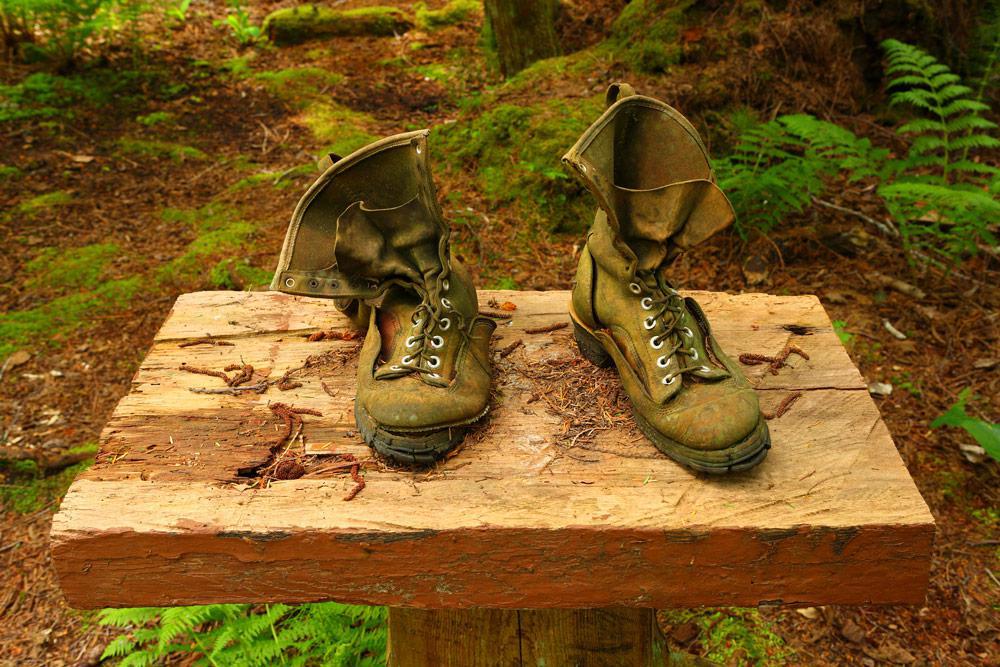 A sculpture by the late George Sawchuk in his Forest Gallery, located adjacent to his home on Fanny Bay, Vancouver Island. Photo: Ron Pogue. (Image 1/18)

The attribution of artist to place seems quaint when the artist of today is known more for her mobility than the town from which she emerged. That said, when global art festivals list their participants, it is the town or country—not the province or state—that the artist is associated with. Shary Boyle is a Toronto artist. Shary Boyle is a Canadian artist. If Shary Boyle is an Ontario artist, one wonders what that means.

George Sawchuk (1927–2012) is a British Columbia artist, and in identifying him as such a number of factors come into play. The first concerns the nature of his work, which is just that: the natural landscape—that is, the forests that provide the material basis of his sculptures (what he calls “portables”), but also, in the case of his Forest Gallery that surrounds his Fanny Bay home, their setting. Another concerns the artist’s relationship to the forest as a place his childhood self sought refuge in, a place to play; then, years later, as a place to make art, after an industrial accident cost him his leg.

In a documentary shot by Mary Alice near the end of his life, Sawchuk talks about his earliest days in the forest, how he would find things like a discarded water faucet and attach it to a tree; how that relationship changed the way he looked at faucets, but also the way he looked at trees; and how the two combine to form a new thing. In the same way, one of his heroes, Marcel Duchamp, changed the way we look at urinals, snow shovels and bicycle wheels; and in perhaps a similar manner, the subtle surrealism of René Magritte causes us to look once, then again, then again and again, until it is not what we are looking at but the looking itself that becomes the object of our attention.

Over time, Sawchuk began to fashion hinged wooden books inside which he would enter homilies from the Bible, Alfred Lord Tennyson, Karl Marx or his own imagination, then insert these books into notches he cut from tree trunks. In some cases, these books became imprisoned by the growth of the very trees that he had selected to protect them, a contradiction that would not be lost on the artist.

As with anyone who has studied Marx, Sawchuk is sensitive to contradictions, and this might explain what author and curator Grant Shilling has referred to as the artist’s “culturally modified trees,” which also include mirrors and, in other instances, ropes threaded through drilled holes, ropes that, in the midst of these living forms, begin to look more like flaccid boughs than what we might tie to a bough to make a swing.

These are the kinds of propositional works Sawchuk fashioned in his Forest Gallery, a total work of art that is ongoing and available through public trails. The Sawchuk exhibition currently at the Comox Valley Art Gallery is another story.

Before proceeding further, I should say that my visit to Sawchuk’s Fanny Bay Forest Gallery and his exhibition at the CVAG was part of a larger tour of Vancouver Island that began first with visits to the Art Gallery of Greater Victoria and nearby Open Space, then up the Malahat to meet with Nanaimo Art Gallery interim director Jesse Birch, who is about to mount a fall exhibition, entitled “Black Diamond Dust,” on the topic of coal.

The purpose of this trip, like another trip I have planned through BC’s Okanagan in mid-August, is to explore and report on the exhibition and reception of contemporary art in areas outside the province’s Lower Mainland. To what end, I am still not sure. But as Vancouver has become an increasingly unliveable city (a city Sawchuk himself gave up on when he left North Vancouver for Fanny Bay in the late 1970s), something has to give. And what that giving might look like could include Vancouver’s emerging BFAs taking their art eyes and ears into the province’s less expensive rural regions, where, with the advent of the Internet, moves like these are seen less as intrusions than as meetings of like minds.

At what was billed as a Canada Day potluck related to the CVAG show, Sawchuk’s life partner Pat Helps opened her home for an afternoon of talks and readings by Shilling, poet Elizabeth Bachinsky and author Terry Glavin, all of whom contributed something to our knowledge of a man who was born in Kenora, Ontario, educated by Roman Catholic priests and Bolsheviks until the age of 13, then set out on a 38-year career as an itinerant labourer.

Just as for the poet Al Purdy and the photographer Fred Herzog, it was during his itinerant years that Sawchuk learned about life and art from those he lived and worked with, an education that he had shared not just with the artists and writers in attendance on July 1, but those from all walks of life. But as much as the afternoon’s talks and readings shed light on the life of the artist, and the Forest Gallery on the artist’s abilities, it was the availability of his studio/workshop, with its warm wooden walls, its orderly workbench and clustered portables, that remained with me as I toured Sawchuk’s CVAG exhibition the following day.

Comprised of three elements (Sawchuck’s mostly free-standing portables, a glass-covered table of drawings and documentation, and wall-mounted colour photographs of the Forest Gallery by George Harris), the CVAG exhibition comes as something of a letdown. While it was pleasurable to move around Sawchuk’s altar-, podium- and telephone booth–like portables (some of which are built atop separate rounds of wood, others where the log is halved or inset above what is in effect a “built-in” base), the presence of the gallery’s white walls and static lighting turn the space from a neutral modern cube to something less complementary, more clinical. As for the wall-mounted photographs, they are more documentarian than artful, and do little to dim the walls on which they hang.

Most pleasing was the table Shilling had arranged, particularly the drawings Sawchuk made on the backs of unused Fanny Bay Volunteer Fire Department cheques, a work that the gallery had reproduced as a multiple through the North Island College Fine Arts & Design Program, with support from the North Island College Foundation. That these reproductions are enclosed within an early N.E. Thing Company letter-sized envelope is a reminder that Sawchuk once lived beside the collective’s principals, Iain and Ingrid Baxter, in North Vancouver. Also included in this display are black-and-white photos Iain (now IAIN BAXTER&) took of Sawchuk drilling holes into North Van’s then-plentiful supply of trees, as well as many more drawings that, in their attempt to reduce sensation to the level of motif, bring to mind the work of another neighbouring artist who left town for the country—Hornby Island’s Jerry Pethick.

A clarification was added to this article on July 28, 2014, to indicate that a documentary shot near the end of Sawchuk’s life was created by Mary Alice.