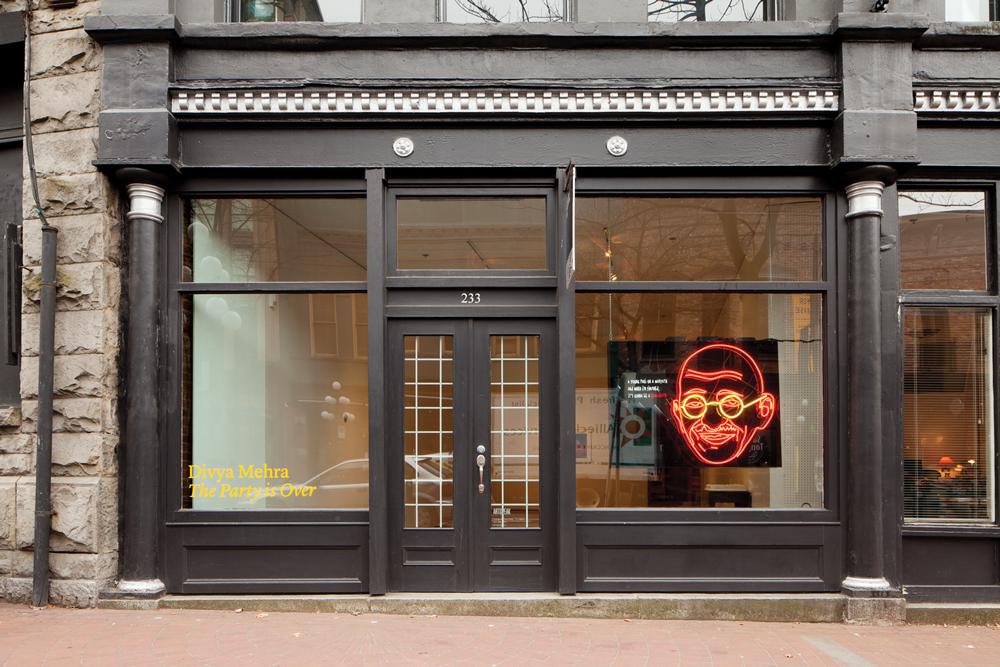 Divya Mehra I will split up my Father’s empire (after N.W.A.) 2011 Installation view / photo Blaine Campbell

Failed parties and partitions are no laughing matter, unless you’re Divya Mehra. The artist, who splits her time between her hometown of Winnipeg and New York City, hardly shies from rubbing people the wrong way.

On a late Friday afternoon during Grey Cup weekend, as commuters in Vancouver headed home or out of town, those who looked up into the clear sky may have noticed an airborne off-site project: a nondescript aerial banner flying overhead. In plain red lettering, the banner read: “PRICE IS RIGHT LOSING HORN.” With the sort of grandeur reserved for elaborate marketing campaigns, Mehra displayed a coded message—a private inside joke—in the most public of spaces. It was a grand gesture that pointed to the lacklustre reality behind self-aggrandizing celebrations, and it was the kick-off to her exhibition “The Party is Over.”

In 2011, Vancouver celebrated its 125th anniversary; the metropolis grew out of Gastown, one of several booming sawmill communities in the region in the mid-19th century. Last year also marked the 25th anniversary of Artspeak. While one might assume “The Party is Over” would make overt references to these anniversaries, the exhibition hinged on the ongoing non-resolution of India’s independence from the British Empire, the violent birth of Pakistan, and our contemporary context for understanding historical celebrations.

Mehra’s first Canadian solo exhibition, “Turf War.” (2010), at Winnipeg’s PLATFORM Centre for Photographic and Digital Arts, was lauded for its blistering revisions of racial and pop-cultural stereotypes of Indian and Pakistani relations from Partition to the present day. At Artspeak, she presented a new body of work that captured the whimpering disappointment of unsuccessful celebrations. Failure was immediately in the air; as visitors walked into the exhibition, they were greeted by a stench of decay care of the piece There’s just not enough to go around. (2011), a subtle and clever work consisting of an antique British mahogany parlour table bearing an increasingly stale and moulding cake iced with a map of Kashmir.

Mehra turned 30 in 2011, and she spent the summer on the Indian subcontinent documenting the nationalist uprising led by Anna Hazare, who echoes Mahatma Gandhi’s use of non-violence in calling for the end of corruption in India’s government. The Pleasure of Hating (2011) shows two young boys, one wearing a red T-shirt reading “MURDABAD” (“die forever”) and one wearing a blue T-shirt reading “ZINDABAD” (“live forever”), photographed in a moment of tension. The implied violence of the image seems at odds with the playfulness of red-versus-blue, a motif carried forward from Mehra’s earlier works, which reduce complex dichotomies to primary colours in the manner of opposing gangs’ colour-coded clothing.

“The Party is Over” had an air of the demure alongside the absurd. Like any failed celebration, it left viewers straining to see the humour.

This is a review from the Spring 2012 issue of Canadian Art. To read more from this issue, please visit its table of contents.