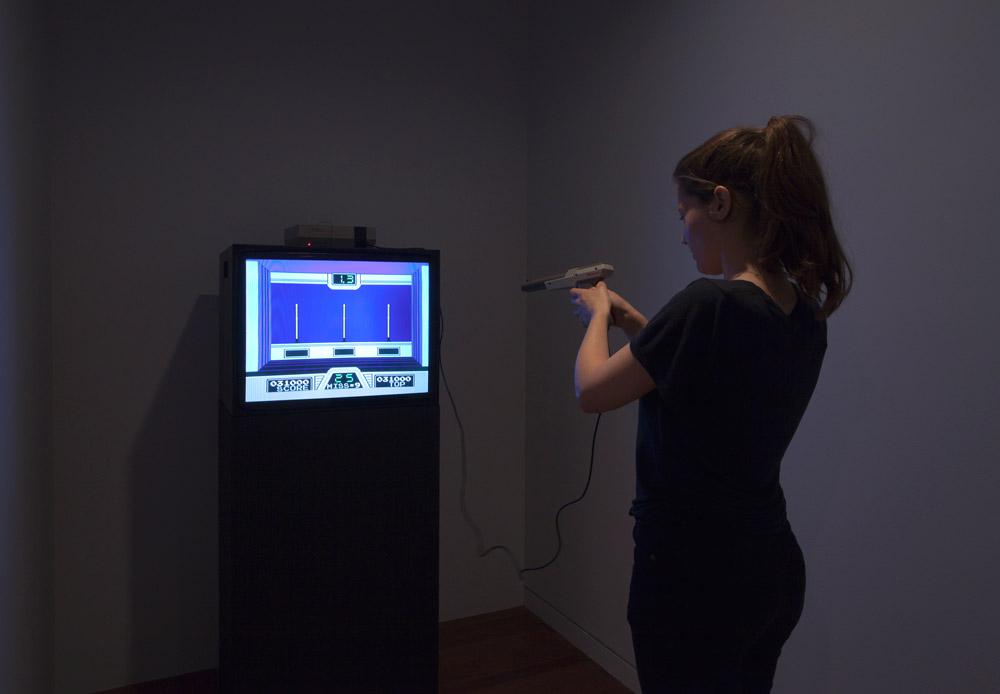 In his first major Canadian exhibition at DHC/ART in Montreal, American artist Cory Arcangel explores technology’s relationship to culture and its rapid obsolescence by repurposing and masterfully modifying what could be interpreted as contemporary incarnations of Marcel Duchamp’s readymades: YouTube clips, video games, music videos, films, computer data etc. As the Dada artist of the digital age—indeed, many of his works were Internet memes before they were shown in galleries—Arcangel messes around with the internal workings of systems, and his slight modifications to video games and other software both celebrate and critique technology and the open-source culture of the web.

Text and context is another area of practice. The title of this show, “Power Points,” refers to the ubiquitous software used to make presentations. Further, it is printed in Comic Sans on the wall texts and gallery guide—a modification to the Helvetica-like font usually seen at galleries that is also a work called Sans Comic (2013). It sets the exhibition’s playful tone. His interventions also extend to the exhibition press release that was distributed through e-flux, in which he replaced all of the w’s with underscores.

Arcangel’s primary interests and mediums are finding increasing acceptance in the contemporary art world—a transformation one might give him some credit for. Less than one year ago, the Museum of Modern Art in New York announced its acquisition of iconic video games, a decision that caused a stir in some sectors. With that announcement, objects that could once only be found in suburban basements were also now part of the collection of an international art institution.

Interestingly, it is the history of Modern painting that comes most to mind at the start of the show. In the exhibition’s first room, works from Arcangel’s Photo Gradient Demonstrations series offer a renewed perspective on colour-field painting. A plush purple carpet covers the floor while brightly hued pixels are arrayed in enormous expanses on the walls. Blues, fuschias and lime greens fade into each other seamlessly; while some works have thin vertical lines that might evoke Barnett Newman’s “zips,” others look like works Mark Rothko might have made if he had owned a MacBook.

No brushstrokes are visible in these “paintings,” however. Instead, the artistry of mixing pigments is eclipsed by the click of a computer mouse; the works were made using Photoshop’s gradient tool and, printed on high-quality paper, are as large as nine feet tall. Whereas some might say, “I could do that” in response to the works of the Abstract Expressionists (Canadians will remember the Voice of Fire controversy at the National Gallery of Canada), questions of authenticity and authorship arise more explicitly in Arcangel’s works. The works’ titles refer to precise formulas visitors can use to recreate them with Photoshop. (Photoshop CS: 30 x 30 inches, 300 DPI, RGB, square pixels, default gradient “Russell’s Rainbow,” mousedown y=5000 x=2300, mouseup y=5000 x=4100 (2013) is one example).

These first works also bring to mind Andy Warhol, who stated: “The reason I’m painting this way is because I want to be a machine.”

Warhol comes up again in another gallery, where visitors can earn their 15 minutes of fame by playing I Shot Andy Warhol (2002). In this modified version of the Nintendo game Hogan’s Alley, players take on the role of Valerie Solanas and use a plastic zapper gun to “shoot” targets that include pixellated representations of Colonel Sanders, the Pope, Public Enemy’s Favor Flav and, of course, Warhol himself.

In another video-game modification titled Self-Playing Nintendo 64 NBA Courtside 2 (2011), Arcangel has reprogrammed a Nintendo 64 game to evoke the promises and failures of video games and other electronic devices. A video projection shows a digital basketball player consistently missing the hoop; the ball bounces on the backboard or the rim of the net. In the end, all he can do is fail better.

Bringing up notions of skill and fortune in a different way is Drei Klavierstücke, op. 11 (2009), for which Arcangel spliced together YouTube clips of cats on pianos and matched them to a Glenn Gould recording of an avant-garde composition by Arnold Schoenberg. As a result, these cats—who lack any ambition or intentionality—almost never miss a note as they “play” an atonal piano piece by the composer. Some clips show owners taking the paws of their beloved felines in hand to pretend to play a piece, while others show cats asleep on the keyboard. Here, YouTube clips serve as readymades: the found films are given new meaning through re-contextualization.

Arcangel’s work mirrors Schoenberg’s piece through a sense of egalitarian processes and systems. Part of this effect has to do with the fact that Schoenberg invented the 12-tone method of composition to ensure that all of the chromatic scale’s notes were given equal importance. Another part of it is that Arcangel’s works draw on remarkably broad sources, and are often available in some form on YouTube. In line with his commitment to transparency and open-source methods, the artist also includes the code for several works and a detailed explanation of how he made Drei Klavierstücke, op. 11 on his website. Indeed, Arcangel’s comparable attention to “low art” and “high art” has a bridging effect: introducing Schoenberg into mainstream Internet culture and offering cat memes to an art-gallery crowd.

In Super Mario Clouds (2002), a work that achieved Internet fame before it was acclaimed at the 2004 Whitney Biennial, tangled cables hang from a monitor that is displayed in an upper corner of DHC/ART’s annex space. The modified version of the Nintendo game Super Mario Brothers playfully connects with the collective memory of the millions of people who have played it. Arcangel’s intervention involves editing out everything except for the game’s infamous backdrop: puffy white clouds floating across a pixellated blue sky.

Viewers are required to look up to see Arcangel’s clouds, an impulse that is usually experienced outside rather than in front of a screen, and the inherent artificiality of Arcangel’s cumulii contrasts with real clouds seen through an adjacent window in the exhibition space. The wonderfully trivial piece is almost calming and meditative, but at the same time disquieting; looking at clouds usually inspires imagination, but in this case they only seem to encourage mindless absorption. Still, their effects edge on the sublime, especially for those who have played the game in childhood, and one wonders if this work might provide a contemporary version of John Constable’s vaunted cloud studies, ringing and resounding to the rhythm of our contemporary age.

Sound is another successful element in the exhibition. The chimes from the Super Mario piece resonate in the gallery space along with sounds emerging from other works nearby: the quiet rumbles of kinetic sculptures made from silver stands titled Research in Motion (Kinetic Sculpture #6) (2011) or the guitar introduction to the Guns N’ Roses song “Sweet Child O’ Mine” which comes from a looped video projection in DHC/ART’s largest exhibition space. As in a musical score, every work is playing its own part, and a melody seems to emerge when they are heard simultaneously.

Sound art as a genre also makes an appearance. In the aforementioned Sweet 16 (2006), Arcangel borrows phasing and looping compositional techniques often used by minimalist composers such as Steve Reich. Two identical compositions that initially sound in unison at the same tempo gradually shift apart over time, the instruments in one playing a little behind the other. The piece is accompanied by duplicate videos of the band projected side by side; these also start in unison and then become discordant before the cycle repeats itself.

The last room of the exhibition is the smallest space, which reflects the intimate nature of the work it contains. For Data Diaries (2003), Arcangel transformed one month of his activity on the computer into pixellated patterns. All e-mails sent, files opened, downloads, browsing histories and tabs closed were accessed by QuickTime and converted into graphics via a bug in its programming. At DHC, these are projected onto a wall. The work evokes a personal awareness of how new technologies intervene in our everyday lives, and it points to the tremendous amount of digital data that can be accumulated over a lifetime.

The element of time is another important part of Arcangel’s work. It might take a few months for every pixel in the film Colours to appear in a work that projects the 1988 feature by Dennis Hopper one horizontal line of pixels at a time. (The soundtrack is left intact.) Similarly, e-mails are sent back and forth perpetually in Permanent Vacation (2008), a work made from two computers that send each other out-of-office messages.

Moreover, Arcangel’s work remains specific to a particular time; it will be interesting to see how a generation that never played Super Mario or knew of Guns N’ Roses will receive and interpret the work.

Arcangel’s medium will inevitably become outdated in a few years, as few things age faster than technology. The artist often takes a retro stance; both Super Mario Clouds and I Shot Andy Warhol were made almost 20 years after the games they were based upon were released. Perhaps this helps to inoculate the work against technology’s rapid rate of change. The strategy might also help reconcile many viewers with their nostalgic sense of loss and longing for the simplicity of early video games.

What Arcangel makes of emerging technologies—like Vine and Instagram—is something that remains to be seen, but for the moment, he very well reveals how we derive meaning from the ever-less-tangible realities of everyday life.